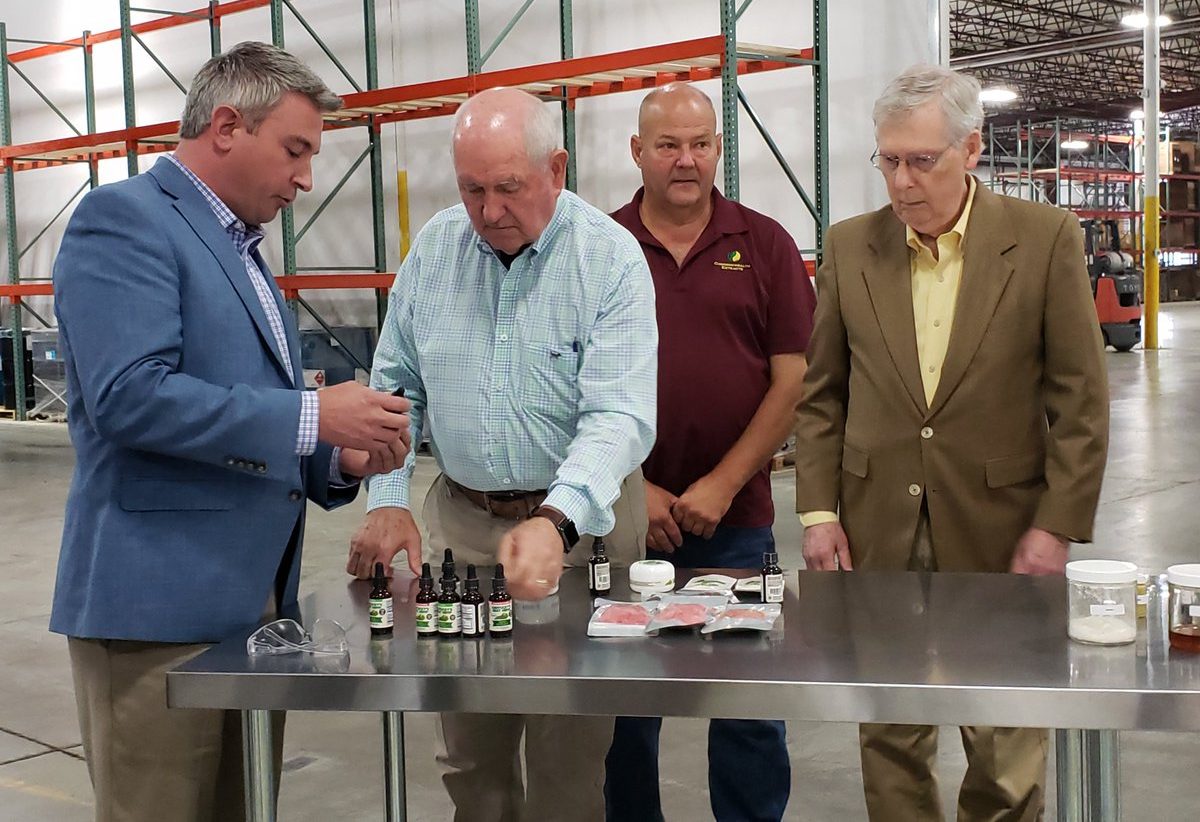 Mitch McConnell is all about hemp.

And now he’s personally leading the U.S. agriculture secretary on a tour of hemp facilities in his home state of Kentucky.

Sonny Perdue, who heads the U.S. Department of Agriculture (USDA), accompanied McConnell on a visit to the Commonwealth Extracts facility in Louisville on Tuesday, where the officials got a chance to see hemp-derived CBD products up close.

Calling the hemp industry “already a terrific business,” McConnell said that the government is in the “final stages of getting us where we need to be” in terms of regulations.

But he did point out one ongoing issue: Hemp businesses’ access to financial services like bank accounts and credit.

“The big banks, related to credit cards, need to be convinced, and we hope to explain it to them,” he said. “The law is pretty clear. This is a legal product.”

Perdue agreed, noting that hemp is often “conflated with its illegal cousin” marijuana.  “The financial industry has to accept that this is legal crop,” he said.

.@UKAgriculture is the brain trust of the hemp industry. Hemp is an interesting burgeoning industry with a lot of opportunities & a lot of challenges — that’s why it’s important to get out & listen to the folks of KY ag. Appreciate Dean Cox hosting this important hemp roundtable. pic.twitter.com/jB9UMjitIJ

The agriculture secretary gave McConnell credit for having “created a lot of interest all across the country in this product and in this crop.”

“We are hopeful it will be the real bonanza in so many products,” he said.

It is a true honor to join @SenateMajLdr to show @SecretarySonny around Kentucky’s thriving ag industry. We started off this morning with a tour of a Jefferson County hemp processor. Kentucky hemp processors reported $57 M in gross product sales last year. #KyAg365 pic.twitter.com/EsbswMa3bZ

The majority leader, for his part, said that the growth of the hemp industry “reminds me of where tobacco was when I went to the Senate.”

Contrasting declining workforce numbers in Kentucky’s tobacco industry, he said that “there are a lot of young farmers and processors here who are excited about [hemp], and we’re glad to be in the lead.”

McConnell demurred when asked by a reporter if broader marijuana legalization is inevitable.

Perdue said he was glad to hear from hemp industry participants about “the challenges and opportunities in this burgeoning crop,” noting that in addition to financial services access problems, businesses also face “logistical issues over moving product back and forth.”

“This is not a controlled substance,” he said, noting that some hemp crops have been seized by local law enforcement officials who thought they were interdicting marijuana. “We’ve got some education for public servants across the country who think they’re doing their jobs.”

While Perdue previously said his department won’t rush hemp implementation despite a desire from McConnell and other lawmakers to get state programs up and running around the country, USDA is planning for national rules to come online in time for the 2020 planting season and last week quietly announced it intends to issue a final interim rule on the Farm Bill’s hemp provisions next month.

.@senatemajldr @KYAgCommish and @SecretarySonny are in Louisville discussing the final stages of getting hemp where it needs to be after legalization pic.twitter.com/76uZ1zzdrx

USDA has also begun accepting applications for hemp intellectual property protections and clarified that farmers can import hemp seeds from other countries. And in May, the department issued a memo ruling that states cannot block legal hemp shipments from crossing their borders, even if they do not allow cultivation of the crop.

Meanwhile, McConnell—who used a hemp pen to sign off on the official version of the Farm Bill last year—has made his successful fight to legalize the crop a centerpiece of his 2020 reelection campaign.

He is also pressing the Food and Drug Administration to swiftly enact regulations allowing the use of hemp-derived CBD in food products and dietary supplements.