The federal marijuana legalization bill passed in a historic vote last week by the U.S. House of Representatives would generate about $13.7 billion in net revenue for the U.S. treasury over the next decade, according to a new report by the Congressional Budget Office (CBO). It would also cut federal prison spending by nearly $1 billion.

Most of the new funds—roughly $8 billion—would come from business taxes on the legal marijuana industry, such as income and payroll taxes. A separate excise tax, initially based on the price of cannabis products, is estimated to yield another $5.7 billion.

“CBO and the staff of the Joint Committee on Taxation estimate that H.R. 3884 would increase revenues, on net, by about $13.7 billion over the 2021-2030 period,” says the nonpartisan report, published Friday.

Known as the Marijuana Opportunity, Reinvestment and Expungement (MORE) Act, the House-approved legislation would remove cannabis from the federal Controlled Substances Act, expunge past marijuana-related convictions and require certain criminal cases to be resentenced.

Those changes “would reduce time served by 73,000 person-years” among current and future inmates, the report says. “CBO estimates that provision would result in net savings of about $1 billion over the 2021-2030 period.” 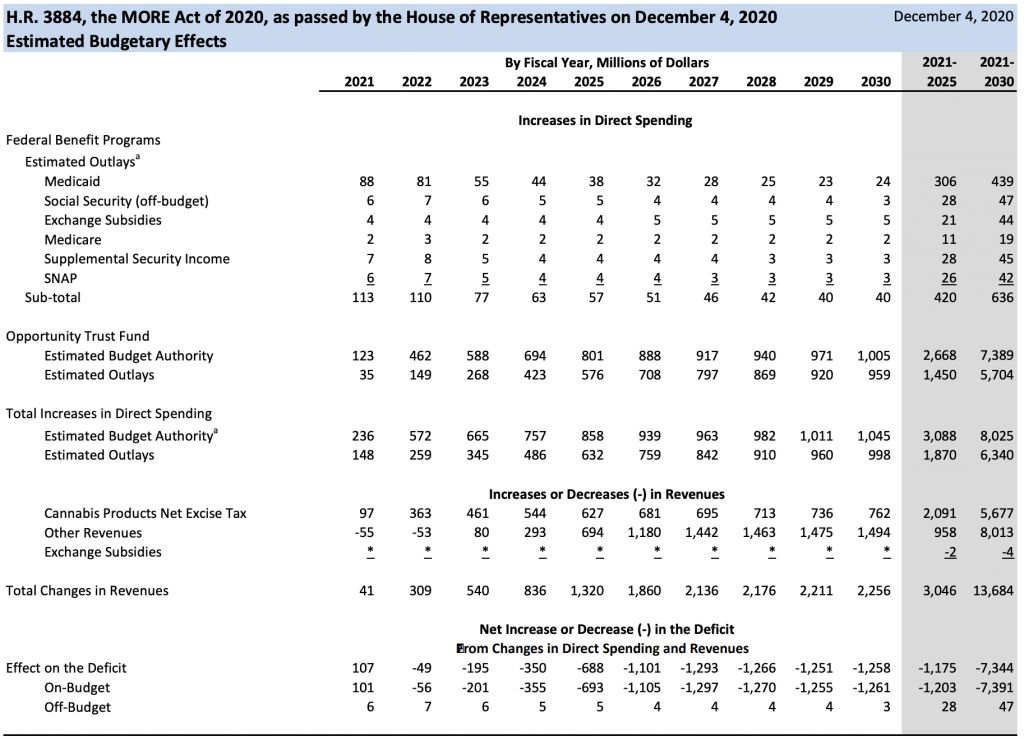 Legalization would also bring additional government costs, the CBO report says, though all spending would be entirely offset by new revenue.

The expected reduction in the federal prison population, for example, would lead to an estimated $636 million in new spending on federal benefits programs, such as Medicare and Medicaid.

“Federal prisoners generally are not eligible for these benefits,” says the report. “By reducing the prison population, CBO estimates, H.R. 3884 would increase the number of federal beneficiaries, compared with current law, and thus increase direct spending for federal benefit programs.”

The $5.7 billion in expected revenue from the marijuana excise tax, meanwhile, would go into the so-called Opportunity Trust Fund. From that, an estimated $3 billion would be spent by the Department of Justice over the 10-year period to provide job training, legal aid and other services to disproportionately impacted communities. The remaining $2.7 billion would go to the Small Business Administration to be used on state and local grants to cannabis-related small businesses that help develop licensing rules.

It wasn’t immediately clear whether the CBO report analyzed the bill as originally introduced last year or included the impacts of new changes made to the legislation last week that would adjust cannabis excise taxes as the market matures. Under the amendment, the excise tax would initially start at 5 percent of a product’s cost, then increase over time to 8 percent and later shift to a weight-based tax.

In any case, supportive lawmakers held up the new CBO score as one more reason to pass the legislation.

“It was sad that my Republican colleagues were unable to understand why we voted to reform our failed prohibition of cannabis. They don’t care about honoring the will of the people and they are unable to grasp the enormity of the racial injustice and damage by selective enforcement against young Black and Brown Americans,” Rep. Earl Blumenauer (D-OR) said in a press release. “But the CBO score may have some other reasons for them. It shows that the MORE Act would reduce 73,000 person-years of prison time. It would increase revenues by $13.7 billion. It would provide $3 billion for job training and legal aid to people harmed by the war on drugs. While doing all of this, it would reduce the deficit by $7.344 billion.”

The new CBO report was a long time coming. The office is supposed to assess the financial impact of most bills that advance out of congressional committees, but it’s been more than a year since the MORE Act won approval from the House Judiciary Committee.

Only a handful of marijuana-related bills have been scored by CBO in the past. Last year, the office said that a proposed marijuana banking bill would save federal money and lead to a $1.4 billion increase in deposits to banks and credit unions starting in 2022, which the office said would rise to roughly $2.5 billion by 2029.

Measures related to marijuana cultivation for research purposes, clinical trials of medical marijuana by the U.S. Department of Veterans Affairs (VA) and letting VA doctors recommend marijuana to patients, meanwhile, were all estimated by CBO in recent years to have little to no effect on the nation’s budget.

While the MORE Act faces an uphill battle in the Senate—some have called the issue a nonstarter unless Democrats gain control of the chamber—legalization proponents have nevertheless cheered the bill’s House passage as a major milestone.

Blumenauer, a longtime champion of cannabis reform, said the bill is “going to make a huge difference for people all across America as Congress starts to catch up to where the American public is.”

Senate Majority leader Mitch McConnell (R-KY), for his part, is one of numerous Republicans in Congress who criticized House leadership for even holding a vote on the measure last week.

This story was updated to include comment from Blumenauer.