A bill that would allow doctors at the U.S. Department of Veterans Affairs (VA) to recommend medical marijuana to military veterans would have zero fiscal impact, the Congressional Budget Office (CBO) said on Wednesday.

The office estimates that there would be no additional expenses associated with allowing VA doctors to issue cannabis recommendations. That’s largely because VA doctors already “discuss various treatment options with their patients in the course of providing health care” and so including conversations about filling out medical cannabis recommendation paperwork would not be a significant departure from current policy. 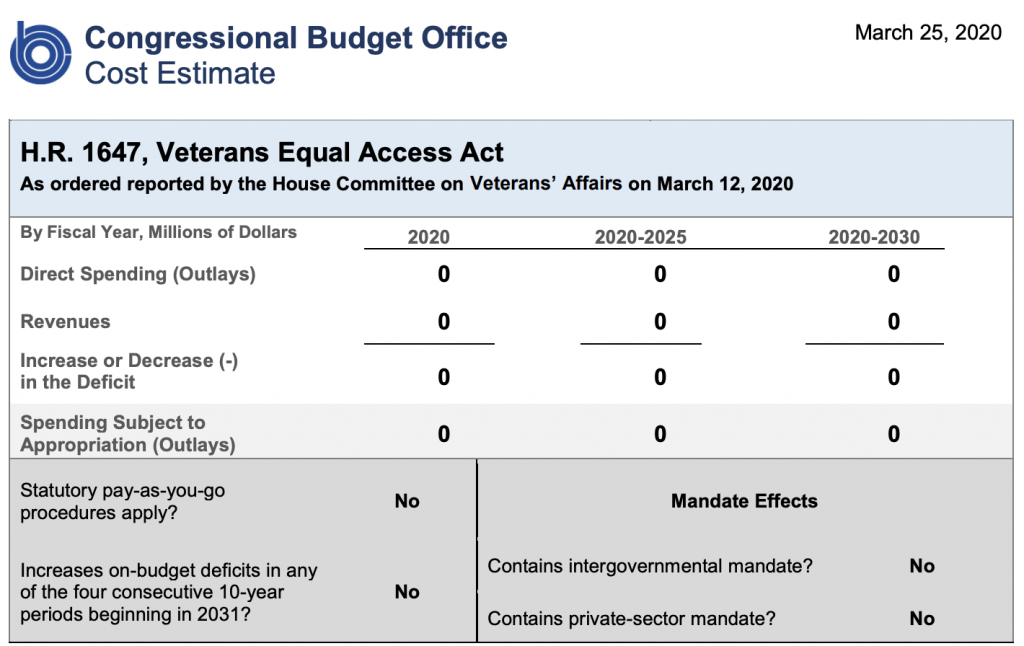 “Additionally, VA encourages physicians to discuss marijuana use with patients who participate in state-approved marijuana programs,” the agency said. “Thus, CBO estimates that providing information on medical marijuana would not increase VA’s costs to provide health care to veterans.”

Another bill the committee approved at the same hearing earlier this month would require VA to conduct clinical trials exploring the therapeutic potential of cannabis in the treatment of conditions that commonly afflict veterans such as chronic pain and post-traumatic stress disorder.

That legislation would presumably involve some additional costs to VA, though CBO has yet to score it.

It’s not clear when the full House will get to vote on either bill, but advocates expect it to pass when it arrives on the floor. Similar provisions in annual spending bills have cleared both the House and Senate in years past but have never been enacted into law.

That doesn’t mean the change is without resistance, however, as VA officials testified on a wide range of marijuana-related proposals—including the two measures that cleared the committee this month—last year and voiced opposition to each of them.

For the medical cannabis recommendations legislation, VA said it was advised by the Drug Enforcement Administration that its doctors could be held liable for violating federal law by providing a means for veterans to obtain a controlled substance, a contention that advocates dispute. The department also characterized the marijuana studies bill as excessively ambitious.