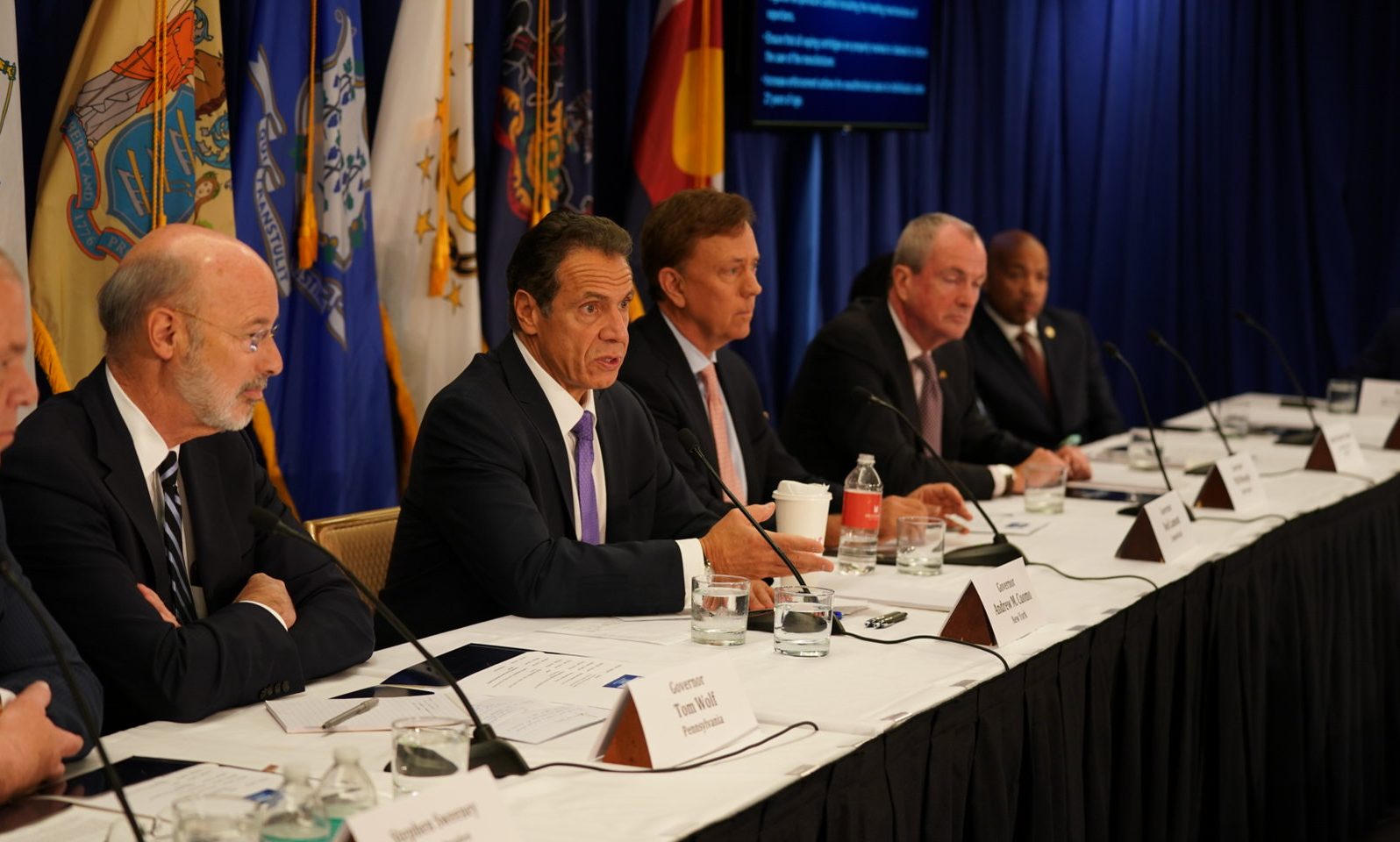 A group of governors representing states across the Northeast convened on Thursday for a marijuana summit at which they agreed to basic principles for legal cannabis programs they plan to pursue in 2020.

“This is a very important topic,” Cuomo said in his opening statement. “It is probably one of the most challenging issues that I know I’ve had to address in the state of New York. It is complicated, it is controversial and it is consequential. That is a very difficult and challenging combination.”

A big welcome to @GovNedLamont, @GovMurphy, and @GovernorTomWolf​ who are joining me for the Regional Cannabis and Vaping Summit.

Great that leaders from RI, CO, and Mass. are here also.

Can't wait for what will be a very meaningful policy discussion.

“It’s consequential because if you do not do it right, you can do harm, and the whole purpose here is to do good,” he said.

The summit is being broken up into five sessions: on vaping and related issues, market regulation and social justice issues, public health consequences of cannabis, public safety issues and a “best practices” panel led by Colorado representatives.

“The point is, this is a challenge for all of us,” Cuomo said. “There is a desire to do this. I believe the people of this state and our surrounding states have a desire to do it. But the old expression the devil is in the details, how you do this makes all the difference. And as I said it can be a positive if done right, it can be a negative if it is not done correctly.”

Lamont, who also talked cannabis with Cuomo during a fishing trip in August and again during a meeting last month, said the current “patchwork quilt” approach that states have taken to marijuana regulations is “unconscionable” and emphasized the need for regional coordination.

Today I'll be meeting with @NYGovCuomo of #NY, @GovMurphy of #NJ, @GovernorTomWolf of #PA, and officials representing #RI and #MA to discuss the emerging health concerns of vaping, as well as opportunities to legalize and standardize recreational marijuana on a regional basis. pic.twitter.com/P9bkAjZWGV

“This makes sense: sitting down, working together, working together with New Jersey, working with Pennsylvania and our other neighbors to make sure that what we do, we do it on a standardized basis, we do it on a well-regulated basis with health and safety paramount,” the governor said. “I think we’re much stronger when we work together and that’s what this meeting is all about.”

The governors agreed to determine an ideal tax scheme for marijuana and impose certain limitations on licensing to “ensure a fair and competitive market.” The taxes will also be designed to prevent an increase in consumption.

Importantly, the officials said their systems will include “social equity initiatives to ensure industry access to those who have been disproportionately impacted by the prohibition of cannabis” and to prioritize “small and diverse businesses’ participation in the cannabis industry.”

In terms of public health, the governors were in consensus about imposing restrictions on modes of cannabis consumption and advertising. They said they will prohibit advertising that targets youth and create “strict penalties” for selling marijuana to those under 21. Public education campaigns will also be utilized “ to inform youth and the general public about the health and safety consequences of cannabis use.”

To ensure public safety, the governors said they agreed to have uniform standards for law enforcement trained as drug recognition experts to identify impaired driving. Methods will be developed to target the illicit market and identify “bad actors” in the industry.

Congress should pass a bill allowing banks to service marijuana businesses, they said.

“So long as it remains difficult to open and maintain bank accounts, the state-legal marijuana industry will largely rely on cash to conduct business and operate, which results in public safety issues and creates unique burdens for legal marijuana businesses,” the core principles document says.

The officials also agreed to a set of regulations for vaping products, including a ban or strict regulations on flavored cartridges, preventing the use of adulterants, imposing labeling requirements and increasing enforcement against retailers that sell vaping products to those under 21.

All told, the agreed-upon policies are likely to appeal to reform advocates, as nothing especially controversial made it into the list of principles. There were some concerns that a ban on home cultivation or smokable marijuana products would be included, as Cuomo recently hinted he might push for the latter policy.

“Cooperating as a coalition of states on these issues is the best path forward—as we not only share borders, but we share economic interests, public health priorities, and a joint understanding that the more states that work together on these kinds of issues, the better the policy results will be for our residents,” Lamont said.

Today's summit with @NYGovCuomo @GovMurphy, @GovernorTomWolf and officials from #RI & #MA provided for an opportunity to align our policies on marijuana legalization and vaping.

When states work together collaboratively, carefully and thoughtfully we can create better policies. pic.twitter.com/wzfUXqbxco

Wolf noted that his administration had recently concluded a statewide listening tour to hear from residents about proposals to legalize cannabis and said that based on that input, “we need to bring this into the open.”

I’m in NYC with @NYGovCuomo, @GovNedLamont, @GovMurphy, and other state leaders to talk about vaping and cannabis.

Thankful for the opportunity to have this meaningful policy discussion so we can better serve our citizens and keep them safe.

“We need regulation, we need to make sure we’re protecting public health, public safety. But that’s regulation, not prohibition,” he said. “It’s also really important that we work together as a region to make sure that we’re on the same page.”

Truly honored to attend with @GovernorTomWolf to discuss regional strategies on cannabis.

Very grateful to @andrewcuomo for convening and hosting such an informative, engaging gathering of experts and stakeholders. https://t.co/5NYDtrbjgb

Murphy emphasized that “doing things in an intelligent, coordinated, harmonious way is good for the entirety of not just our states but our residents.” He added that there are two main issues the leaders must tackle: combating the spike in vaping-related injuries and promoting social justice.

Our states are stronger when we work together. Join me live at the Regional Cannabis and Vaping Policy Summit with @NYGovCuomo, @GovernorTomWolf, and @GovNedLamont as we work to align our policies on adult-use marijuana legalization and vaping.https://t.co/aWlGehcNWA

“We’ve got a shocking gap between persons incarcerated in our system along racial lines, and it’s almost entirely due to low-end marijuana offenses,” he said. “Putting aside all of the other factors that come into the cannabis discussion, the social justice, at least in New Jersey, screams out at us and it’s why we’ve come to the table with such passion.”

Proud to join @NYGovCuomo, @GovernorTomWolf, and @GovNedLamont for the Regional Cannabis and Vaping Policy Summit. Working together, we can collaborate on vaping regulations while forging a comprehensive, justice-oriented vision for adult-use marijuana legalization in our region. pic.twitter.com/zD5qJWuFuq

It was great participating in the Cannabis & Vaping Regulation Summit w/ leaders from across the northeast – if we want to regulate vaping or cannabis effectively, we need to take a regional approach! @NYGovCuomo @GovernorTomWolf @GovRaimondo @CharlieBakerMA @NedLamont @GovMurphy pic.twitter.com/xzqWOdxvjZ

“In the absence of federal leadership, Governors are coming together and taking a regional approach to vaping and cannabis regulations,” Rhode Island Gov. Gina Raimondo (D), who did not attend the summit herself, said in a press release. “The principles we’ve agreed to today will allow us to better coordinate our efforts as we address some of the most challenging issues facing our states. Through this partnership, we will work together to protect families from the dangers posed by the illicit cannabis market and vaping.”

Following the opening statements, panels led by experts were invited to testify about their respective cannabis and vaping-related topics for five minutes and then answer questions. While the governors’ opening statements were livestreamed online, the discussion sessions were closed to press.

The list of principles that came out of the summit was released Thursday afternoon.

The governors each represent states where lawmakers have unsuccessfully attempted to legalize marijuana. Efforts stalled in New York following months of negotiation between Cuomo and the legislature, with disagreements centering on issues such as tax rates and how revenue would be earmarked.

In New Jersey, bids to legalize cannabis for adult use failed, with lawmakers suggesting they might advance the issue through a referendum for voters to decide on next year.

Pennsylvania lawmakers discussed a legalization bill during a joint Senate and House Democratic Policy Committee in April, but that did not materialize either. However, following the listening tour and with the backing of Wolf, a comprehensive piece of legalization legislation that was introduced on Tuesday is believed to stand a better chance.

This story has been updated to include additional comments and information about legalization principles the governors agreed to.