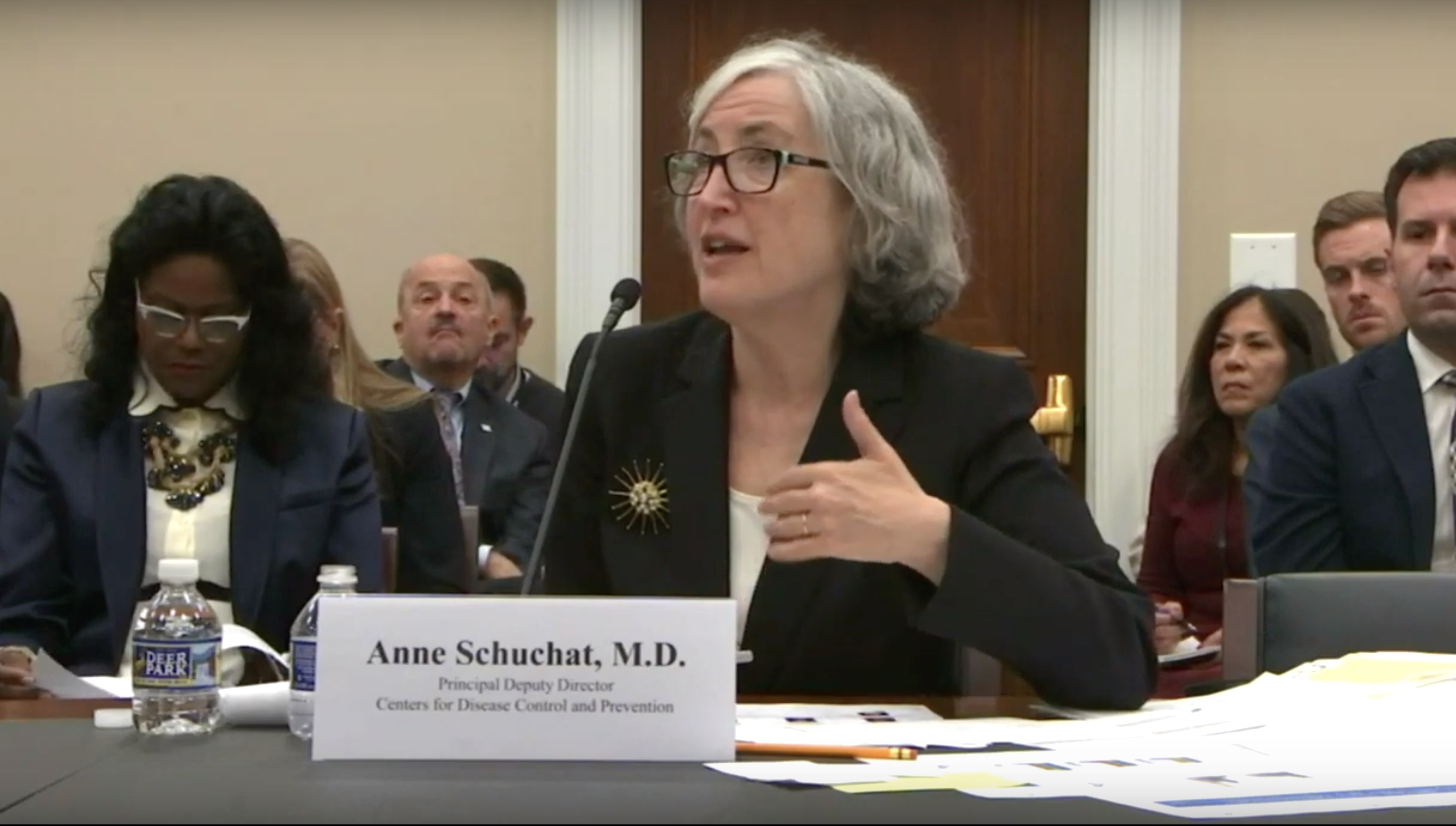 A top official with the Centers for Disease Control and Prevention (CDC) emphasized on Wednesday that the majority of vaping-related injuries associated with THC-containing cartridges are being traced back to the illicit market, rather than state-legal cannabis shops.

During a hearing before the House Appropriations Labor, Health and Human Services, Education, and Related Agencies Subcommittee, Rep. Andy Harris (R-MD) argued that the spike in vaping issues throughout the country demonstrates that states prematurely implemented legal marijuana markets, putting consumers and young people in particular at risk.

But that’s not quite an accurate reflection of what preliminary data has shown, CDC Principal Deputy Director Anne Schuchat said in reply.

“Is the feeling that the states have gone ahead basically approving these THC-containing substances through regulation when they were basically unhealthy?” Harris asked. “They basically didn’t have the scientific information about whether this was safe, but they were approving these compounds—is that right?”

“I mean they were legally sold, is that what you’re saying? They were legally sold, they ended up hurting our children and these are when the states claim, ‘don’t worry, it’s all safe, we’ll regulate it,’’” he continued. “We don’t have the knowledge to know what’s safe and what isn’t, do we?”

While there are knowledge gaps, Schuchat explained that legal dispensaries don’t appear to be the hub of contaminated products.

“Let me clarify, for the lung injury outbreak, while the vast majority report using THC-containing pre-filled cartridges, they report getting them from informal sources or off the street, not necessarily from licensed dispensaries,” Schuchat said. “So far that’s what we found, but we’re still gathering data.”

Harris also asked the official whether the roughly eight percent of adolescents who report using THC-containing vaping products are using them for medical or recreational purposes, seemingly assuming that those individuals obtained them from state-legal sources and not the illicit market.

“We probably ought to study the use of marijuana a little bit more before we go willy-nilly and make it available recreationally throughout the country,” Harris said. “There’s a big discussion about medical versus recreational, are these eight or nine percent, are they using it because they have the usual indications that people claim for medical marijuana or are they just using it recreationally? What’s your feeling, doc?”

“We don’t have data. There’s a lot of anecdote,” Schuchat replied. “But one thing I would say is there’s a lot of debate out there about whether legal status makes things better or worse in the states because some of our concerns right now are about the counterfeit and black market—whether the substances that are in products that are completely unregulated by the states are riskier than the products that are regulated by the states.”

“I don’t think we have good data either way, but that’s a discussion that’s happening,” she said.

Harris followed up by asking whether states are regulating THC cartridges, and the CDC official said that’s the case in states where such products are legal but that each state “has to set up their own plan on how they’re going to do the regulation.”

Former Food and Drug Administration Commissioner Scott Gottlieb has also discussed regulatory limitations associated with having a state-by-state approach and argued that states are ill-equipped when it comes to enforcement. Gottlieb said last week that the federal government should be involved in regulating state markets when it comes to policies on THC potency and permitted methods of consumption, for example, though he argued that vaping cannabis should be banned outright.

One regulation that’s enforced across the board in adult-use states is a 21 and older age requirement to purchase cannabis products. And experts believe that the reason most lung injuries and deaths are being linked to “informal sources” is because some illicit producers are adding thickening agents to the THC oil that are dangerous to inhale, which is something that would be prohibited under quality control standards imposed in legal marijuana markets.

There have been rare instances where individuals who experienced lung problems reported purchasing vaping products from licensed dispensary, including a case in Oregon that led to a man’s death, but regulators have stressed that it remains unclear whether those legally obtained products are at fault.

“It doesn’t necessarily mean the individual got sick from products that they had purchased at these dispensaries, we just know that the individual shopped at a couple of dispensaries prior to getting ill,” Jonathan Modie, spokesperson for the Oregon Health Authority, told Willamette Week. “We’re still waiting to get samples of the products and then we send that off for testing.”

CDC released a report last week that recommended people abstain from using vaporizer products that contain THC, noting the prevalence of cases where the compound was involved. The agency added that the “possibility that nicotine-containing products play a role in this outbreak cannot be excluded” and therefore it “continues to recommend that persons consider refraining from using e-cigarette, or vaping, products that contain nicotine.”

Some observers neglected to acknowledge that nuance, however, with prohibitionist group Smart Approaches to Marijuana and Politico nonetheless reporting that CDC advised against the use of cannabis vaping products exclusively.

MASSIVE: The CDC has narrowed its warning on vaping, urging Americans to only avoid vaping THC products.

The CDC is now exclusively warning people not to vape THC amid the outbreak of related lung illnesses. Previous guidance advised against the use of all e-cigarette products https://t.co/Y5qVfMUNep

“We don’t have a marijuana funding line through your appropriations,” Schuchat said. “We have broader lines that we use to support the core work that we do, but we’re not funded to do research on marijuana.”

Herrera Beutler (R-WA) said she’s “ready to help step up and get you what you need,” but that “you’re the doctors and the researchers” and the committee needs CDC’s help in order to best steer resources.