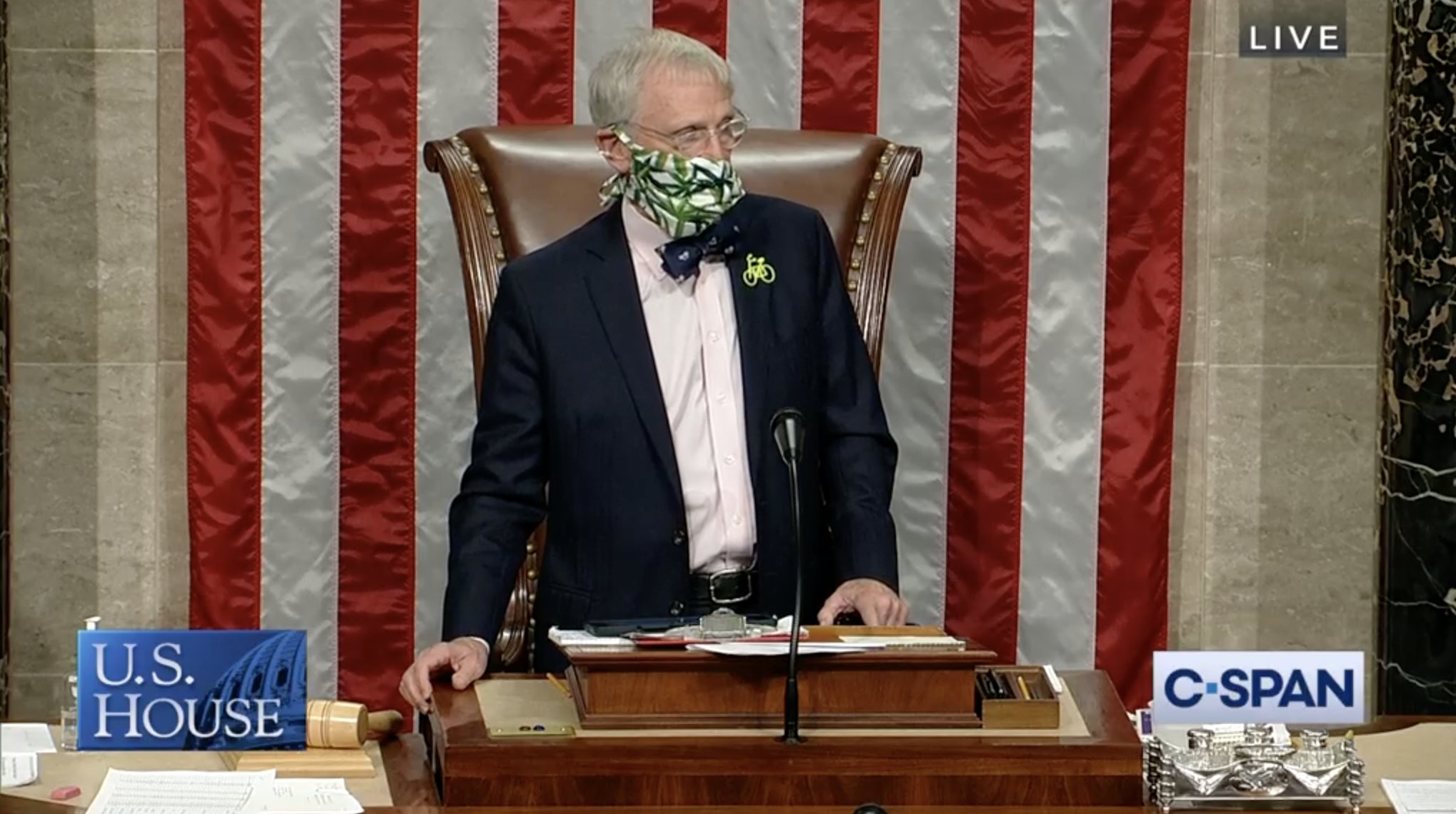 A Republican member of the U.S. House of Representatives has filed a formal complaint over a Democratic colleague’s decision to wear a face mask with images of marijuana leaves on it during a debate on a legalization bill, saying the garment amounted to an endorsement of recreational drug use and diminished “the seriousness and decorum of the House floor.”

“Legality aside, it’s unbecoming for a House member to wear clothing that promotes the use of any recreational drugs on the House floor,’ Rep. Jim Banks (R-IN) wrote in a letter to House Speaker Nancy Pelosi (D-CA). “It’s a clear violation of the House’s Code of Conduct which prohibits all behavior that does not, ‘reflect creditably on the House.'”

Banks—who argued that the speaker has “allowed facemasks to be worn on the House floor that wouldn’t be allowed in a High School assembly hall”—was calling out Rep. Earl Blumenauer (D-OR), a longtime legalization advocate who on Thursday wore a mask covered in a cannabis-leaf print during a procedural debate on the Marijuana Opportunity, Reinvestment and Expungement (MORE) Act, which would federally legalize marijuana.

I've been waiting for this moment for 47 years. To preside during this debate is a true honor. #EndCannabisProhibition pic.twitter.com/6lqiV09Dfn

After Thursday’s debate on the rule for considering the cannabis legislation, the House passed the bill itself on Friday on a 228–164 vote that fell mostly along party lines. Banks himself voted against the legislation, which faces an uphill battle in the GOP-controlled Senate.

“Whether or not members’ dress is appropriate is decided by the Speaker,” Banks acknowledged in his letter to Pelosi, first reported by the Daily Caller, but he added that the “best solution is likely a blanket ban on stylized facemasks.”

Blumenauer hit back at Banks’s complaint in a statement to Marijuana Moment.

“We’ve got a blatantly discriminatory drug policy. We’ve got a pandemic, during which Republicans have done nothing to help families and small businesses that are desperate,” he said. “And they’re worried about a pattern on a mask? Get a grip.”

Separately in the letter to Pelosi, Banks observed that Rep. Henry Cuellar (D-TX), the House Speaker pro tempore, wore a face mask “that appeared to display his campaign logo while sitting in the Speaker’s chair.”

While House rules prohibit wearing campaign materials on the chamber floor—part of a prohibition on the use of official government resources for campaign purposes—the argument that Blumenauer’s mask was off limits is a farther reach. The mask didn’t specifically reference the legalization bill, nor does it necessarily depict illegal drugs. The only difference between marijuana and its virtually identical cannabis cousin hemp, which Congress federally legalized in 2018, is the amount of THC in the plant.

Sen. Mitch McConnell (R-KY) famously signed the hemp legalization bill with a pen made from cannabis. A year later, he proudly showed off the hemp pen in a video celebrating the newly legal industry.

The marijuana mask isn’t the only sartorial statement Blumenauer has made in recent years. The bicycle- and pedestrian-friendly lawmaker, who co-chairs the informal Congressional Bike Caucus, has also worn an iconic bicycle lapel pin on the House floor for years—so far without being sanctioned for advocacy.

If the MORE Act becomes law, it would remove marijuana from the federal Controlled Substances Act and expunge past convictions, as well as use revenue from a new federal cannabis tax to fund programs to repair the harms of the war on drugs. According to a report by the nonpartisan Congressional Budget Office last week, the proposals would bring in $13.7 billion in net revenue to the federal government over the next decade and would save the Bureau of Prisons roughly $1 billion on incarceration costs.

Despite strong support in the Democrat-controlled House, however, the legislation is expected not to make it through the Senate, where Republicans still hold a majority, this year.

This piece has been updated to include comment from Blumenauer.

Conservative Groups Call For Marijuana Legalization Ahead Of House Vote