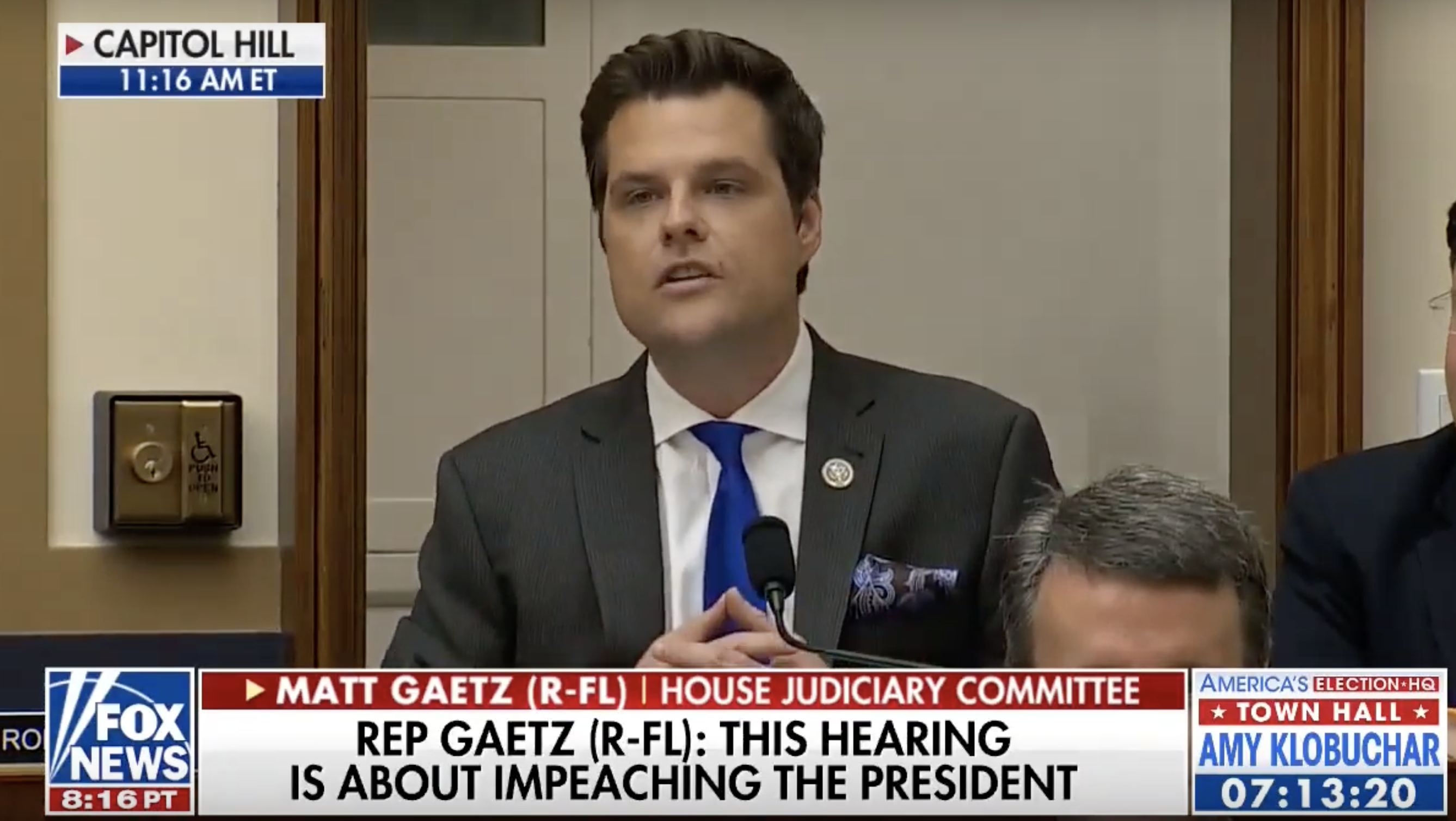 Rep. Matt Gaetz (R-FL) said on Wednesday that his Democratic colleagues have “really good ideas” such as marijuana reform that are being buried due to the party’s intensive focus on investigating allegations that President Donald Trump obstructed justice.

The congressman made the remarks at a House Judiciary Committee hearing that concerned Attorney General William Barr’s refusal to comply with a subpoena to release the full report from Special Council Robert Mueller on Russian interference in the 2016 election.

Gaetz argued that the hearing wasn’t actually about the report or the attorney general—it was about impeaching the president. But if House Democrats were willing to move beyond the issue, he said, they’d be able to pursue bipartisan legislation such as proposals to expand research into medical cannabis.

“There are some really good ideas that my Democratic colleagues have once they get to acceptance on the no Russia collusion thing,” he said. He pointed to the sentencing reform bill, the First Step Act, that was signed into law last year as an example of criminal justice legislation that Congress should build on.

“And by the way, I’ve got a bunch of my friends on the other side of the aisle lowkey wish that their actual bills that would impact the lives of Americans would get heard instead of this garbage,” he added before yielding his time.

The comments come one day after Gaetz criticized House Democrats on the Veterans’ Affairs Committee for pulling votes on two cannabis bills from a markup that was scheduled for Wednesday. The chair of the committee instead plans to hold a marijuana-focused hearing at a later point to discuss the legislation.

Gaetz and Swalwell were among thirty members of Congress who sent a letter to Barr and the head of the Drug Enforcement Administration earlier this week, urging the officials to approve additional manufacturers for research-grade cannabis.

The House Judiciary Committee, under Republican leadership last year, approved legislation that Gaetz filed that would force the Department of Justice to license more marijuana growers, but it died without receiving a floor vote.

The GOP congressman was also among the original cosponsors of the Strengthening the Tenth Amendment Through Entrusting States (STATES) Act, which would amend the Controlled Substances Act to protect states that have legalized marijuana from federal intervention.

Don Murphy, federal policies director for the Marijuana Policy Project, said that Gaetz is “correct” to highlight the need for cannabis reform action sooner rather than later.

“People who are sick or are having their lives ruined because of bad marijuana policy don’t need action ‘fairly soon.’ They need action now,” he told Marijuana Moment.