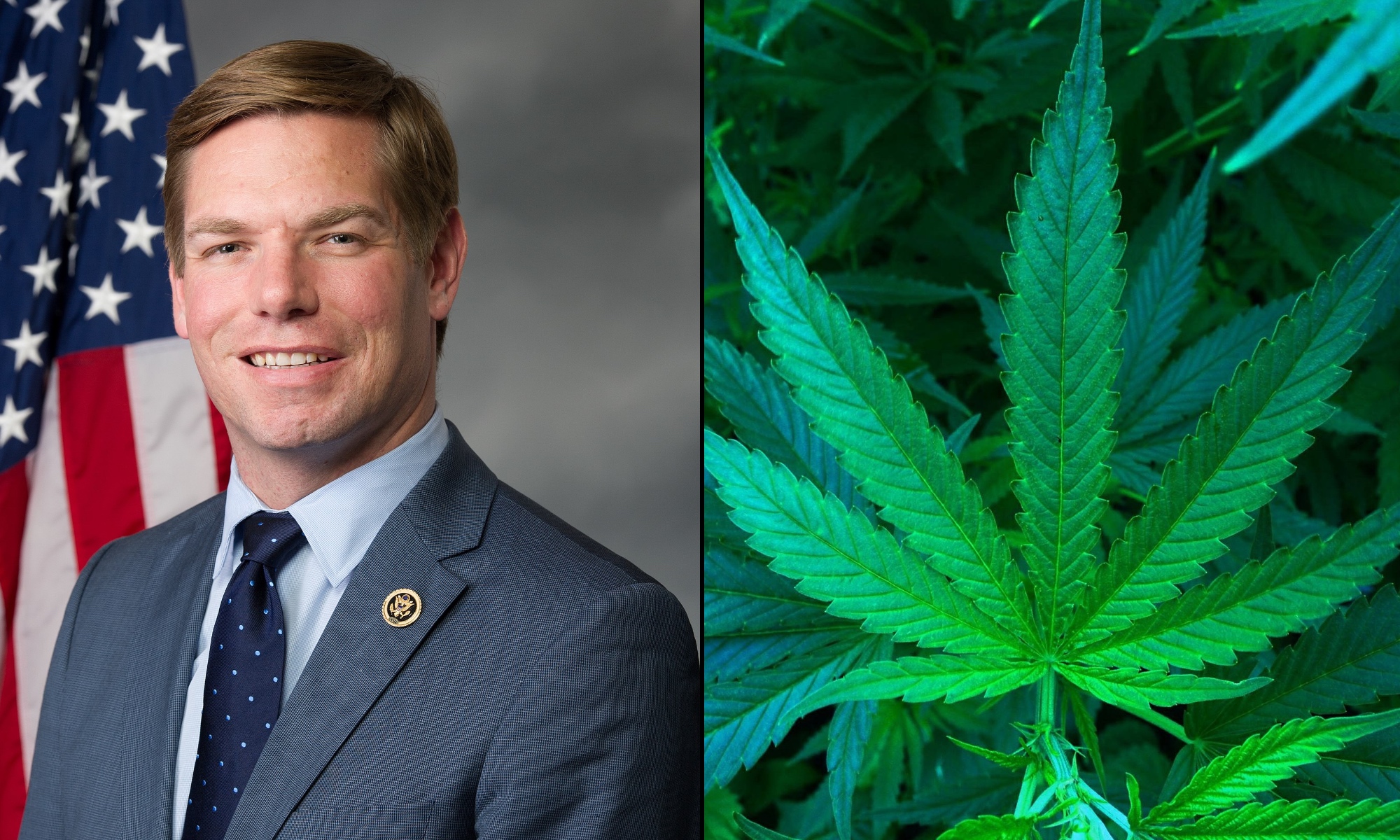 Rep. Eric Swalwell (D-CA) joined the ranks of 2020 Democratic presidential hopefuls on April 8 and later suspended his bid on July 8.

The congressman, a former prosecutor who sits on the House Judiciary Committee, endorsed California’s adult-use legalization measure prior to its passage in 2016 and has cosponsored numerous pieces of cannabis legislation on Capitol Hill, including bills to end federal marijuana prohibition. His record on the issue earned him an “A+” grade from NORML.

This piece was last updated on July 8, 2019 to include the candidate’s statements and policy actions on marijuana since joining the race.

While Swalwell has not been the lead sponsor of any cannabis bills, he’s put his name on several wide-ranging proposals as a cosponsor since joining Congress in 2013.

On several occasions, he signed on to legislation that would federally deschedule marijuana or otherwise shield state legalization laws from federal interference. He also cosponsored a more far-reaching bill to deschedule cannabis while also setting aside funding for expungements and to support women- and minority-owned marijuana businesses.

On a more incremental level, he supported legislative efforts to protect states that have legalized medical cannabis from federal intervention. He also signed on to a bill to let defendants in federal court cases introduce evidence of their state-legal medical cannabis activity as a defense.

Swalwell cosponsored bills to secure banking access for state-legal marijuana businesses, to allow the U.S. Department of Veterans Affairs (VA) to study medical cannabis for veterans, to impose an excise tax on marijuana sales, to exempt real property from civil asset forfeitures for medical cannabis activity in compliance with state law and to increase the number of federally authorized marijuana manufacturers for research purposes.

The congressman also backed legislation to legalize industrial hemp in the 114th and 115th Congress.

Besides his bill cosponsorships, Swalwell has also voted in favor of floor amendments to shield medical cannabis from federal enforcement in 2014 and 2015. He voted for similar amendments to extend that protection to adult-use and CBD-only states in 2015.

Other amendments he’s supported include ones that would allow doctors at the VA to recommend medical cannabis, others to prevent the Justice Department from using its resources to interfere with state-legal hemp markets and one to provide banking access to legitimate marijuana businesses.

The congressman was absent for 2019 floor votes on measures to protect all state marijuana laws from federal interference and remove roadblocks to research on Schedule I substances such as cannabis and psychedelic drugs.

In 2014, Swalwell signed a bipartisan letter to President Barack Obama imploring him to direct the attorney general to remove marijuana from Schedule I of the Controlled Substances Act. He made the same request, along with 13 other members of Congress, in a spearate 2016 letter to Obama. He also asked Obama to lift barriers to marijuana research in a 2016 letter and, in 2018, requested that the president select a DEA head who is willing to “set drug enforcement priorities that make sense within the evolving landscape of state marijuana laws.”

The congressman joined colleagues in a separate letter in 2015, urging House and Appropriations Committee leadership to support an amendment that would shift money from the Drug Enforcement Administration (DEA) marijuana eradication fund to three unrelated accounts.

He was also part of large coalitions that sent a letters to House leaders in 2017 and 2018 asking them to maintain protections from federal intervention for states that have legalized medical cannabis.

I'm supporting this bipartisan effort; @TheJusticeDept should not interfere with states such as California that have chosen to legalize marijuana. https://t.co/7hitl1oONR

“We fear that the elimination of the Obama Administration’s marijuana enforcement guidance will promote an inefficient use of limited taxpayer resources and subvert the will of voters who have clearly indicated a preference for legalized marijuana in their states,” the lawmakers wrote.

Finally, in October 2018, Swalwell and others sent a letter to Sessions and the then-acting administrator of the DEA, questioning how the Trump administration can pursue a “buy American” agenda while blocking the domestic production of marijuana for research purposes.

Why are we importing #cannabis from Canada for research while the @DEAHQ isn’t acting on more than two dozen U.S. cannabis manufacturer applications? @RepMattGaetz and I are leading a bipartisan effort to find out. #BuyAmerican pic.twitter.com/lvR2LYyigY

Swalwell praised Nevada’s marijuana legalization law during a campaign visit in May, saying the state is “doing a great job.”

“I want to have a country where it is legalized everywhere and patients can benefit as they are suffering from different diseases,” he said.

During a CNN town hall event in June, Swalwell spoke about his support for decriminalizing and rescheduling cannabis and expunging the records “of anyone who had a marijuana conviction in the past.”

He included his support for legalizing marijuana in a tweet criticizing the 1994 Crime Bill and calling for additional criminal justice reforms.

I was 13 when the 1994 Crime Bill was passed. Millions others affected by it weren’t even born. How about we stop living in the past and do something NOW about its effects?

The congressman hasn’t taken to social media to make his views on marijuana reform heard quite as often as other Democratic candidates have. But what he has said—which is mostly confined to letters covered above—has made his stance on cannabis clear.

When he voted in favor of an amendment to protect medical marijuana states from federal intervention, Swalwell wrote on Facebook that, as a former prosecutor, “I did not take this vote on medical marijuana lightly.”

“But as someone who has seen first-hand how it has helped family members struggling with chronic illness and disease, I can’t allow them or any patient to live in uncertainty,” he wrote. “I voted to stop the DEA from enforcing federal marijuana laws against states that have passed medicinal marijuana laws.”

He also spoke about his relationship to family members who use medical cannabis when he was asked about his support for California’s adult-use legalization measure in 2016.

“I’m probably the most unlikely person to support it. I was a prosecutor for seven years,” he said. “For me, I just look at where we put our resources—and I have family members who use medicinal marijuana for a medical issue they have and it certainly helps. When I look at where we put our resources, the fact that we haven’t studied it enough to know if can help more people, why not decriminalize it? Why not better control it and pass Proposition 64?”

“Scientists and health care professionals believe that keeping marijuana illegal is unjustified,” he told The Sacramento Bee. “Prosecution of marijuana violations clog our already overburdened courts and cost hundreds of millions of dollars annually to enforce.”

During a congressional hearing in 2018, Swalwell pressed the head of the DEA about what’s being done to combat youth substance misuse, which led the official to say that he doesn’t believe that cannabis is a gateway drug.

The congressman also told Politico in 2017 that he “was disappointed that the [Obama] administration didn’t seize the opportunity to end” federal marijuana prohibition.

.@RepSwalwell "was disappointed that the last administration didn't seize the opportunity to end" prohibition of marijuana #PlaybookExchange

Speaking about a piece of marijuana legislation that he cosponsored, Swalwell said the bill “gives states more autonomy—and gets federal authorities off the back of states like California which already have made a choice to legalize—while giving landlords and federally-insured banks much-needed clarity that they’re not violating the law by getting involved with cannabis businesses.”

“It’s time that we sort this out once and for all,” he said.

Swalwell said in 2016 that he’s “never tried the stuff,” which “probably makes me less qualified” to endorse California’s legalization measure.

“I was such a nerd in high school,” he said, “and playing college sports you get tested all the time.”

That said, he has seen marijuana’s therapeutic benefits up close. In a video he posted on Twitter, Swalwell said he is “a family member to someone who uses cannabis for their medical condition.”

Where do I stand on the legalization of marijuana?

Tune in to our #CNNTownHall tomorrow at 8pm ET/ 5PM PT to hear more! pic.twitter.com/z6GnrNAOrY

Marijuana Under A Swalwell Presidency

While marijuana reform might not be at the top of Swalwell’s agenda if he’s elected as compared to other candidates who have focused more intensely on the issue, he’s repeatedly indicated that he supports efforts to broadly end prohibition and allow states to set their own cannabis policies.

Additionally, his support for moves to increase research into medical cannabis, restrict the Justice Department from enforcing prohibition and lifting barriers to financial institutions for cannabis businesses means his platform is aligned with ongoing congressional efforts to change federal marijuana laws.