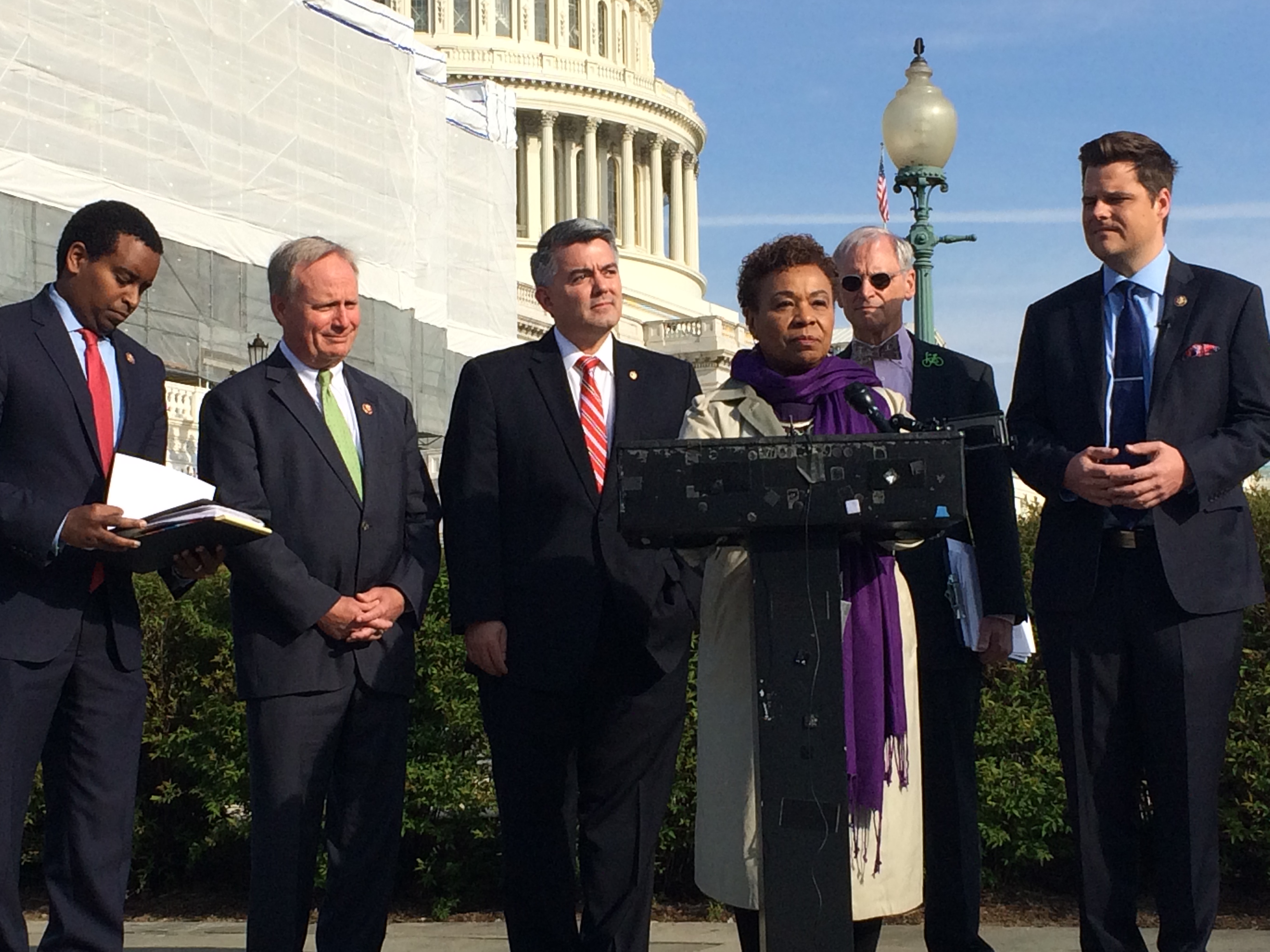 Will 2019 be the year that Congress blocks the federal government from enforcing prohibition in legal marijuana states? A bipartisan team of lawmakers in the House and Senate are optimistic that it will, and they introduced legislation on Thursday to accomplish that goal.

Watch the press conference below:

The legislation would amend the Controlled Substances Act to protect people complying with state legal cannabis laws from federal intervention, and the sponsors are hoping that the bipartisan and bicameral nature of the bill will advance it through the 116th Congress.

President Trump voiced support for a previous version of the legislation last year.

“I’ve been working on this for four decades. I could not be more excited,” Blumenauer told Marijuana Moment in a phone interview.

While other legislation under consideration such as bills to secure banking access for cannabis businesses or study the benefits of marijuana for veterans are “incremental steps that are going to make a huge difference,” the STATES Act is “a landmark,” he said.

46 states have some legalized some form of cannabis. Yet far too many people still face federal prosecution and roadblocks in their daily lives — especially people of color. I’m proud to support the #STATESAct to stop federal interference in legal cannabis enterprises. pic.twitter.com/lhjTHB1Sft

The congressman said it will take some time before the bill gets a full House vote, however. Rep. Jim McGovern (D-MA) recently suggested that the legislation would advance within “weeks,” but Blumenauer said it will “be a battle to get floor time” and he stressed the importance of ensuring that legislators get the chance to voice their concerns and get the answers they need before putting it before the full chamber.

“We want to raise the comfort level that people have. We want to do it right,” he said. “There’s no reason that we have to make people feel like they’re crowded or rushed.”

Today, I introduced the STATES Act w/ @RepDaveJoyce @SenCoryGardner @SenWarren. Our outdated cannabis laws have ruined lives, devastated communities and wasted resources. This is the next logical step for Congress to catch up w/ the rest of America & fix a badly broken system. pic.twitter.com/YUW3iqwu25

Asked whether he’d had conversations with House Speaker Nancy Pelosi (D-CA) about moving cannabis bills forward this Congress, Blumenauer said there’s been consistent communication between their offices and that the speaker is “very sympathetic” to the issue and “understands the necessity of reform.”

Today, I joined my colleagues to introduce bipartisan legislation that will ensure the cannabis industry in Colorado is not held back by the federal governments delay in legalization, by ensuring they can access banks & loans & that the threat of federal prosecution is removed. pic.twitter.com/yQlBjtQN3b

People of good faith – both in the industry and outside of it – are at risk of being a federal felon despite complying with state law. And the cash on the streets is a big public safety and law enforcement concern.

“Our federal marijuana laws are outdated and pose a threat to our public health and safety. Marijuana should be legalized, and we must reverse the harm of these failed policies by wiping clean the records of those unjustly jailed for minor marijuana crimes,” Warren said in a press release, although the STATES Act does not contain provisions addressing past cannabis convictions.

“Congress should take immediate action on these important issues by passing the bipartisan STATES Act and protecting states, territories, and tribal nations as they implement their own marijuana laws without federal interference,” she added.

“In 2012, Coloradans legalized marijuana at the ballot box and the state created an apparatus to regulate the legal marijuana industry. But because of the one-size-fits-all federal prohibition, state decisions like this put Colorado and other states at odds with the federal government,” Gardner said. “The federal government is closing its eyes and plugging its ears while 47 states have acted. The bipartisan STATES Act fixes this problem once and for all by taking a states’ rights approach to the legal marijuana question. The bipartisan, commonsense bill ensures the federal government will respect the will of the voters – whether that is legalization or prohibition – and not interfere in any states’ legal marijuana industry.”

For the most part, the latest versions of the legislation are identical to the previous Congress’s bills, though there are two exceptions. Previously, there was a provision exempting hemp from the definition of marijuana, but that was removed—presumably because it is no longer needed in light of the passage of the 2018 Farm Bill, which federally legalized the crop.

The bigger change is that the new version contains a section that requires the Government Accountability Office to conduct a study on the “effects of marihuana legalization on traffic safety.”

Among other data points, the office would be directed to collect info on “traffic crashes, fatalities, and injuries in States that have legalized marihuana use, including whether States are able to accurately evaluate marihuana impairment in those incidents.” A report on those effects would be due one year after the law is enacted.

“This bipartisan legislation signals the eventual end of marijuana prohibition at the federal level,” Steve Hawkins, executive director of the Marijuana Policy Project, said in a press release. “It reflects the position held by a strong majority of Americans that states should be able to develop their own cannabis policies without interference from the federal government.”

“It also reflects the position President Trump took on marijuana policy throughout his campaign, and we are hopeful that he will have the opportunity to sign it into law,” Hawkins said. “While we look forward to the day when Congress is ready to enact more comprehensive reform, we fully embrace the states’ rights approach proposed by this bill.”

“The STATES Act is being reintroduced at a key moment when bipartisan support for cannabis policy reform is at historic levels in both chambers of Congress and among the general public,” said Aaron Smith, the group’s executive director. “Regulating cannabis is working well in the states that have enacted more sensible policies, and legitimate businesses are creating jobs and generating revenue while helping to replace the illicit market. Those businesses shouldn’t have to worry about being treated like criminals by the federal government and deserve clarity that is set in law as opposed to the whims of federal prosecutors.”

Read the text of the newly filed STATES Act below:

States Act by on Scribd