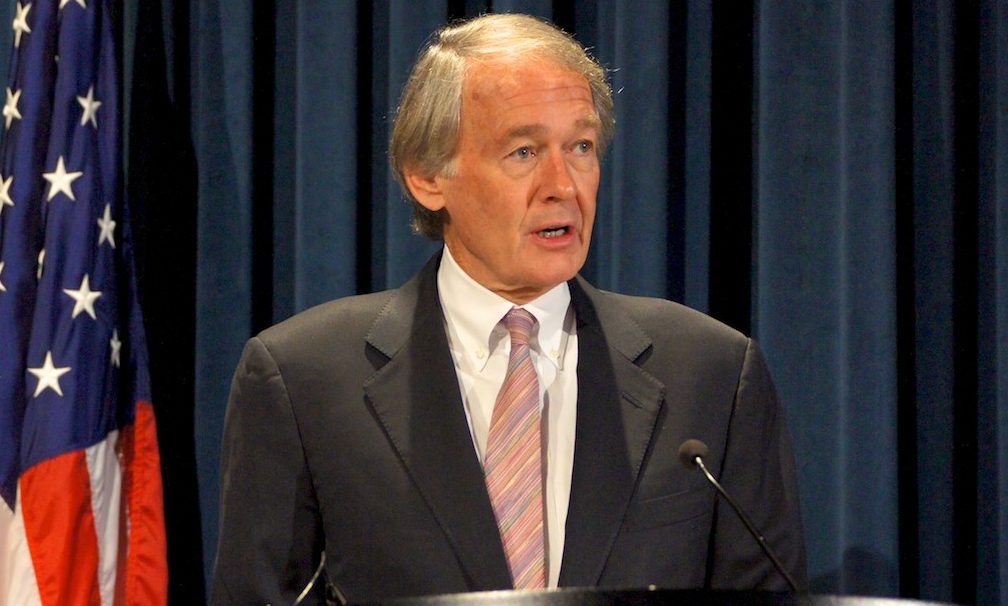 Sen. Ed Markey (D-MA) signed onto three pieces of marijuana legalization legislation on Thursday—just days after Rep. Joe Kennedy (D-MA) announced that he will campaign to unseat the senator next year.

Though it’s not clear if the primary challenge from a fellow Democrat directly inspired the back-to-back-to-back cannabis cosponsorships, it does signal an abrupt evolution for Markey, who has previously declined to endorse broad marijuana reform.

Throughout his more than 40 years serving in Congress, Markey had only cosponsored legislation to protect banks that service cannabis businesses, prevent federal interference in state medical marijuana programs and require the U.S. Department of Veterans Affairs to study the benefits of cannabis for veterans.

In that respect, descheduling marijuana entirely is a significant leap. Yet in one day, the senator cosponsored the Marijuana Opportunity Reinvestment and Expungement (MORE) Act, Marijuana Freedom and Opportunity Act and Marijuana Justice Act—all of which seek to end federal prohibition and address issues of social equity for communities disproportionately harmed by the war on drugs.

Given the popularity of cannabis reform, especially among Democratic voters, it stands to reason that the slew of cosponsorships could be connected to Kennedy’s recently announced challenge. While the much younger congressman had long stood opposed to marijuana reform, he announced last year that he’d changed his position and now supports legalization.

But Kennedy hasn’t gone so far as to put his name on any legalization legislation yet. He’s only signed on to bills that would offer marijuana banking protections, require VA research into cannabis and direct federal agencies to study the impact of state-level legalization.

When it comes to House floor amendments, Markey consistently voted for measures to shield state medical cannabis programs from federal interference. Kennedy at first voted against proposals along those lines but as part of his broader evolution on legalization this year supported an amendment to block the Department of Justice from intervening in the implementation of any state marijuana law.

Kennedy campaigned against the marijuana legalization measure that Massachusetts voters approved in 2016, while Markey doesn’t appear to have taken a public position on it.

Now, with the new bill cosponsorships, Markey can say that, unlike his opponent, he’s more than talk when it comes to proactively supporting legalization measures.

Marijuana Moment reached out to the senator’s office for comment, but a representative was not immediately available.

Jumping on the marijuana reform train in the heat of a congressional primary isn’t without precedent. For 17 years, Sen. Tom Carper (D-DE) hadn’t cosponsored any cannabis bills—until last year, when he was facing a tough primary against a progressive challenger who endorsed legalization. Suddenly, Carper’s name appeared on a list of cosponsorships for a bill to federally deschedule marijuana.

And when Sen. Dianne Feinstein (D-CA) cosponsored legislation to protect all state cannabis programs from federal intervention in 2018 despite her long history of opposing drug policy reform, advocates were cognizant of the fact that she was in the midst of a reelection campaign against pro-legalization California State Sen. Kevin de Leon (D).

Questions about the senator’s motives compounded when she reportedly pulled her name from a new version of the bill this year, once her reelection was secured.

Whether Markey’s newfound support for descheduling is an earnest reflection of an evolving perspective or a politically calculated move—or both—is yet to be seen. But in any case, it reflects a reality that’s increasingly hard for Democrats to ignore: for office seekers, marijuana reform is by and large an issue lawmakers need to pay attention to lest they end up on the wrong side of their base.