An amendment that would block the Justice Department from using funds to intervene in state and territory marijuana laws was debated on the House floor on Wednesday, with consideration of additional cannabis-related measures scheduled for later this week.

In a voice vote, the chamber approved the amendment—introduced by Reps. Earl Blumenauer (D-OR), Tom McClintock (R-CA) and Eleanor Holmes Norton (D-DC)—as well as a separate measure that extends the same protection to tribal lands where cannabis has been legalized.

While no lawmakers spoke in opposition to the tribal measure, and a roll call vote was not requested, the state and territory amendment still requires a recorded vote for final passage through the House. And the ultimate fates of both measures are unknown as the Senate prepares to consider companion legislation.

The last time a similar amendment to shield state marijuana laws from federal interference was up for consideration in 2015, it came just nine flipped votes short of passage on the House floor. But in the years since, the number of states with legal marijuana has more than doubled and now includes large states like California and Michigan that have vast constituencies who stand to benefit from the protection—with Illinois just a supportive governor’s signature away.

The Justice Department is already barred from interfering in state medical cannabis programs under a separate, more limited rider that’s been enacted each year since 2014.

Language of the broader amendment stipulates that federal law enforcement agencies cannot use funds to stop states and territories “from implementing their own laws that authorize the use, distribution, possession, or cultivation of marijuana.”

In a floor debate before the voice vote, Blumenauer pointed to shifting public opinion in favor of marijuana reform.

“This is what the American people have demanded, why it is now legal in 33 states,” he said. “It is supported by two-thirds of the American public, and 90 percent for medical marijuana. It’s time that we extend this protection to state-legal activities so they can drive and move forward.”

“We’re watching the growth of this industry, a multibillion-dollar industry. We’re watching state after state move forward,” he said. “Every one of us on the floor of the House who are here now represent areas that have taken action. We have had embedded in our legislation protections for medical marijuana. And this would simply extend that same protection to prevent the Department of Justice interfering with adult use. I strongly, strongly urge that we build on the legacy that we’ve had in the past, that we move this forward to allow the federal government to start catching up to where the rest of the states are.”

Norton, whose constituents in Washington, D.C. voted to approve marijuana legalization in 2014, decried Congress’s longtime interference in the city’s affairs.

Thanks to @repblumenauer for working with me to treat DC as a state in our amendment that prohibits @TheJusticeDept from interfering with state marijuana laws. The amendment is expected to pass the House tomorrow for the first time ever. pic.twitter.com/6sGGpb0sLz

“The District has insisted that Congress cease interfering with our desire to commercialize adult-use marijuana, and I appreciate that D.C. is included with the states that have the same goal,” she said of the amendment. “This amendment is a breakthrough.”

I'll soon speak on the House floor. My thanks to my good friend @repblumenauer for ensuring our amendment covers the District of Columbia in prohibiting the DOJ from using its funds to prevent jurisdictions from implementing their own medical and recreational marijuana laws.

“This proposal would prevent federal law enforcement from enforcing current law, from protecting public health and ensuring community safety,” he said. “Claims of benefits from smoked or ingested marijuana are anecdotal and generally outright fabrication. It is established by fact that such marijuana use has real health and real social harms.”

“This amendment that’s before us sends the wrong message about widely abused drugs in the United States,” he continued. “The amendment ignores the problems of abuse and sends the false message to youth that smoking marijuana is healthy.”

“If we were rescheduling drugs today, cannabis probably wouldn’t be scheduled at all. And what would be schedule I is tobacco, which is highly addictive and deadly,” he said.

While Blumenauer voiced confidence that the amendment would pass when it comes up for a roll call vote, expected on Thursday, that doesn’t necessarily mean that the body’s Democratic leadership is whipping for support.

Blumenauer told Marijuana Moment in a brief interview on Wednesday that the amendment is “being whipped by people who care about it,” referring to its sponsors and supporters.

“Each state is different and I think members have to vote their district, so I don’t know that leadership will necessarily whip it,” Rep. Linda Sanchez (D-CA) told Marijuana Moment. “I don’t know really if leadership should, because ultimately members are going to do what they think is best for their politics back home.”

Meanwhile, the amendment enjoys support from a coalition of fiscally conservative thought leaders, including Michelle Minton, senior fellow at the Competitive Enterprise Institute, and Grover Norquist, president of Americans for Tax Reform.

“Though we vary in our opinions on marijuana legalization, the signatories to this letter are in strong accord when it comes to the matter of the level of government to which this question should be left: with the states,” they wrote in a sign-on letter that was released on Wednesday.

Rep. Tom Cole (R-OK), who has historically voted against cannabis measures, told Marijuana Moment that “increasingly as voters go to the ballot box, you’re finding increasing support in [reform]” and that “there’s broadly a movement in that direction.”

At the same time, anti-legalization group Smart Approaches To Marijuana circulated a one-pager on the Hill on Wednesday, claiming that the amendment would fuel the opioid epidemic. 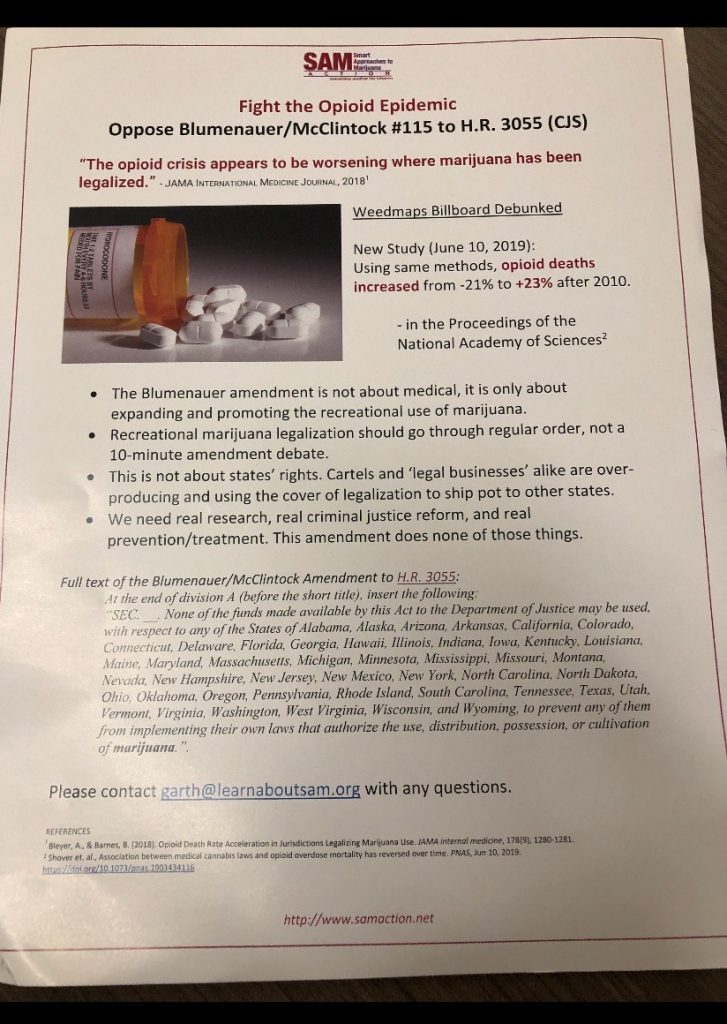 Blumenauer’s separate measure would make it so the Justice Department couldn’t use its resources to block Indian tribes “from enacting or implementing tribal laws that authorize the use, distribution, possession, or cultivation of marijuana.” Rep. Deb Haaland (D-NM), one of the first Native American women ever elected to Congress, cosponsored the amendment.

“Tribes have an interest in being able to conduct activities that deal with cannabis,” Blumenauer said on the floor. “It is a multibillion-dollar growth industry. It provides opportunities for health, economic development, recreational activities. The states have been granted a certain amount of latitude moving into this space, but the tribes have been denied.”

Today, the first ever amendment to protect tribal cannabis programs passed the House without opposition. While I continue to work with @RepDebHaaland on our larger movement to legalize, we must protect tribal sovereignty.

“It’s ironic—this is a substance that has been used by tribes for healing going back millennia. And there’s an opportunity for them to be able to be part of an economic opportunity that is taking place across the country. We need to grant them that authority,” he said. “I hope that there is a recognition that tribes deserve this latitude and this empowerment. And that we vote in favor of it to allow them to proceed as has taken place in states around the country.”

In a press release, Haaland, who is co-chair of the Congressional Native American Caucus, said that “tribal cannabis programs are giving Native American communities access to diverse revenue streams.”

“This amendment is important to ensure tribes can exercise their rights as sovereign nations and rightfully reflects that to promote self-determination while maintaining the economic opportunities that come with them,” she said.

Separately on Wednesday as part of a voice-vote approval of a bloc of noncontroversial amendments, the House signed off on a measure to add the U.S. Virgin Islands to the list of jurisdictions protected by the funding bill’s existing medical cannabis rider. It had been inadvertently omitted from the language when the legislation was introduced.

Even setting aside the roll call votes yet to come on the state-focused measure, the House is far from done considering marijuana amendments to the overall large-scale spending bill funding parts of the federal government for Fiscal Year 2020.

On Tuesday, the House Rules Committee also made in order measures to block the U.S. Department of Veterans Affairs from punishing doctors that issue medical cannabis recommendations in states where it’s legal and directing the Food and Drug Administration to develop guidelines that would allow certain levels of CBD in the food supply and as health supplements.

Another Rules-approved amendment, introduced by Rep. Alexandria Ocasio-Cortez (D-NY), would take $5 million from Drug Enforcement Administration and distribute it to an opioid treatment program.

This isn’t the freshman congresswoman’s first time floating a bold drug policy measure. Last week, her amendment to a separate appropriations bill that would have lifted barriers to research for psychedelic substances including psilocybin and MDMA was advanced by the Rules Committee but defeated on the House floor.

While the successful voice votes on the Justice Department-focused amendment is a positive signal for reform advocates, Thursday’s roll call votes will show just how far lawmakers are willing to go to protect cannabis consumers and patients in states that have decided to legalize.

Aaron Houston contributed reporting for this story from Washington, D.C.