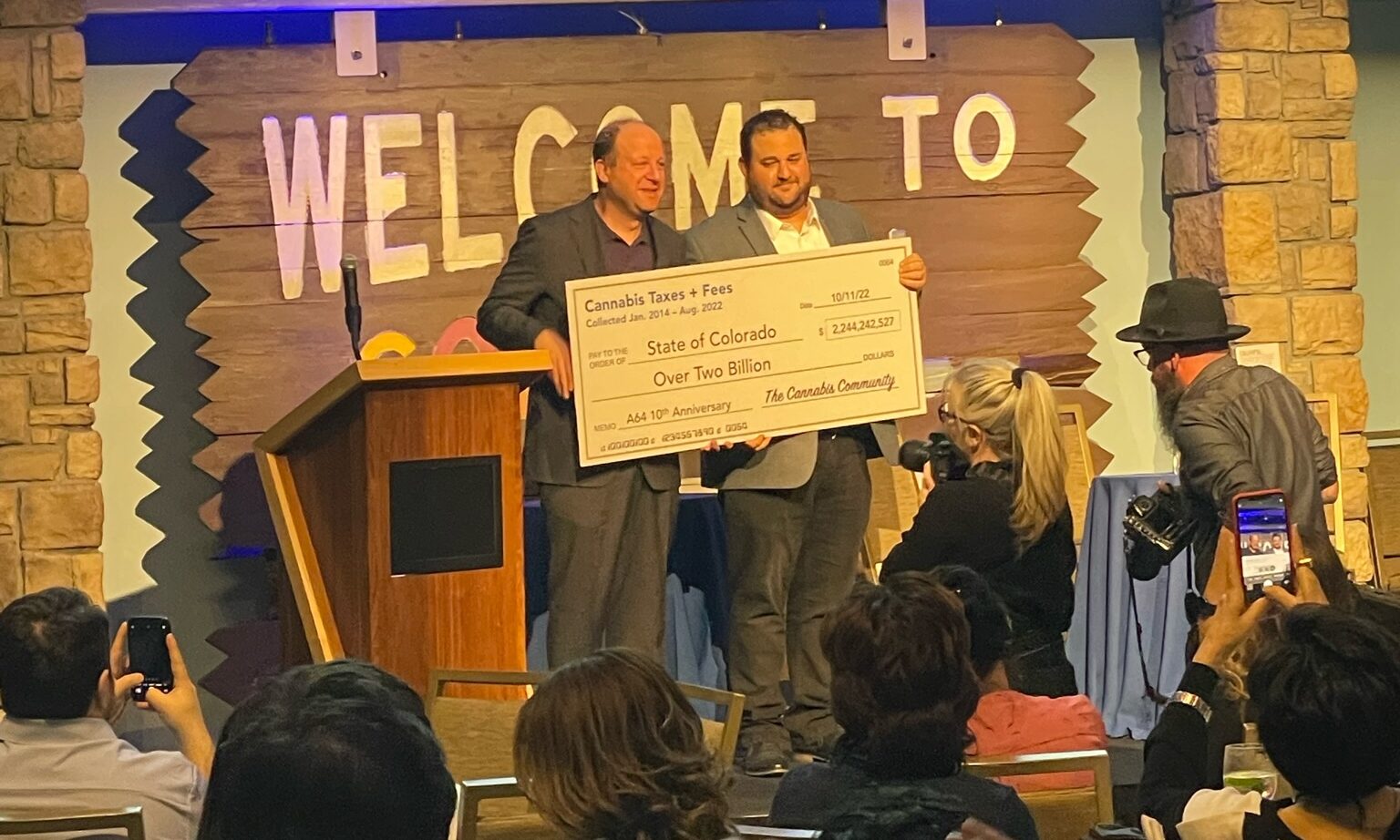 Top Colorado elected officials attended an event on Tuesday to celebrate the 10th anniversary of the state’s move to legalize adult-use marijuana. That includes key political figures who previously opposed the reform, one of whom is now a U.S. senator and previewed new cannabis legislation he will soon be filing in Congress.

In November 2012, voters in Colorado and Washington State approved first-of-their-kind initiatives to legalize cannabis for adults—and those state-level experiments have been widely cited as evidence that regulating cannabis sales has turned out to be sound socioeconomic and public health policy. As such, a growing number of other states have continued to follow with each passing election cycle.

At Tuesday’s event in Colorado, advocates, industry operators and officials like Gov. Jared Polis (D) marked the decade anniversary, albeit a few weeks early. A theme that threaded the speeches was that the state’s experience has proved that prohibitionist concerns about issues like youth consumption and public safety have not come to fruition 10 years later.

Polis was also presented with a giant mock check for $2.2 billion to symbolize the amount of adult-use cannabis tax and fee revenue the state has collected since legal sales began.

“It’s a milestone for Colorado, the country, the world,” Polis said. “Colorado’s positive experience shows that not only did people’s worst concerns never materialize, but charted a new way forward in a positive way for reducing underage use, driving drug dealers out of business, making our communities safer, empowering people to have the freedom to make the choices they want to make, to treat themselves for medical conditions.”

“The launch of the market really proved that we can end prohibition and replace it with a sensible system that regulates marijuana like alcohol, and where medical patients have a safe and legal way to access cannabis,” he said. “It also allowed us to step away from the unjust, arcane punishments of the past.”

Some of those now cheering the policy reform were vocal opponents of the legalization initiative in the lead-up to the vote. That includes U.S. Sen. John Hickenlooper (D-CO) and Denver Mayor Michael Hancock (D), who both also appeared at Tuesday’s event.

Hancock and Hickenlooper, who at the time was Colorado’s governor, unsuccessfully attempted to convince voters to oppose Amendment 64 at the ballot in 2012. But after the reform was approved and implemented, they recognized that the sky did not fall in Colorado and they’ve each touted the benefits of legalization as it relates to the economy, racial justice and more.

10 years ago, Colorado became the first state to legalize marijuana – and the rest is history!

Joined @GovofCO, @MayorHancock, and others to celebrate the incredible work that has made our legal cannabis industry a success. pic.twitter.com/9hddQ2Cxba

Hickenlooper said even after the vote that the policy was “reckless,” and he made an infamous quip on election night admonishing cannabis consumer not to “break out the Cheetos or gold fish too quickly.”

With time, however, the governor-turned-senator has become an ally in the movement to end federal marijuana prohibition and has recognized that his prior concerns were unfounded.

He reiterated that point on Tuesday and called for federal descheduling to “legalize marijuana in America.”

“I did oppose Amendment 64 based on the concerns about youth use and health impacts,” the senator acknowledged. But with 10 years of experience, he said he’s able to confidently go into the U.S. Senate and tell colleagues that “since we’ve legalized marijuana, there has been no increase in teenage experimentation, no increase in consumption, no increase in driving while high,” while touting “all the myriad benefits” of reform.

The senator also said that he will soon be introducing legislation to create a federal task force to explore national rules for a regulated cannabis market once marijuana prohibition ends.

The bill will would bring “government agencies, industry stakeholders, federal law enforcement, and communities most impacted by a legal cannabis marketplace together as part of that process,” a spokesperson for Hickenlooper’s office told Marijuana Moment.

“We are constantly trying to figure out what is the best system how can we improve this system” at the state level, the senator said. “And we’re at a point now where I think it is time for the federal government to step up to the big boy table and make that move.”

He added that congressional lawmakers will be working “very hard” to pass bipartisan cannabis banking reform legislation during the lame duck session. “It’s got a decent shot,” he said.

“This is him opening the door and saying, ‘we’re gonna start moving down this process, this pathway and we’re gonna move forward. It’s our intention,'” he said.

“We really did lead the way in marijuana legalization,” the senator separately said at an event organized by a cannabis industry association earlier this year. “I didn’t want Colorado to be the experiment—the Petri dish—for one of the great social experiments of the century so far. And we legalized it even though I opposed it.”

“I think we’ve proven and demonstrated that there is no increase in experimentation among teenagers. There is no change in frequency of use, no change in driving while high—all the things we most worried about didn’t come to pass,” Hickenlooper said at the time.

While youth use not increased, the senator has repeatedly noted that more elderly residents have been patronizing cannabis shops.

Mason Tvert, a partner at VS Strategies who co-directed the Yes on 64 campaign, acknowledged at Tuesday’s event that Hickenlooper “had his concerns about legalization, and we did not always see eye to eye on those concerns.”

“To his credit, he not only respected the decision of the voters, but also defended it,” Tvert said. “He stood up for Colorado in the face of potential federal interference, and he is now a leading voice in support of federal cannabis policy reform.”

Hickenlooper teased Tvert about the attacks he faced for opposing the legalization initiative, and he jokingly said that, after all of this time, “I forgive you.”

The senator isn’t the only Colorado cannabis convert. Denver’s mayor has similarly embraced the reform after advocating against Amendment 64, which set off a wave of state reforms that is expected to expand again following the midterm elections next month.

Hancock was a vociferous opponent of the legalization initiative, calling marijuana a “gateway drug” and saying that the reform would send the wrong message to young people. He said that he didn’t want Colorado to lead in the legalization experiment and expressed concerns about negative impacts to the tourism sector.

But in more recent years, he’s taken a liking to the cannabis industry. He said that legalization was “working” in 2018, citing data on job creation and tax revenue from regulated marijuana sales.

At the event on Tuesday, Hancock again said that his fears about legalization did not materialize and he now believes cannabis should be regulated in a manner similar to alcohol.

Joined with @GovofCO, @SenatorHick, @VScannabislaw and others last night to mark 10 years since voters passed Amendment 64. Denver's leadership and work on regulating the once-budding marijuana market, and ensuring equity and opportunity in the industry, remains the standard. pic.twitter.com/YijuLH9azD

He joked that he was “proud to be here at the loser’s rally of Amendment 64,” and said he appreciated how advocates “waited for 10 years to bring us all back up and say, ‘now, take that foot out your mouth.'”

He also called for federal reform to legalize cannabis, allow the industry to access traditional financial services and expunge prior marijuana convictions.

“Thanks to decades of deeply ingrained anti-cannabis policies and propaganda, many elected officials had concerns about legalizing and regulating cannabis for adult use,” Tvert said in a press release.

“To their credit, Sen. Hickenlooper and Mayor Hancock respected the voters and fulfilled their duties to implement Amendment 64, navigating unknown policy and political territory under the constant threat of federal interference,” he said. “Their positions on cannabis have evolved significantly since 2012, and they are now working to advance further reform and to repair the damage caused by prohibition.”

Polis, for his part, had already been an established supporter of cannabis reform as a congressman in 2012. But while he did not join Hickenlooper and Hancock in opposing Amendment 64, he nonetheless disappointed advocates by remaining neutral on the ballot initiative ahead of Election Day.

He’s since become a fixture of the movement, embracing cannabis culture, enacting legislation to expand on the voter-approved reform, taking executive action to provide relief to victims of the drug war and pushing for further congressional action.

Just this week, the governor led a letter to leaders in Congress, imploring them to pass a bipartisan marijuana banking bill with what’s left of the session.

In a stance that somewhat echoes his disposition ahead of the Colorado marijuana vote a decade earlier, the governor has so far stayed neutral on an initiative on the state’s ballot this year that would legalize certain psychedelics even though he has backed the general concept of removing criminal penalties for the substances.