A Virginia Senate committee on Friday approved a bill to legalize marijuana in the Commonwealth, bringing the proposal one step closer to a full floor vote. Before advancing the legislation to another panel, lawmakers defeated a proposal to remove home cultivation rights for cannabis.

The Senate Rehabilitation and Social Services Committee approved the legislation in a 8-7 vote. Members also accepted a series of recommended amendments from a newly formed subcommittee that’s singularly focused on marijuana policy and that held two hearings on the bill earlier this week. 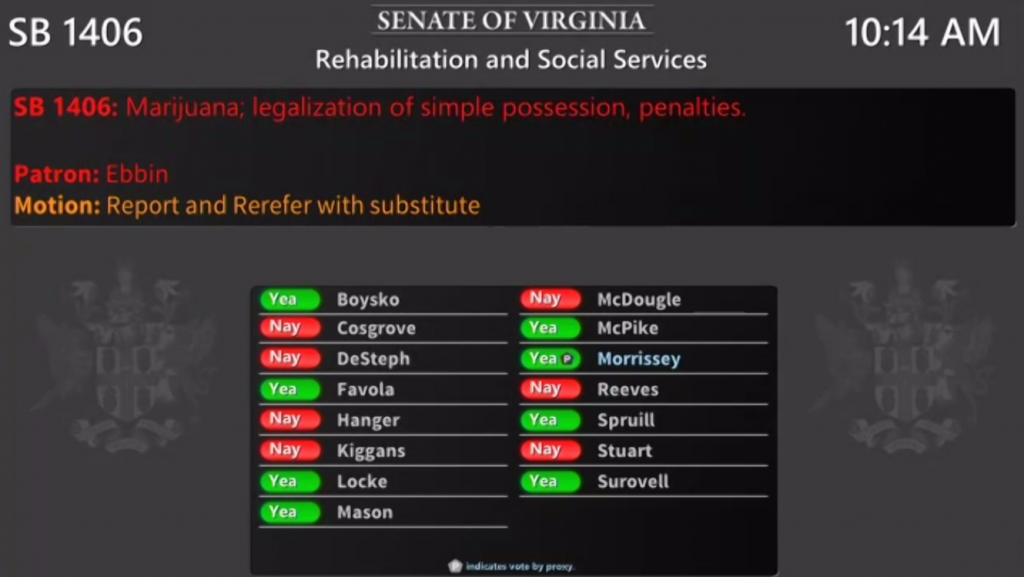 The legislation, which was unveiled by Gov. Ralph Northam (D) last week and is being carried by top Senate and House leaders, would create a system of regulated and taxed marijuana sales and production, and allow adults 21 and older to purchase and possess up to one ounce of cannabis and cultivate up to four plants for personal use, two of which could be mature.

During Friday’s hearing, the panel discussed and approved the subcommittee proposals. That includes an amendment to establish an independent agency to regulate the marijuana market, rather than have the state’s existing alcohol division handle it as would be the case under the governor’s original proposal. Because of the time it will take to set up that agency, the implementation timeline will be pushed back to 2024 instead of 2023 unless the General Assembly moves to expedite the process in the meantime.

Members also agreed to keep a home grow option for adult consumers, a significant win for reform advocates who argue it will provide a needed access point, particularly to low-income people.

There were two votes on a proposal to remove the personal cultivation provisions; the first was narrowly defeated 8-7 and the second was more soundly rejected 10-5.

“NORML is pleased that cooler heads prevailed, defeating an absurd motion to remove personal cultivation from the bill. Virginians have been very outspoken in their support for this priority, whether it be for medical or adult-use, and the legislature should heed the demands of their constituents,” Jenn Michelle Pedini, executive director of Virginia NORML, told Marijuana Moment. “Without the ability to cultivate for personal use, many Virginians will be left without any reasonable measure of access to safe cannabis products in their area.”

“We applaud the subcommittee for smartly including language to promulgate safety awareness and best practices for personal cultivation, and to require that reasonable steps be taken to secure plants from underage access,” Pedini, who also serves as NORML’s national development director, said.

Lawmakers also voted in favor of an amendment to revise the legislation so that local jurisdictions would have to opt out of allowing cannabis businesses to operate in their areas, instead of opt in as it was initially drafted.

The rationale for that decision came down to a recent policy change in Virginia that no longer allows for “dry” counties and instead requires jurisdictions to opt out of allowing alcohol businesses via referendum.

The full committee further accepted a change to tighten eligibility requirements in social equity licensing policy. The original bill stipulated that a business must have 50 percent ownership by disadvantaged people, but members approved an amendment upping that to 66 percent.

Members further accepted proposals to strengthen public education campaigns on substance misuse and to allow for the integration of medical cannabis, adult-use marijuana and hemp businesses, rather than require them to operate separately.

Sen. Jeremey McPike (D), chair of the panel’s marijuana subcommittee, said in closing remarks that he appreciates the how members collaborated on this proposal, saying “even though there were folks that oppose the overall idea, I think in a bipartisan way, members of the subcommittee really looked to try to improve the various components and parts in a very collaborative manner.”

“This still is going to go through several committees and several more opportunities to better refine this down” he said.

With this vote, the legislation now heads to the Judiciary Committee, which, in its jurisdiction, will take on provisions related to crimes and penalties. After that, the Finance Committee will look at components such as the proposed tax policy before the bill heads to the full Senate floor.

Meanwhile, the House of Delegates is expected to soon take up a companion version of the legislation.

At least one senator took issue with the expediency of this legislative process, complaining about the time he received to review the newly revised lengthy bill ahead of Friday’s meeting.

How in the hell am I supposed to throughly read a 515 page marijuana legalization bill dropped in front of me @ 8:20 am for a committee that gaveled in at 8:00 rehab and social services committee and want me to vote on it. Really? Seriously really?

The legislation’s provisions as introduced have been informed by two official state studies on legalization that were recently conducted by a legislative commission and a separate working group comprised of four Virginia cabinet secretaries and other officials, both of which looked at how to effectively implement legalization and submitted recommendations to the governor’s office late last year.

Those studies were required under a marijuana decriminalization bill that was approved last year.

Many of those recommendations have been incorporated into the new legislation, including provisions to promote social equity in the cannabis market. Notably, it would also apportion almost half of the tax revenue the state collects from marijuana sales to funding pre-kindergarten education—a policy championed by First Lady Pamela Northam.

A new 21 percent tax would be imposed on cannabis sales, and local jurisdictions that allow marijuana businesses to operate could levy an additional three percent tax. Existing state sales taxes would also apply on purchases, for a total potential 30 percent tax rate.

Advocates have broadly welcomed the legislature’s quick move to enact legalization, though some have expressed frustration about the limited scope of its social equity provisions.

We propose strongly that Virginia allocates 70% (not 30% as currently written in the bill) of tax revenues to the Cannabis Equity Reinvestment Fund.

Our Legislative Director Ashna Khanna on SB 1406 to legalize marijuana:

1. There's a loophole in social equity license eligibility that would not foster ownership by people most harmed by prohibition.

2. Funding & oversight for social equity must be built into the new industry. pic.twitter.com/D8wxcNHoB6

This introduction of the bill came one month after the governor included provisions to lay the groundwork for cannabis legalization in a budget proposal that also calls for millions of dollars to support expungements. Northam had campaigned on merely decriminalizing possession, but he publicly backed broader legalization of marijuana for adult use in November.

Northam said during his State of the Commonwealth address last week that cannabis prohibition was deliberately enacted as a means to discriminate against people of color.

Separate legislation to legalize cannabis for adult use was filed by Del. Steve Heretick (D) earlier this month. A companion version of that bill, sponsored by Sen. Joe Morrisey (D), was also up for consideration by the Senate panel on Friday, but that was formally incorporated into the governor’s proposal and he was added as a chief sponsor.

Meanwhile, legislation to stop police from searching people or seizing property based solely on the smell of marijuana in Virginia is set to take effect after lawmakers adopted recommended changes from the governor in October.

Also during the recently concluded special session, Northam signed another bill that will allow people issued summonses for cannabis offenses under the state’s new decriminalization law to prepay their civil penalty rather than having show up in court.