The second-largest bank in the U.S. is shutting down the account of a research institute that’s federally authorized to cultivate and study Schedule I substances like marijuana and psilocybin mushrooms.

Bank of America (BoA) abruptly notified the Scottsdale Research Institute (SRI) that it would be closing its accounts last week, without a clear explanation of the reasoning. A letter from the bank that was shared with Marijuana Moment on Monday says the decision was made after “a careful review of your banking relationship” and that the action is “final and won’t be reconsidered.” 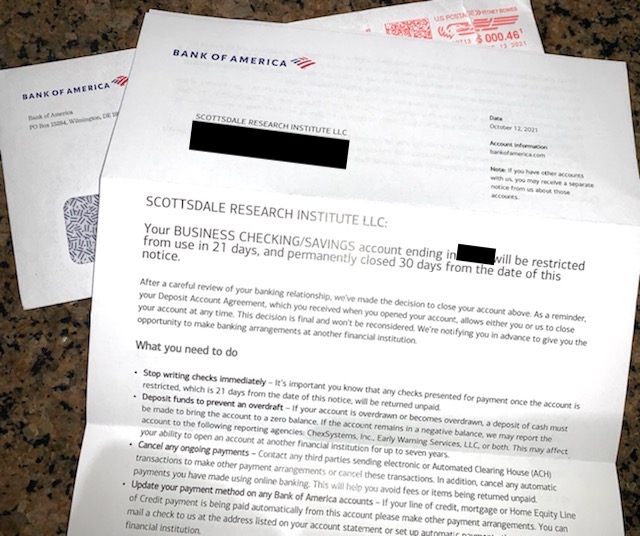 SRI has spent years fighting for expanded access to research-grade controlled substances to study their therapeutic potential, in part by litigating against the Drug Enforcement Administration (DEA) on issues such as cannabis scheduling. In May, it received preliminary approval from the agency to be one of the first new federally authorized cultivators of cannabis for research, effectively ending a decades-long monopoly on such manufacturing.

The institute is already getting bids from other financial institutions that want to take on the account after chief investigator Sue Sisley shared the news of the BoA closure on social media.

“We just wanted to expose wrongdoing of these big banks,” Sisley told Marijuana Moment, adding that they want to “show the public that even federally legal operations are being unfairly targeted by these large banks who refuse to look at our federal regulatory documents.”

It takes significant resources to obtain and maintain DEA clearance to grow and study Schedule I substances like marijuana. One theory that Sisley floated was that BoA may have decided to end the business relationship after SRI was more recently cleared to cultivate psilocybin for research, but the bank provided “zero justification.”

“Maybe it was the mushrooms that freaked them out?”

Marijuana Moment reached out to BoA for comment, but representatives did not respond by the time of publication.

Sisley said the institute received “no warning,” with “no ability to speak to somebody logical who could review our operating agreement with DEA. We have been plant-touching since our start with Bank of America 10 years ago” and were “always transparent about that.”

“We have a contract with DEA. We are growing cannabis for [Food and Drug Administration] clinical trials and selling it to the DEA,” she said. “It’s unconscionable the way they are behaving—and further proof that the word ‘cannabis’ continues to be completely radioactive even though this is a 100 percent federally legal operation.”

“Fortunately, there are banks that care about the progress of federally regulated and federally legal research and are eager to step up and support us immediately,” Sisley added. “We will be moving our funding from Bank of America and never returning there. Our research continues without harm because other banks that care about scientific freedom were able to step up. Bank of America doesn’t even have the decency to provide an explanation after a decade of banking with an openly plant-touching business.”

SRI has been behind several legal challenges imploring the federal government to remove research barriers for Schedule I drugs like marijuana and psychedelics.

In August, a federal appeals court has dismissed SRI’s petition to require DEA to reevaluate marijuana’s scheduling under the Controlled Substances Act (CSA)—but one judge said in a concurring opinion that the agency may soon be forced to consider a policy change anyway based on a misinterpretation of the medical value of cannabis.

The lawsuit received oral arguments in June and largely centered on DEA’s 2020 denial of a one-page marijuana rescheduling petition filed by a separate individual. In its response, the agency argued that marijuana has no currently accepted medical value.

The petitioners initially filed their lawsuit, Sisley v. DEA, against the federal agency in May of last year, contending that DEA’s justification for maintaining a Schedule I status for cannabis violates the Constitution on numerous grounds. DEA attempted to dismiss the case, but the Ninth Circuit rejected that request in August.

In a separate case, the institute successfully forced DEA to issue an update on the status of its application to grow cannabis and then got the Justice Department to hand over a “secret” memo that DEA allegedly used to justify a delay in deciding those proposals.

Meanwhile, DEA is taking additional steps to promote research into the potential risks and benefits of marijuana and certain psychedelics. Last week it proposed a dramatic increase in the legal production substances like cannabis, psilocybin, LSD, MDMA and DMT to be used in research next year.

DEA had already massively upped its proposed 2021 quota for cannabis and psilocybin last month, but now it’s calling for significantly larger quantities of research-grade marijuana and a broader array of psychedelics to be manufactured in 2022.

But despite these developments and the changing policy landscape surrounding marijuana and psychedelics at the state and local level, many financial institutions remain reluctant to service clients that work with these currently federally illicit products.

The number of banks and credit unions reporting that they work with marijuana businesses ticked up last quarter, according to federal data released last month.

Lawmakers have been working to to enact clear, statutory protections for banks and credit unions that work with the marijuana industry to alleviate remaining hesitation in the financial services industry about working with cannabis businesses. That would be accomplished through House-passed standalone legislation, or an amendment that was attached to a defense spending bill last month.

In the meantime, Sisley said SRI could sue BoA over the account cancelation, but it has other things to focus on.

“We have important work to do,” she said. “We need to stay on our path to helping whole plant cannabis flower walk through the entire FDA drug development process.”

States Promote Federal Hemp Survey Being Mailed Out This Week To More Than 20,000 Farmers

Illinois Has Sold More Than $1 Billion In Marijuana So Far This Year, State Officially Announces