Americans would rather live in states where marijuana is legal than in those that continue to criminalize cannabis consumers. That’s according to a new survey published on Monday by real estate company Redfin.

Among those who recently moved to a new metro area, 46 percent said they prefer to reside somewhere marijuana is “fully legal,” compared to just 22 percent who want to live in a place with prohibition still in effect.

The share of those who like legalized jurisdictions includes more than one in ten respondents—12 percent—who say they would only consider living in places where cannabis can be legally purchased. On the other side, 10 percent said they would rule out moving to areas that have ended criminalization.

Thirty-two percent of people taking the survey said they don’t care about the marijuana issue when it comes to where to live. 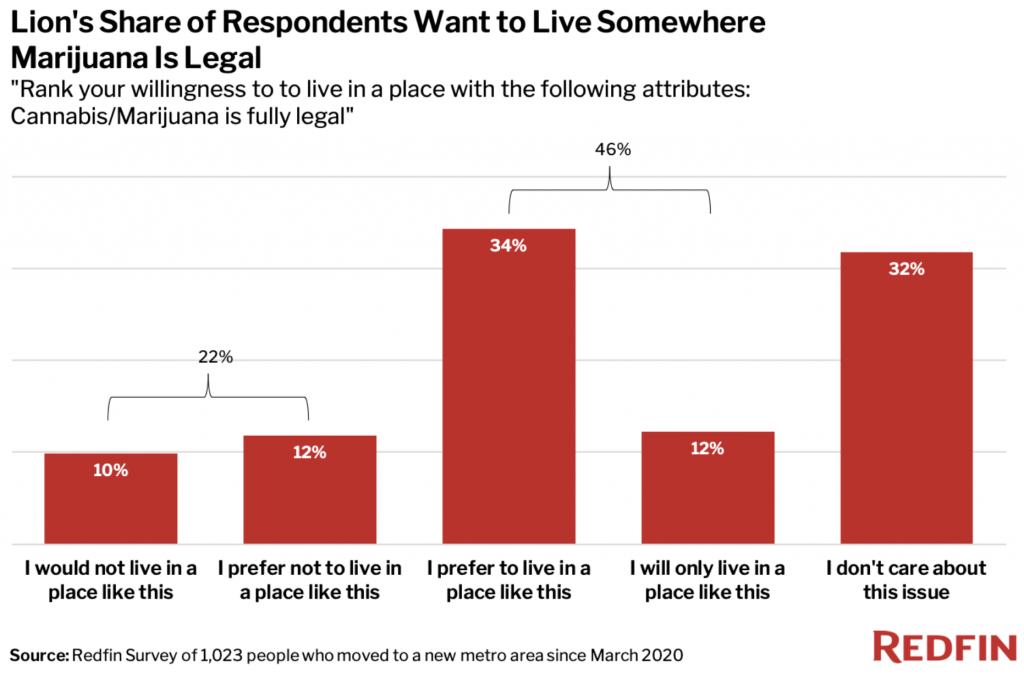 The survey, which involved 1,023 U.S. residents who moved to a new home during the 18 months prior to answering the questions in August, also asked about other issues such as abortion policy, voting rights and anti-discrimination laws for gender and sexual orientation.

Redfin said that while public policies on cannabis and other issues are important factors in deciding where to move, other considerations often take precedence.

“People take the politics of a place into consideration when deciding where to move, but the truth of the matter is that other factors including housing affordability and access to jobs and schools take priority,” Taylor Marr, the deputy chief economist for the company, said in a press release. “Oftentimes this means someone will move from a blue state to a red state (or vice versa), but choose a home in a neighborhood where most people hold the same political views as they do. Austin—a liberal Texas enclave that’s attracting scores of left-leaning folks from pricier coastal cities—is just one example.”

Prior analyses, including one published this year that uses data from online real estate marketplace Zillow, has shown that marijuana legalization is associated with higher home property values. “Home values increased $6,338 more in states where marijuana is legal in some form, compared to states that haven’t legalized marijuana,” it concluded.

Last year, a separate analysis from economists at the University of Oklahoma similarly found that states that legalize marijuana see a boost in housing prices, with the effect most pronounced once nearby retail outlets open for business.

Research—including a study released this month that was authored by a federal official with the U.S. Department of Agriculture—has tied cannabis legalization to lower crime rates, a key factor in home values and neighborhood desirability.

Impact Of Marijuana Legalization On Crime Reduction Is Being Underestimated, New Study Finds

Nevada Sold More Than $1 Billion In Marijuana In One Year, Officials Report