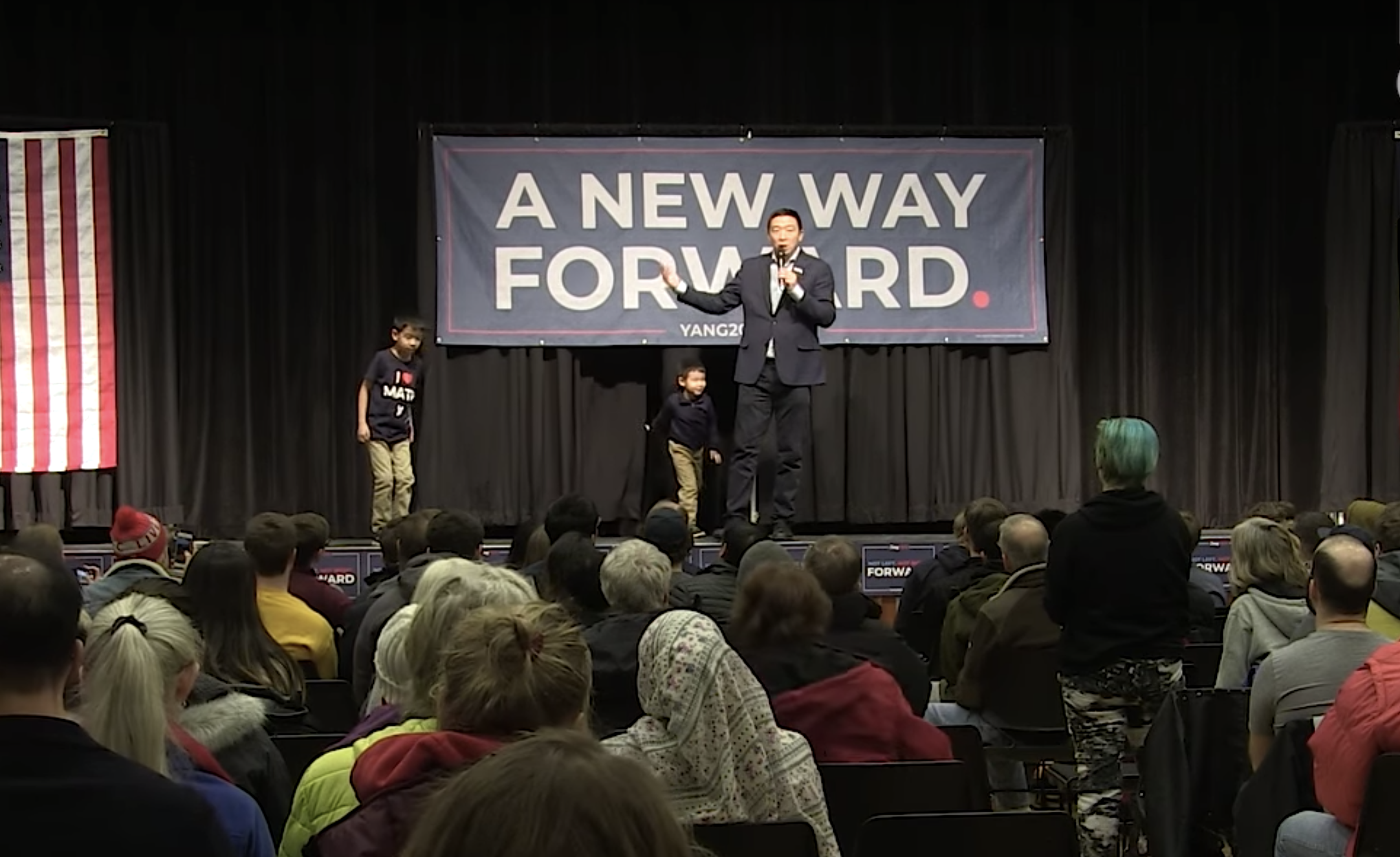 Andrew Yang reiterated his support for comprehensive marijuana reform and mass pardons at a recent Iowa campaign stop—this time with his two young sons bouncing around on stage. He also appeared to reveal another shift in the scope of how he would apply his clemency powers as president.

The 2020 Democratic presidential candidate was asked by a voter to share his thoughts about mass incarceration. Yang, who is vying for delegates in the state’s caucus on Monday, laid out his plan, apparently undistracted by the horseplay at his feet.

“It’s immoral and criminal what we have done to—in particularly communities of color—with our system of criminal justice and mass incarceration,” he said, adding that his first step would be to abolish private prisons because “we cannot have prisons that are running on a profit motive that literally benefit from higher rates of recidivism and shoddy treatment of inmates.”

At a time when opponents of reform are arguing that legalization sends a bad message to youth, Yang had no problem voicing his support for ending cannabis prohibition in front of his kids.

“The other thing I would do is I would make marijuana legal throughout our country and then I would pardon everyone who’s in jail for a non-violent drug-related offense,” he said.

That latter pledge is notable. Yang has gone back and forth on the specifics of his pardon proposal, at times broadly calling for clemency for those convicted of all non-violent drug offenses and at other times explicitly reserving the benefit for people convicted over cannabis.

Last year, Yang turned heads when he committed to offering pardons for all non-violent drug offenses. But pressed on the promise during a subsequent interview with ABC’s This Week, he said that while he’s also in favor of decriminalizing opioids, he “was referring to marijuana-related drug offenses specifically” in that instance.

Yang’s drug policy reform agenda has evolved significantly over the months since his campaign launched, however, so it’s not clear whether this latest statement reflects a genuine expansion of the pardon plan or another instance of mis-speaking by the candidate.

Typically Yang adds that he’ll issue the pardons on the unofficial marijuana holiday, April 20 (4/20), and give everyone released from prison a high five on the way out. He skipped that part in the most recent remarks.

“I would mass pardon everyone because many of them did things that are not crimes in certain parts of the country, and I think it’s reprehensible that presidential pardons are always used on these rich, well-connected weirdos,” he said. “We should be pardoning people we’ve never heard of who should not have been in jail in the first place.”

After cannabis is legalized, private prisons are abolished and mass pardons are granted, Yang said “we need to invest in our prison system to make it genuinely more rehabilitative because right now it’s not.”

“It’s meant to separate people from society. It’s very, very difficult for them to transition back,” he said. “They come out, they don’t have a leg to stand on, they often can’t find a decent job, and so they struggle and many of them end up returning to the behaviors that got them into trouble in the first place.”

“I would like nothing more than to turn our prison system into a system that’s genuinely trying to rehabilitate people into society rather than just punish and separate them from society,” he added.

Another aspects of Yang’s drug reform platform that he didn’t touch on in these newest comments concerns psychedelics. The candidate has voiced support for loosening laws on substances such as psilocybin to make them accessible for treatment. And he specifically called for the legalization of so-called magic mushrooms for therapeutic purposes for veterans earlier this month.