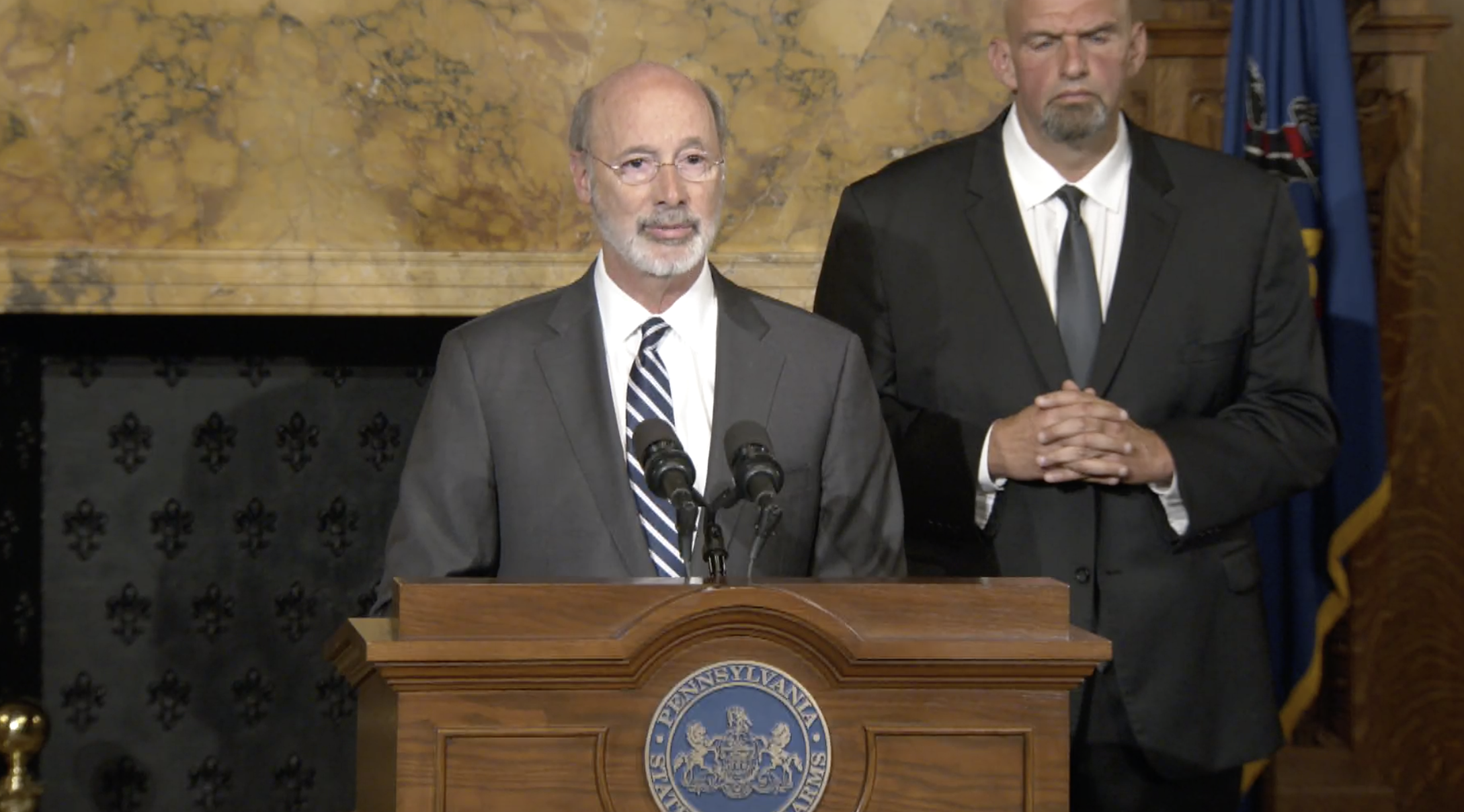 Pennsylvania’s governor and lieutenant governor renewed their support for legalizing adult-use marijuana in the state during a press conference Thursday afternoon, criticizing the Republican-led legislature for failing to move on a proposal put forward last year.

“There’s nothing going on,” Gov. Tom Wolf (D) said at the event. “That’s why we’re having this press conference. We’re saying, ‘Remember a year ago?’”

.@GovernorTomWolf and @FettermanLt today called on the legislature to take up the legalization of adult-use cannabis to help with the state’s economic recovery amid COVID-19.https://t.co/RB32ngCqDa

— Office of the Governor (@GovernorsOffice) September 3, 2020

Wolf and Lt. Gov. John Fetterman (D) in recent months have been at loggerheads with the Republican-controlled House and Senate over unrelated policies, such as COVID-related school and business closures. But while GOP leaders have criticized the pair’s legalization plan as a distraction from more pressing issues, Wolf and Fetterman said Thursday that an infusion of marijuana tax revenue could be routed toward education, small businesses and criminal justice reform programs.

“It’s a turnkey solution for Pennsylvania,” Fetterman said, challenging critics to name a single other solution that could so immediately and effectively route hundreds of millions of dollars to the state at a time when revenue is hurting. “I would pitch this as much as a jobs bill, as much as anything.”

Sen. Sharif Street (D), who has led the Senate push for legalization and who joined Wolf and Fetterman at the press conference, noted that the state auditor general estimated adult-use legalization could bring in as much as $600 million dollars in annual recurring tax revenue for the state. Washington State saw $319 million in cannabis revenue in 2018, while Colorado made $266 million, Wolf said. “Both of those states are much smaller than, of course, Pennsylvania.”

Street, whose grandfather was a dairy farmer, also pointed out that marijuana could effectively be grown by Pennsylvania farmers alongside other crops, providing another potential revenue stream at a tough economic time. “Cannabis is a crop—and this is something people may not know—that works very well in rotation with corn for dairy farmers,” he said, adding that “the excess parts of the plant that aren’t traditionally good for commercial purposes can be used for feed.”

All three speakers also emphasized the effect legalization would have on criminal justice. In Pennsylvania, Street said, Black and Latino people are four to five times more likely to have a cannabis-related encounter with police than white people despite similar use rates. Fetterman pointed to a chart showing the past decade of the state’s marijuana-related arrests, which average about 20,000 per year. “If you go over the span of a decade,” the lieutenant governor said, “you’re talking nearly a quarter of a million Pennsylvanians.”

With marijuana legalization, we can restore justice to those who have endured extreme punishments for marijuana-related offenses.

Decriminalizing marijuana is an important and overdue step when it comes to criminal justice reform.

Wolf and Fetterman are proposing a plan that would legalize, tax and regulate the sale of commercial marijuana. It would route half the revenue to restorative justice programs “that give priority to the harm done to crime victims and communities as the result of cannabis criminalization,” according to a press release, while the other half would go to aid the state’s historically disadvantaged businesses, “many of which have had difficulties attaining other assistance because of systemic issues.”

The governor initially came out in favor of legalization in September of last year, urging the legislature to “seriously debate” passing legislation to allow marijuana commercial sales while simultaneously pursuing more immediate steps to decriminalize cannabis possession and expunge past criminal convictions. That followed Fetterman embarking on a listening tour across the state, during which he talked to communities and gathered mailed and online comments from tens of thousands of residents.

At Thursday’s event, the pair said that 65 to 70 percent of people they heard from supported legalization. And despite Republican leaders’ opposition to the proposal, Street said that he knows of “a significant number” of GOP lawmakers who he thinks would vote for a marijuana bill.

Republican lawmakers have accused the governor of “legislating by press conference” but failing to take up formal negotiations with lawmakers. Wolf pushed back on that claim at the press conference, saying he’s “inviting that conversation to start.”

“We unveiled that a year ago, and nothing’s happened,” he said. “It’s been dead silence.”

Republicans have also criticized a plan to legalize a drug when other, more dangerous drugs such as opioids are already causing problems in the state. The speakers at Thursday’s press conference said those criticisms don’t make sense.

“Safe, legal access to cannabis is exactly what we need to combat that,” Fetterman said. “I think quite frankly they’re trying to deflect because they know it’s popular.”

Street predicted that marijuana use by teens would actually go down after legalization—a phenomenon that’s been seen in other states—as licensed retailers replace unregulated sales that currently meet the state’s demand for marijuana.

“I think what we ought to be focusing on is programs that help people,” Wolf added. “This is a heaven-sent opportunity to do that.”

Despite raising the issue a year ago, Wolf and Fetterman have vocally returned to the issue this summer. Last week the governor held a press conference touting the economic benefits of legalization and hinted that the state itself might run adult-use marijuana retail stores—a plan that would be unique among legal states and could potentially increase revenue, though he didn’t mention that specific idea at Thursday’s availability with reporters.

Repeatedly during the latest press conference, Fetterman declared that supporting ongoing cannabis prohibition has become a minority, even fringe viewpoint. Legalization, he said, is an obvious path forward. According to some recent polls, majorities of all major political groups, including Republican voters, support cannabis legalization.

But Sen. Majority Leader Jake Corman (R) isn’t so sure. In a response posted after Thursday’s press conference, he said not to expect movement on legalization anytime soon.

It was Winston Churchill who said: ‘Never let a good crisis go to waste.’ We have long maintained that state laws should be changed because they are good policy for the people of Pennsylvania – not because of their potential to generate money. https://t.co/x8vTvBuoWt

Like with any issue, a bill would need to work its way through the Senate Committee process to be vetted. Movement on this issue should not be expected his fall.

“We look forward to receiving specifics about [Wolf’s] broad concepts including who would regulate this new industry, where it would be sold, strategies for enforcement and plans to minimize the impacts on the medical marijuana industry,” Corman said. “Like with any issue, a bill would need to work its way through the Senate Committee process to be vetted. Movement on this issue should not be expected his fall.”

The idea isn’t so popular with leadership on the other side of the state capitol either. In a statement issued by a House GOP spokesperson, the caucus criticized Wolf for trying to legalize marijuana while at the same time declaring that drug overdoses in the state have reached disaster proportions.

Republicans added that rather than “legalizing drugs as a way to tax and spend on new government programs,” the governor should work on getting people back to work, returning kids to school campuses and providing “the return to normalcy Pennsylvanians long for.”