A new poll shows that more than half of Americans feel that President Joe Biden has made little to no progress on a key campaign pledge to decriminalize marijuana during his first year in office—and most people also aren’t betting on him doing more to advance the reform in 2022.

The survey from YouGov and The Economist asked Americans to rate the president’s performance on six campaign promises in his first year and separately say how much progress they think he will make in the new year. 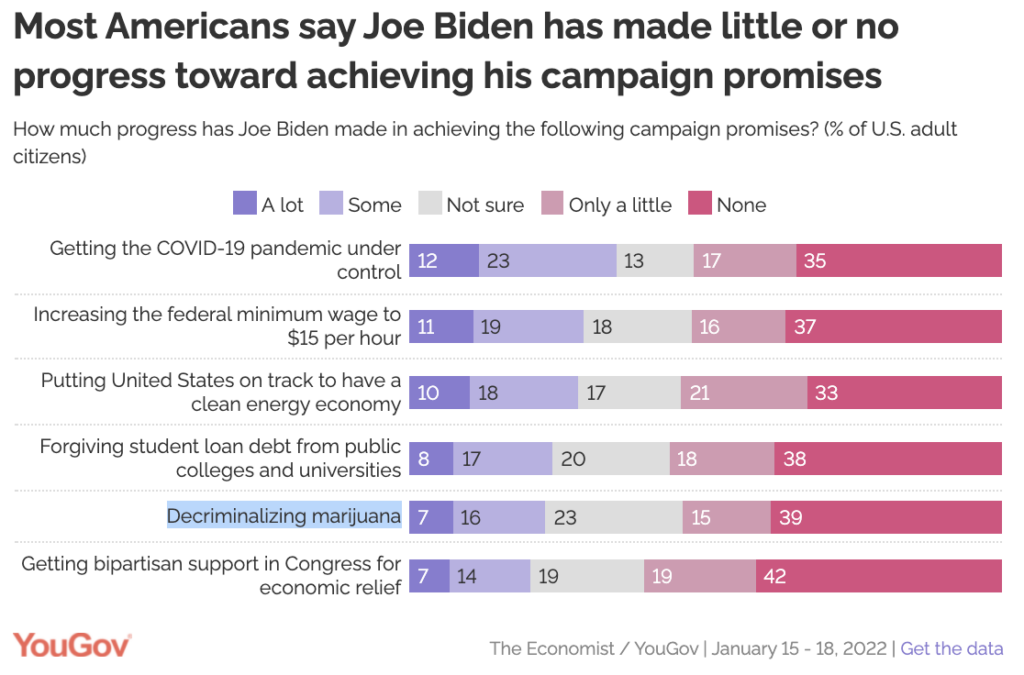 Respondents said they felt Biden made somewhat more progress on four of the other issues—student loan forgiveness, clean energy infrastructure, raising the federal minimum wage and COVID-19 response. Only on the issue of securing bipartisan cooperation in Congress for economic relief did Biden get lower scores than for cannabis reform.

Democrats were most likely to give Biden good marks for his progress on several of these issues, but 42 percent said that he’s made little to no progress on decriminalization. In contrast, 73 percent of those who identify as Republicans said he’s done little to advance the reform, even if that cohort is less supportive of the proposal overall.

Asked separately to look ahead for expectations in 2022, pessimism abounds, with 58 percent of respondents saying they anticipate the president will make little to no progress on marijuana decriminalization despite promising it to voters ahead of the 2020 election. Twenty-six percent said they weren’t sure what to expect and only 16 percent said they believe he’ll make some or a lot of progress. 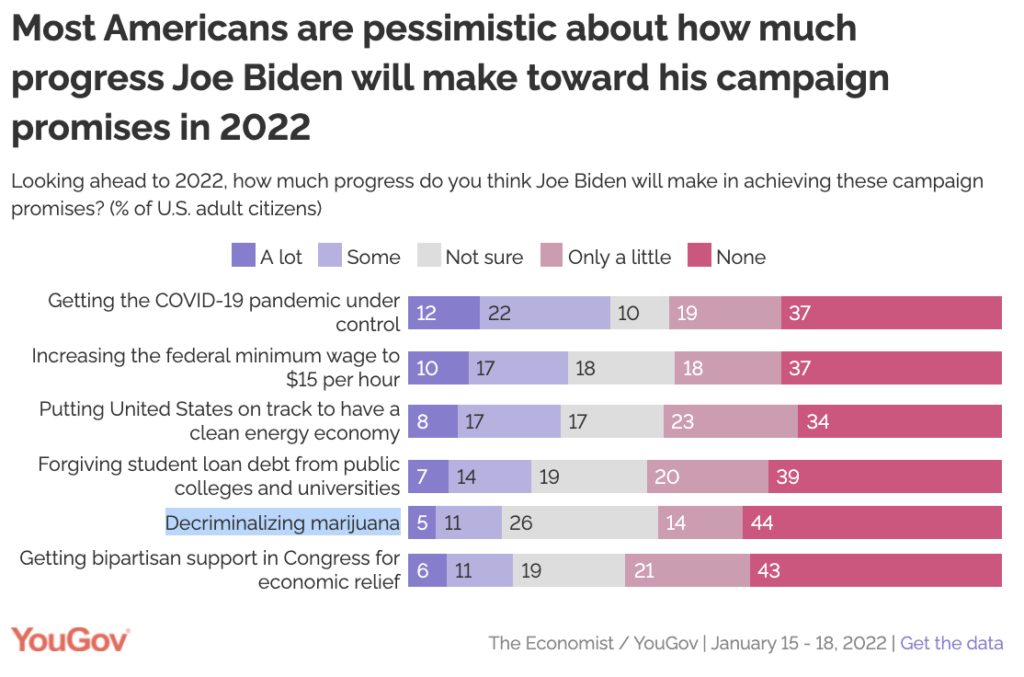 The poll also asked respondents how they personally view each of the campaign promises, and 58 percent said they support marijuana decriminalization, compared to 25 percent who are opposed.

After his first year in the White House, Americans have good reason to be skeptical about how committed Biden is to fulfilling his marijuana pledges. Beside decriminalization, he also said on the campaign trail that he’d move to reschedule cannabis and grant clemency to people with federal marijuana convictions—and none of that has happened yet.

The YouGov survey involved interviews with 1,500 Americans from January 15-18. The margin of error is ±3 percentage points.

Most Americans are pessimistic about how much progress Joe Biden will make toward six campaign promises in 2022, including:

While experts say it may not be possible for a president to unilaterally remove cannabis from the Controlled Substances Act, he could encourage agencies like the U.S. Department of Health and Human Services (HHS) and Justice Department to initiate the rescheduling process.

And while the poll didn’t ask respondents about clemency for marijuana prisoners, it’s a major unfulfilled promise that’s especially frustrating to advocates considering that he could grant a mass pardon with a stroke of the pen.

Biden has received about a dozen letters from lawmakers, advocates, celebrities and people impacted by criminalization to do something about the people who remain behind federal bars over cannabis. After months of inaction, some members of Congress like Sen. Elizabeth Warren (D-MA) have even sent follow-up letters demanding a response.