Major late contributions are flowing into the coffers of Michigan and Missouri political action committees that have been set up to support or oppose marijuana ballot initiatives in those states, Marijuana Moment’s latest analysis of campaign finance data shows.

In Missouri, physician Bradley Bradshaw continues to pour money into the Find the Cures committee in support of Amendment 3. For October, since filing quarter three reports, the group reports $343,000 in contributions from Bradshaw in the form of loans. He had contributed $7,500 in cash in quarter three, and also provided $186,121 in loans. Find the Cures is also getting late support from legal firms, with five outfits contributing $45,000.

A committee set up to combat Bradshaw’s Measure 3, Patients Against Bradshaw Amendment Formally Known As Find The Cures Political Action Committee, reported only $757 in contributions in a filing made on Monday. Missourians For Patient Care reported no cash contributions in its “8 days before election” report, but disclosed a $450 contribution in a late contribution report.

In Michigan, the two largest marijuana initiative committees have seen a quarter-million dollars in contributions in just the last three days since quarter three figures were filed on Friday. The pro-legalization Coalition to Regulate Marijuana Like Alcohol officially reported a $25,000 donation that had been announced last week by the Drug Policy Alliance. National group New Approach is also a force here, donating an additional $58,650 to the committee over the weekend, bringing their October contributions in the state to over $300,000.

Meanwhile, the largest committee working against the initiative, Healthy and Productive Michigan, is reporting a sizable new contribution of $75,000 from national prohibition organization Smart Approaches to Marijuana, which has already provided over $1 million in cash and in-kind services to the effort. The prohibitionist committee also reported $100,000 from Dow Chemical Corporation. 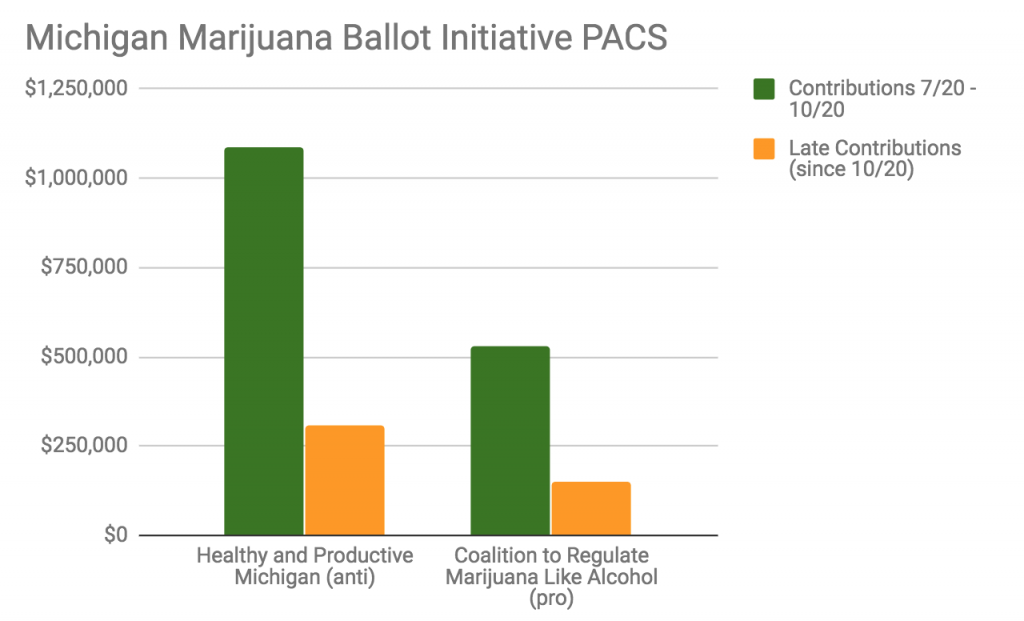 In total, Healthy and Productive Michigan has racked up $310,000 in late contributions since October 20, while the Coalition to Regulate Marijuana Like Alcohol has brought in $151,150. For each committee, these new donations in the last nine days equal about one-third of their total cash previously raised in all of quarter three (August 20 – October 20).

Marijuana Campaign Ads Are Flooding Airwaves Ahead Of The Election