New quarterly campaign finance documents from Missouri medical marijuana ballot committees, covering activity from July 1 to September 30, show some coalescing of support for one of three measures on the ballot, while a recently created committee that opposes all of the medical cannabis options has yet to report any financial support.

Here’s what the fundraising and expenditures for the key committees behind each of the three proposed measures look like: 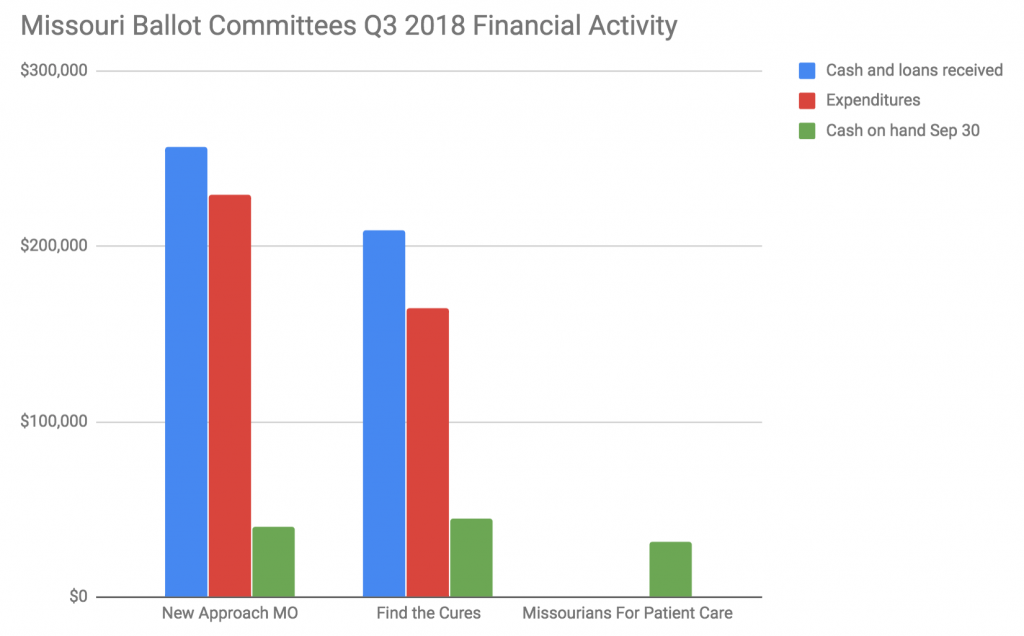 (Note: only those committees with major activity in Q3 are displayed)

Missouri has one of the most confusing sets of marijuana ballot options to ever go before voters in any state, with two proposed constitutional amendments and one proposed statutory measure to choose from. Each option was sponsored by a separate committee that actively attacked the others in the months leading up to qualifying this summer to get on the ballot, with hostile campaign tactics continuing since then—including lawsuits and opposition research into the personal finances of advocates.

In the last few months, two additional organizations entered the fray. One is the only ballot committee that opposes both of the amendments and the proposition. Citizens for SAFE Medicine registered on September 20, and did not report any financial contributions or expenditures on its October 15 report. Judy Brooks, listed as Treasurer of the organization, is also a founder of Jefferson City’s Council For Drug Free Youth.

The other is “Patients Against Bradshaw Amendment Formally Known As Find The Cures Political Action Committee.” The committee, which registered August 27, opposes Amendment 3 and supports Amendment 2. It raised $1,441 cash from five donors, and has spent $447 of that on campaigning.

Its verbose name is a reference to Dr. Brad Bradshaw, the main financial contributor to Find the Cures, a committee that registered in September 2015 to support the measure now designated as Amendment 3. Between October 2017 and June 2018, he provided loans to Find the Cures to the tune of $1.2 million. The committee spent over $800,000 of that to hire a signature collection firm to get on the ballot.

Bradshaw’s measure would, among other things, create a research center that many suspect he intends to run himself. It had already come under fire from Missouri NORML, which backs New Approach Missouri and its preferred proposal, Amendment 2. Find the Cures had already raised $1,556,705 in the first half of 2018 (much of that in the loans from Bradshaw), but started the most recent quarter with just $79 in the bank. From July through September, the committee took in another $209,111, with $186,121 of that in the form of additional loans from Bradshaw. It spent $164,739 on advertising and campaign staff, leaving $44,451 cash on hand for the remaining weeks before the election.

Under Amendment 2, doctors would be allowed to recommend medical cannabis for any condition they feel it is needed. Registered patients and caregivers would be permitted to grow up to six marijuana plants and purchase up to four ounces from dispensaries per month. Medical cannabis sales at dispensaries would be taxed at four percent. As previously reported by Marijuana Moment, the St. Louis chapter of the NAACP, Freedom Incorporated and the St. Louis American newspaper support Amendment 2. It also recently garnered an endorsement from the St. Louis Post-Dispatch.

New Approach Missouri was the most active committee in terms of continuing to raise and spend funds in quarter three of 2018. The group, which had already raised $1,057,263 for the election, took in another $256,924 cash and $15,368 worth of in-kind contributions. They spent $229,122 in the quarter, for events, legal fees, database management, media creation and public affairs in support of Amendment 2. One employee has been paid a total of $116,180 over the course of the campaign. They had $39,878 in the bank at the end of September.

Long-time political action committee Show-Me Cannabis Regulation, which has been around for seven years, had little activity last quarter, bringing in $350 and spending $72, leaving $2,250 on hand. It has however seemingly thrown its support behind New Approach Missouri, providing $5,000 in in-kind support to the committee.

Here’s a chart using a logarithmic scale that includes more of the committees, even those with relatively paltry finances: 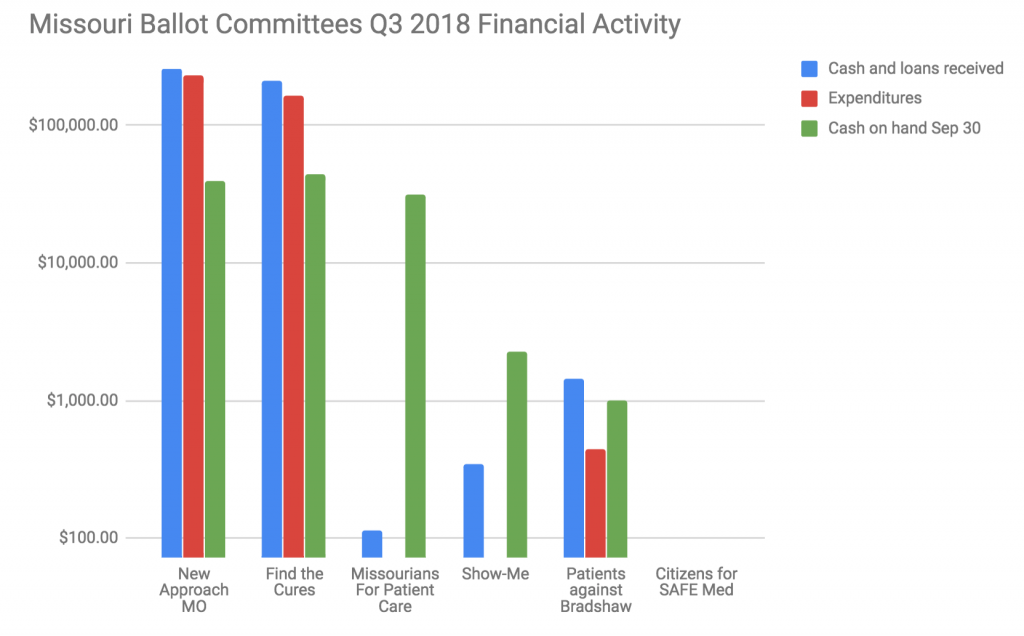 (Note: scale is logarithmic in order to depict smaller committees)

Missourians for Patient Care, which supports Proposition C, had little money activity in the most recent reporting period, suggesting that it is perhaps stepping back from active campaigning at this point. The group had raised a whopping $1,393,360 in 2018, but had only $31,077 left on hand at the beginning of July. In the last three months, it brought in $115 and reported no expenses.

On Election Day, we will see whether the millions of dollars spent result in Missouri voters enacting one of more of the cannabis ballot proposals.

Canadian Lawmaker Vapes Marijuana And Doesn’t Care What Anyone Thinks