Montana activists behind a marijuana legalization initiative are being backed by a uniquely “Big Sky Country” coalition: environmental conservation groups.

The state—widely known for its public lands and parks that attract tourists from across the country—would see a significant influx of revenue for environmental conservation programs from cannabis taxes if the legalization measure passes in November. Half of the public revenue from marijuana sales would be earmarked for such purposes.

“All Montanans share the values of open space, as Montanans we collectively own and steward some of the most special places on earth. We are in fact, the Last Best Place, and that’s a central part of our identity as Montanans,” Pepper Petersen, political director for New Approach Montana, told Marijuana Moment.

“The allocations in I-190 reflect our values as Montanans and you see that in the initiative,” he said. “Montanans know that marijuana revenue should be invested wisely, and our public lands in Montana are a great investment.”

The group said in an op-ed published in The Missoulian newspaper on Sunday that there is currently $60 million in “unmet conservation needs in Montana” for services such as “funding for landowners who want to offer access for hunting and fishing.” Legalizing cannabis could help fill that gap, the coalition said.

“In order to continue to offer Montanans and our millions of guests an experience worth coming back for, we need to invest in our public lands,” PLC, which also includes Wild Montana Action Fund and the Trust for Public Land, wrote. “A vote for 118 and 190 is a vote to maintain and create trails, protect land for wildlife, and fund our state parks.”

The new coalition’s website says that legalization “would provide more than $18 million per year to benefit our public lands; both maintaining current access and opening up new opportunities for recreation.”

“These additional funds would help to address the state’s backlog of repairs to campgrounds, trails, wildlife habitat, opening access and increasing maintenance on our public lands,” the groups said. 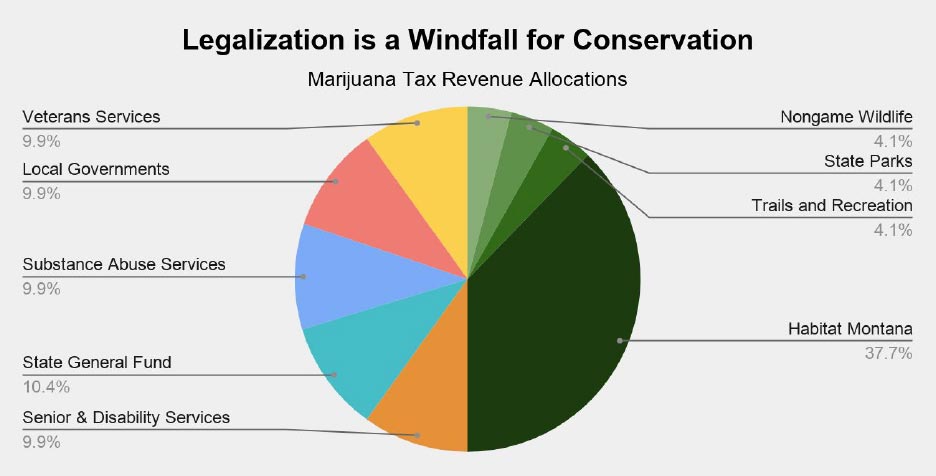 Interestingly, the campaign is also making the case that legalizing federally illegal cannabis on the state level will help open up access to additional federal funding.

“The Land and Water Conservation fund is the largest piece of federal funding for our public lands. Now that the LWCF is fully and permanently funded, there are $900 million federal dollars per year that can be leveraged with matching state resources,” the coalition website says. “Tax revenue from I-190 could allow Montana to access more of this funding through matched federal grants. Montana should take every opportunity to use this money, and I-190 represents a golden opportunity to do so.”

There will be two separate marijuana measures on the state’s November ballot.

One initiative, a statutory change, would create a system of legal cannabis access for adult-use. A separate constitutional amendment would ensure only those 21 and older can participate in the market.

If the statutory measure is approved by voters, possessing up to an ounce of cannabis would be allowed, and people could cultivate up to four plants and four seedlings at home.

The Montana Department of Revenue would be in charge of regulating the legal industry and would issue business licenses by January 1, 2022. Existing medical cannabis businesses would be first in line to enter the adult-use market.

There would be a 20 percent sales tax on recreational marijuana, while the tax on medical cannabis products would be reduced from two to one percent. Besides public land funding, those tax dollars would also go toward veteran services, substance misuse treatment, health care, local governments that allow cannabis businesses and the state general fund.

“We are excited to have the support of our neighbors and friends from the PLC,” Petersen said. “Countless Montanans will continue to enjoy this special place because of the funding I-190 is creating and because of the hard work of the folks like those who make up the Public Lands Coalition who believe and invest in Montana’s public lands and waters.”

For the current cycle, New Approach Montana submitted their petitions for the cannabis initiatives in June. That came after they initially suspended signature gathering activities amidst the coronavirus pandemic, which they later relaunched with social distancing measures in place.

In July, the group announced that data from county officials indicated they would make the ballot. And in August, state officials officially qualified the measures.