A medical marijuana legalization initiative that will appear on Mississippi’s November ballot is being targeted by two medical associations that are pushing voters to reject the policy change.

With weeks left until the vote, the Mississippi State Medical Association (MSMA) and American Medical Association (AMA) are circulating a sample ballot that instructs voters on how to reject the activist-led measure. For supporters and opponents alike, the way the ballot is structured can be confusing—a product of the legislature approving an alternative that appears alongside Initiative 65.

“The purpose is to defeat Initiative 65. Initiative 65A will allow the legislature to enact changes to the law, which would not be possible with Initiative 65,” the opposition campaign document states. “MSMA is asking for you to join us in educating and encouraging our population to vote against Initiative 65.” 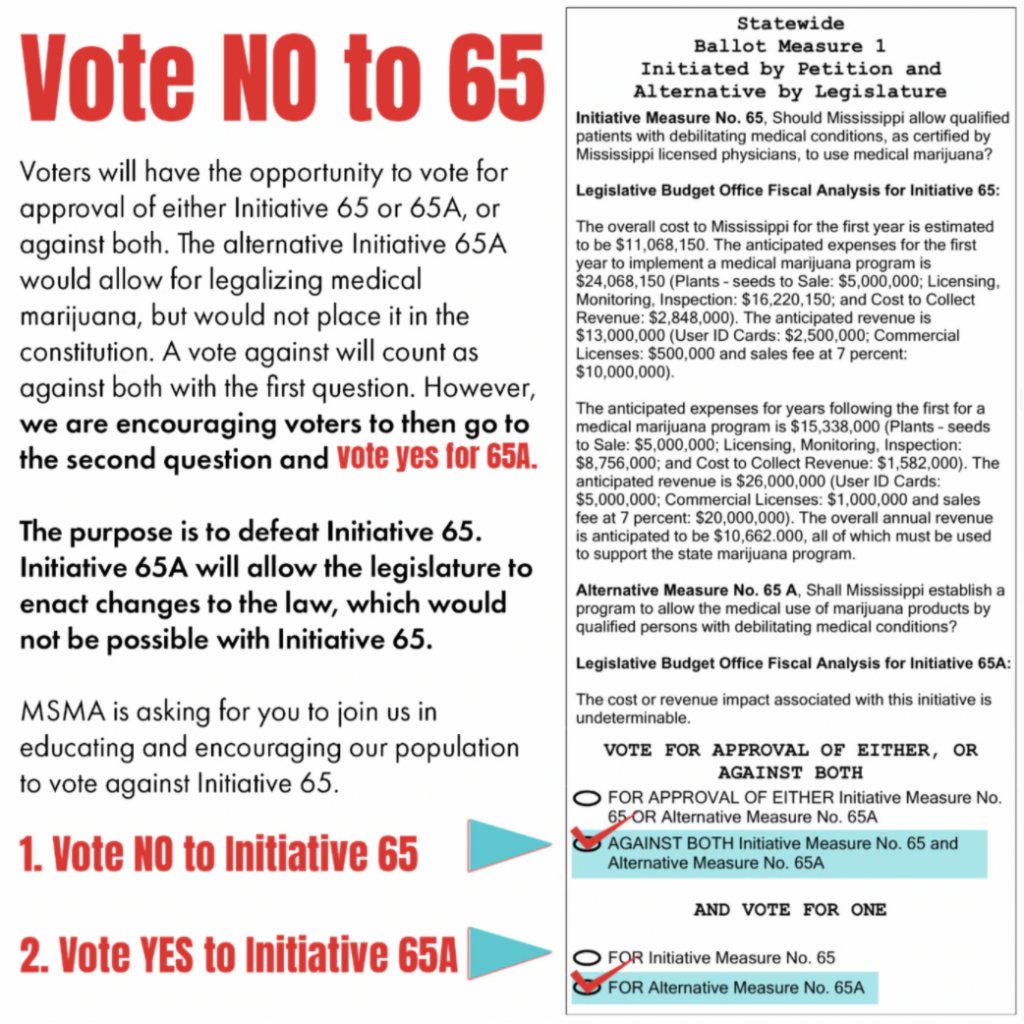 This marks the latest obstacle that reform advocates are facing as they work to inform the electorate about how to fill out the ballot to pass their proposal. Despite polls that show support for medical cannabis legalization at 81 percent in Mississippi, opponents aren’t acquiescing to public opinion.

MSMA President Mark Horne told WLBT-TV last week that the organization was asked to review the initiative and that “it was immediately clear that this is an effort focused on generating profits for an industry that has no ties to the medical or health care community in Mississippi.”

But according to Jamie Grantham, communications director for Mississippians for Compassionate Care (MCC), that talking point has only recently been aired and the campaign didn’t receive that feedback until MSMA mounted this opposition push. She told Marijuana Moment on Monday that the group’s steering committee is composed of several physicians who also had a hand in drafting the measure’s language—and that includes doctors who are part of MSMA.

“Ultimately, it boils down to patients being able to have access to this through their physician. They need to be able to have that conversation with them,” she said. “If certain physicians don’t see a benefit to that, that’s fine. But lots of other physicians do, and that’s evidenced undeniably in the 34 other states with medical marijuana programs where patients are receiving relief.”

AMA President Susan Bailey argued that “amending a state constitution to legalize an unproven drug is the wrong approach,” adding that there are concerns about youth exposure and impaired driving.

That said, a scientific journal published by AMA has printed research showing the advantages of broad marijuana legalization, however, with one recent study showing that people in states where recreational cannabis is legal were significantly less likely to experience vaping-related lung injuries than those in states where it is prohibited.

The organization has long maintained an opposition to legalization but has called for a review of marijuana’s restrictive federal Schedule I status.

Marijuana Moment reached out to AMA for comment, but a representative did not respond by the time of publication.

If the Mississippi campaign’s measure passes, it would allow patients with debilitating medical issues to legally obtain marijuana after getting a doctor’s recommendation. The proposal includes 22 qualifying conditions such as cancer, chronic pain and post-traumatic stress disorder, and patients would be allowed to possess up to 2.5 ounces of marijuana per 14-day period.

In June, lawmakers introduced yet another medical cannabis alternative resolution that would’ve posed an additional threat to the activist-driven reform initiative. But, to advocates’ relief, the legislation didn’t advance before lawmakers went home for the summer.