Medical marijuana is on the ballot in Mississippi. The problem for advocates, however, is that the way the ballot is constructed could make the issue seriously confusing to voters.

Shortly after the campaign officially qualified their initiative for the ballot, lawmakers approved legislation to place an alternate legalization measure before voters. Advocates say the competing ballot question is deliberately vague and could lead to a significantly more limited cannabis system if it passed over the activist-led proposal.

The result of the inclusion of an alternative is a convoluted ballot that requires voters to answer a two-step set of questions on cannabis: first, they must fill out a bubble to “vote for approval of either, or against both” measures. Then they’re prompted to “vote for one” and given the choice of the activist-driven Initiative 65 and lawmakers’ alternative measure 65A.

Immediately, there’s a logistical question. For those who voted against approving either, the use of the word “and” in the next question might lead some to think they have to select one. And if they did make a selection despite their opposition, it’s unclear whether those votes would still be counted. Alternatively, some voters who are trying to fill out their ballots quickly may skip the first question and go right to filling out the bubble for Measure 65 and then have their support discounted.

The difference in language preceding the legalization options could also cause problems. Both measures were analyzed by the state’s Legislative Budget Office, and because the activist campaign’s is more detailed, officials were able to come up with estimated costs and revenue. A big block of text goes over those numbers prior to the question itself, with costs getting more prominent billing than revenue. In the first year of implementation, the measure will cost more than it will bring in—a possible roadblock to supporting the measure for some voters—though in subsequent years there’s anticipated to be a $10.6 million annual net gain.

But for the legislature’s alternative, the analysts simply said the “cost or revenue impact associated with this initiative is undeterminable.”

Via Mississippi Secretary of State.

While it’s possible some voters might be inclined to choose the ostensibly simpler version, MCC’s Grantham sees it differently. In a state that strongly conservative, voters care about the financial impact of reform—and she says the lack of an analysis for the alternative will demonstrate to residents that it’s an unserious proposal.

But Grantham recognizes that the ballot isn’t the straightforward “yes/no” on the activist-driven initiative that they’d hoped for.

“That’s been our concern the entire time,” she told Marijuana Moment. “That’s really the whole point with the legislature putting 65A on the ballot is that they’ve never put forth a program legislatively. They’ve blocked more than 20 proposed bills over the last few decades to do so legislatively. And then as soon as Initiative 65 qualifies, the put 65A on the ballot in order to confuse voters and dilute the vote so that neither measure meet the required amount of votes to pass.”

The ballot initiative law allowing for an alternative is “a backdoor for the legislature” to undermine the will of the voters and shut down reform they disagree with, she argued. “These are just people that don’t want medical marijuana. None of their arguments have any foundation, they really don’t.”

Matthew Schwiech, deputy director of the Marijuana Policy Project, told Marijuana Moment that the ballot “reflects our expectations, and it’s going to be very important for the campaign to explain the process to voters and to make the case for Initiative 65.”

He also agreed with Grantham about the fiscal language, stating that “when a voter reads the fiscal analysis, it will be fairly easy to understand. I think it’s written in a way that avoids technical jargon. And I think that it is an advantage to give clarity to voters on the fiscal impact.”

To combat any potential confusions for voters when they head to the polls, MCC is stepping up educational outreach, with activists traveling throughout the state to talk about the need for the policy change and how to navigate the ballot. They’re also sharing information across social media, including a comparison chart breaking down the differences between the versions. 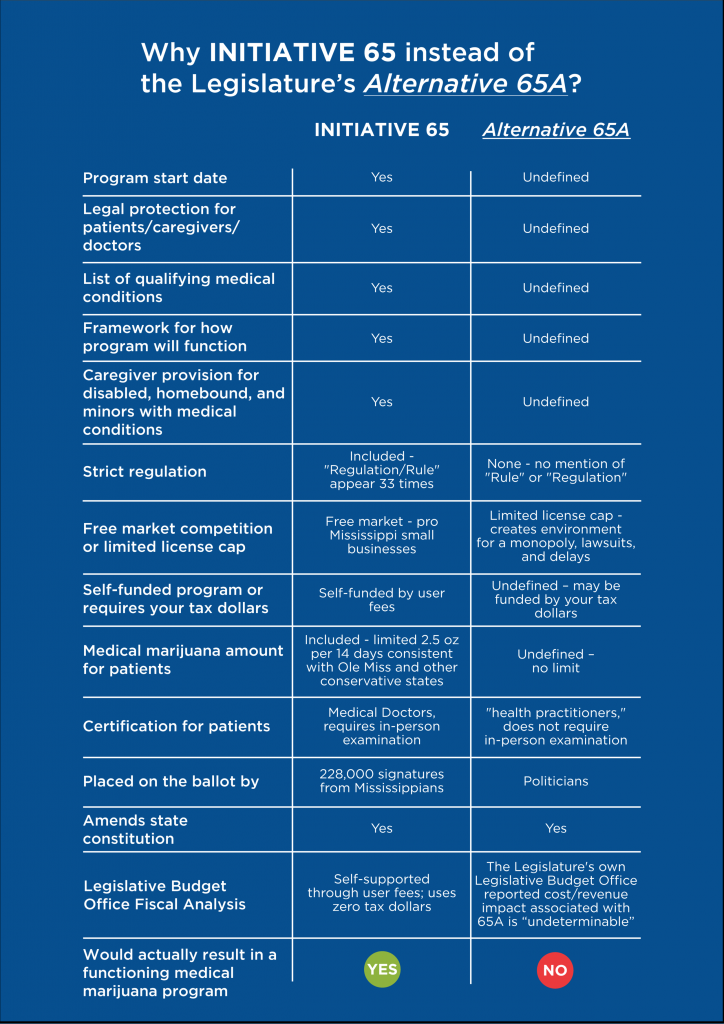 But with only weeks left until the November election, time is of the essence if the campaign hopes to make it clear to voters across the state how to fill out the jumbled ballot.

Schweich said he’s not especially concerned about potential voter drop out due to confusion over the ballot language and setup.

“Ballot drop off is impacted by a number of factors. The length of the ballot overall, the placement of the ballot question itself and the familiarity that voters have with ballot initiatives—some states have ballot initiatives often, some states, it’s less frequent. So it’s difficult to say what the drop off might be in Mississippi,” he said. “I will say that, looking at the ballot, there’s only two pages of candidates and then you get straight to the initiatives. I think the layout with the three measures is fairly clear.”

What the campaign has on its side, at least, is clear voter support based on recent polling. Eighty-one percent of respondents said in a recently released poll that they support medical cannabis legalization generally, and the activist-led initiative is significantly more popular than the competing alternative.

If the campaign’s measure passes, it would allow patients with debilitating medical issues to legally obtain marijuana after getting a doctor’s recommendation. The proposal includes 22 qualifying conditions such as cancer, chronic pain and post-traumatic stress disorder, and patients would be allowed to possess up to 2.5 ounces of marijuana per 14-day period.