Delaware could see tens of millions of dollars in tax revenue every year if it moves to legalize marijuana, a top statewide elected official said in a new report released on Monday.

The analysis from State Auditor Kathy McGuiness (D) found that Delaware could generate upwards of $43 million annually in revenue from taxing and regulating cannabis. The legal market could also create more than 1,000 new jobs over five years if the policy is enacted, according to the report.

“Forty-three million dollars in state tax revenue would be a boon to Delaware’s coffers,” McGuiness said in a press release. “That money could be used to plug budget holes in the short term and would continue to provide revenue for all kinds of important initiatives in the long term.”

Delaware is potentially missing out on more than $43 million in annual tax revenue by not legalizing recreational marijuana.
See how I got to that figure here:https://t.co/3xj5iOF0w4

To come up with these estimates, the state auditor’s office looked at publicly available data and concluded that a regulated marijuana industry would grow to be a $215 million enterprise. And assuming marijuana is taxed at 20 percent, that would translate into $43 million in tax revenue.

“While our report focuses on the economic implications of legalization, such a move would surely be a positive step forward in reforming our criminal justice system,” the report states. “However, choosing instead to allow the sale of marijuana on the black market to go unregulated will mean Delaware will be left behind as other states realize the important economic, public health and social equity advantages that legalization provides. Now is the time for Delaware to legalize marijuana.”

“It’s our view that the action taken by other states to legalize the recreational sale of marijuana puts Delaware at a competitive disadvantage if we continue to ignore the economic potential that this could yield,” it continues. “No Delaware taxpayer wants to see cuts in essential services nor see the door closed to economic growth and good jobs when revenue options like this exist.” 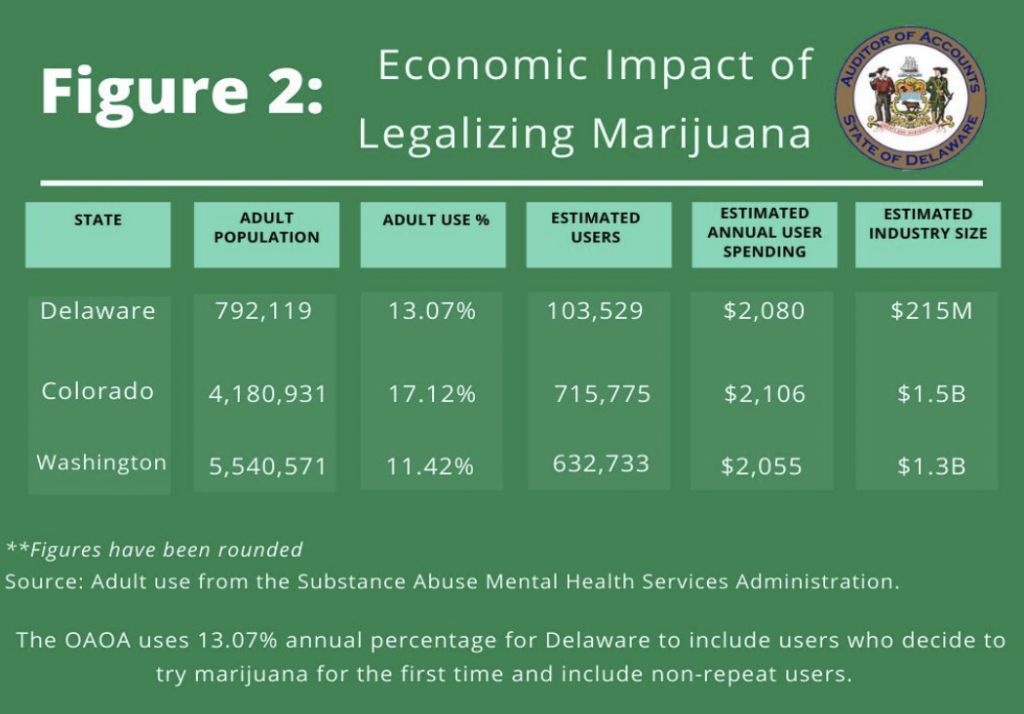 Legalizing advocates welcomed the auditor’s report as more evidence that lawmakers should enact the policy change.

“The General Assembly should seriously consider legalizing and regulating cannabis for adults this year. Delaware’s neighbor, New Jersey, and 14 other states have already moved forward with this more sensible policy,” Olivia Naugle, a legislative analyst with the Marijuana Policy Project, told Marijuana Moment. “The longer Delaware waits, the state will continue to miss out on a new source of jobs and revenue. It is past time to end prohibition in the First State.”

“This has been the experience in other jurisdictions that have enacted legalization—none of which have ever repealed or even seriously considered rolling back their policies,” he said. “That is because these legalization laws are operating largely as voters and politicians intended and in a manner that the public finds preferable to the failed policies associated with criminal prohibition.”

The new state report also notes growing public support for legalization and the bipartisan nature of that trend.

“Statistics show that public opinion on allowing recreational marijuana for adult use has changed dramatically in the last few years, with a majority of Delawareans now supporting it,” McGuiness said. “The prohibition on marijuana has only led to a robust black market, which could be minimized by responsible and thoughtful legalization.”

The auditor’s estimate for job creation is based on an analysis completed in Virginia last year, which was required as part of a cannabis decriminalization bill that passed and is also being used to inform the state’s approach to adult-use legalization.

“Regulation is a key toward controlling commercially legalized marijuana for production, sale and consumption,” the report concludes. “Legalization done right in our view would allow Delaware to establish a policy framework to suppress the black market, curb usage through regulation for minors and collect revenue on a market demand that seems only to be increasing. It would also provide a new revenue stream and new potential for economic growth.”

“Each year that we fail to capitalize on this opportunity means more money could flow to neighboring states instead of being invested here. It is time Delaware pursue legalizing marijuana,” it says.

In 2019, a Delaware House committee approved a bill to legalize marijuana for adult use in the state, but it did not advance before the end of the session. Rep. Ed Osienski (D), sponsor of the measure, plans to reintroduced it in 2021.

Legalization legislation previously received majority support on the House floor in 2018, but procedural rules required a supermajority for it to pass and it didn’t meet that threshold.

While Gov. John Carney (D) is not in favor of legalization, he did sign two pieces of marijuana expungement legislation in recent years. In 2017 and 2018, a state task force met to discuss issues related to legalization, and the governor hosted a series of roundtable meetings about cannabis.

Carney’s predecessor approved a measure to decriminalize simple possession of cannabis in 2015.

As in other states without legalization on the books in the Northeast, regional pressures could come into play in 2021. Delaware borders New Jersey, where voters opted to legalize in November, as well as two other states where cannabis reform could shortly advance: Pennsylvania and Maryland.

“With neighboring states either legalizing it or considering doing so, taking action now is the only way to prevent Delaware from being at a competitive disadvantage in the future,” McGuiness said. “The First State cannot and should not be the last state to approve legalization in the region.”

Separately, in an effort to mitigate the spread of coronavirus, Delaware regulators announced in April that medical cannabis patients could access delivery services under an emergency program.

Read the new report on marijuana tax revenue in Delaware below: