Not only are marijuana businesses excluded from federal coronavirus relief funds, but medical cannabis dispensaries in New York are also ineligible for a new COVID-19 loan program that the state is offering.

“The working capital loans are timed to support businesses and organizations as they proceed to reopen and have upfront expenses to comply with guidelines (e.g., inventory, marketing, refitting for new social distancing guidelines) under the New York Forward Plan,” a description of the program states. 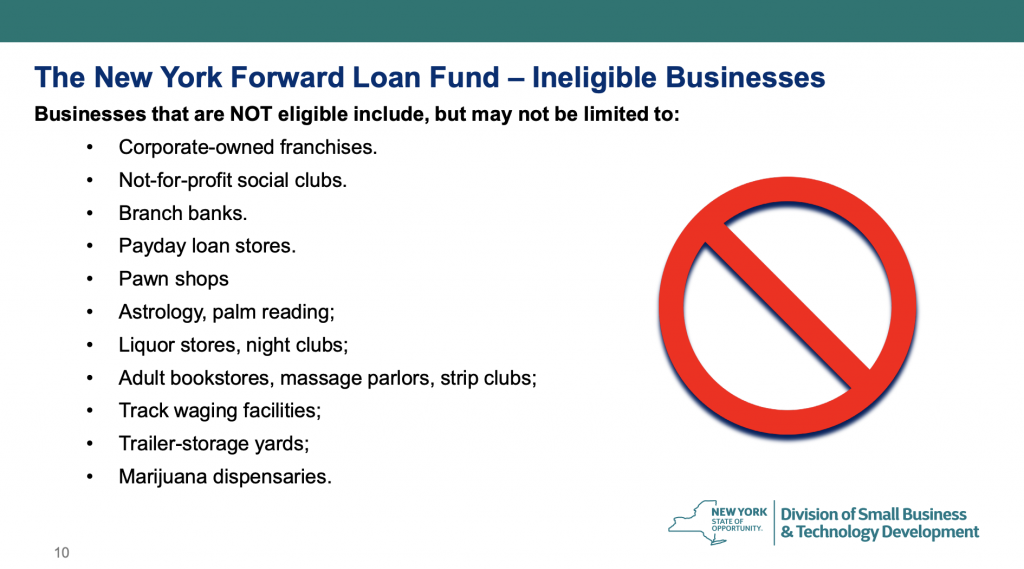 This eligibility requirement restrictions come despite the fact that most states, including New York, have deemed cannabis businesses as essential services that can continue to operate during the pandemic.

For the industry in the Empire State, the loan exclusion is another gut punch in a crisis. There have been widespread calls from stakeholders, advocates and legislatures to provide the market with equitable relief from the federal Small Business Administration and, while that so far has not panned out, there’s been hope that states could help fill the gap.

“Given that cannabis businesses are ineligible for federal relief, it is unconscionable for the state of New York to deny them access to state-based relief efforts,” Morgan Fox, media relations director for the National Cannabis Industry Association, told Marijuana Moment. “These businesses have been going above and beyond to provide continuous healthcare, protect jobs, and generate revenue for the state under terrible conditions just like other essential services.”

“Leaving them in the lurch like this is a tremendous disservice to the people who risked their health to provide medical cannabis to the people that need it, and will stunt the ability of the industry to recover and grow at a time when the economy needs it most,” he said.

Katie Neer, chair of the New York Medical Cannabis Industry Association and director of government relations for Acreage Holdings, told Marijuana Moment that it’s “unfortunate that medical cannabis operators, which are licensed and regulated in New York, and help thousands of patients manage a wide range of ailments, conditions, and illnesses, continue to be lumped in with other so-called ‘sin’ businesses, like pay-day loan stores, massage parlors, and strip clubs.”

“The reality is that New York’s medical cannabis program, established by the governor and Legislature in 2014, is one of the most restrictive in the nation,” she said. “As a result, the industry was struggling prior to the pandemic, even as it was deemed ‘essential’ and continues to serve patients throughout the crisis.”

“While we are eager to participate in the economic recovery at both the state and federal levels, accessing capital has long been a struggle for cannabis operators due to cannabis remaining a federally illegal schedule I drug. We applaud the state’s $100 million New York Forward Loan fund to support small businesses, but we regret not being able to participate due to inconsistencies between state and federal law. To that end, we urge the US Senate to include the SAFE Banking Act in the next federal aid package, which would improve the cannabis industry’s access to capital and ensure that state administered efforts like this one can include state-legal cannabis operators.”

It’s possible that because this loan program is the product of a private-public partnership involving several large national banks, the cannabis exclusion could be related to perceived risks associated with providing financial services to a federally illicit market.

While New York might not be extending state-level relief to cannabis businesses, lawmakers in Massachusetts are actively considering legislation that would establish a coronavirus relief program for marijuana firms and other companies that are left out of federal aid.

In the meantime, at the federal level, the House passed a COVID-19 package that does contain language that would protect banks that service cannabis businesses from being penalized by federal regulators. Advocates argue that this would mitigate the spread of the virus in a heavily cash-based industry.

New York Gov. Andrew Cuomo (D) was recently asked why the state hasn’t legalized cannabis for adult use as a means to generate much-needed tax revenue during the pandemic. He said it’s a policy change he expects will happen, but it’s a “complicated issue and it has to be done in a comprehensive way.”