As bills to decriminalize marijuana languish in the Pennsylvania legislature, a new poll finds that a majority of voters in the state support an even more expansive proposal to end criminalization of all currently illicit drugs.

The survey, conducted by Data for Progress and released on Thursday, found that 60 percent of voters are in favor of having their district attorneys eliminate “criminal penalties for simple possession of a controlled substance.” 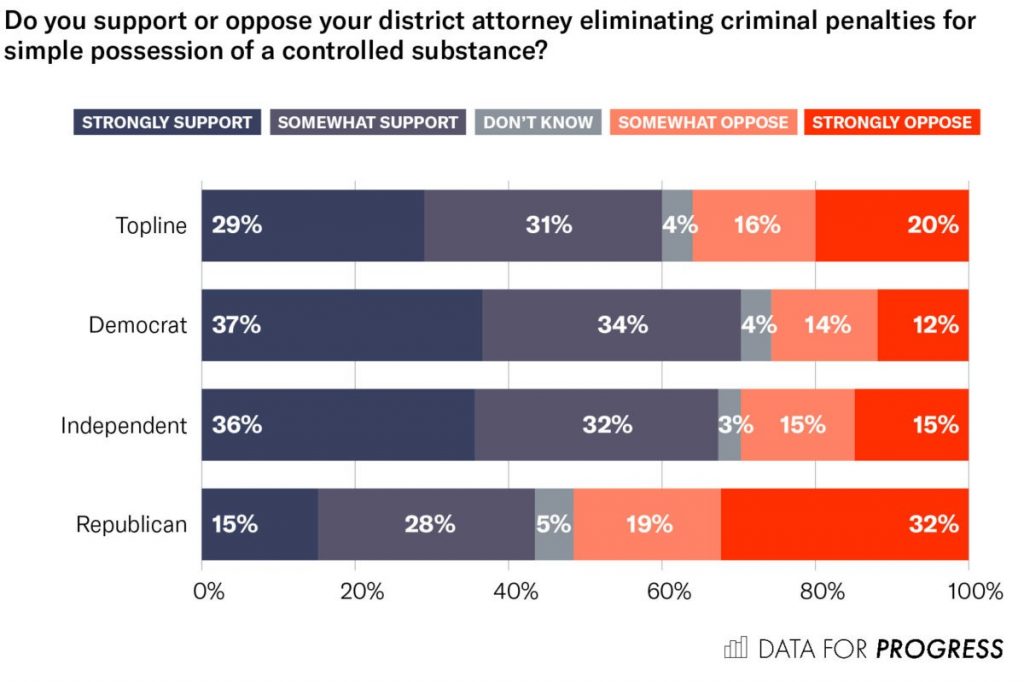 Yet despite that support, two bills to decriminalize cannabis alone that were introduced in the GOP-controlled House and Senate in January have yet to receive hearings in the committees to which they were referred.

The Pennsylvania poll, which was first reported by The Appeal and pegged to Tuesday’s district attorney elections in 17 counties, involved interviews with 632 likely voters from April 30-May 5.

Support for decriminalization is strongest among Democrats, with 71 percent on board. Sixty-eight percent of independents back the policy reform, while only 43 percent of Republicans agree.

But again, the reform has failed to advance, with one Democrat-led bill having simply been referred to committee.

That said, a bipartisan Senate duo is currently crafting legislation to legalize cannabis across the commonwealth. Sens. Dan Laughlin (R) and Sharif Street (D) announced some details of the proposal earlier this year, but the bill has yet to be formally introduced.

Outside the legislature, Gov. Tom Wolf (D) said earlier this year that marijuana legalization was a priority as he negotiated the annual budget with lawmakers, however, his formal spending request doesn’t contain legislative language to actually accomplish the cannabis policy change.

The governor has repeatedly called for legalization and pressured the Republican-controlled legislature to pursue the reform since coming out in favor of the policy in 2019. Shortly after he did that, a lawmaker filed a bill to legalize marijuana through a state-run model.

Lt. Gov. John Fetterman (D), meanwhile, has been vocal in his support of legalization.

Fetterman, who is running for U.S. Senate, previously led a listening tour across the state to solicit public input on legalization. He’s credited that effort with helping to move the governor toward embracing comprehensive reform. The lieutenant governor even festooned his Capitol office with marijuana-themed decor.

The COVID-19 pandemic, and its financial fallout, have also given lawmakers a reason to consider legalization, which make tens of millions of dollars in tax revenue. A majority of Senate Democrats last July sent the governor a letter arguing that legislators should pursue the policy change in order to make up for revenue loss resulting pandemic, but it’s not clear whether legalization could pass the state’s GOP-controlled Senate.