As bills to legalize marijuana in Connecticut move through the legislature, a new poll finds that the reform has strong support among residents.

The survey from Sacred Heart University (SHU), released on Tuesday, found that about 66 percent of people in the state favor legalizing cannabis for adult use, while 27 percent are opposed.

If the policy change is enacted, 62 percent said those with prior marijuana convictions should have their records expunged. 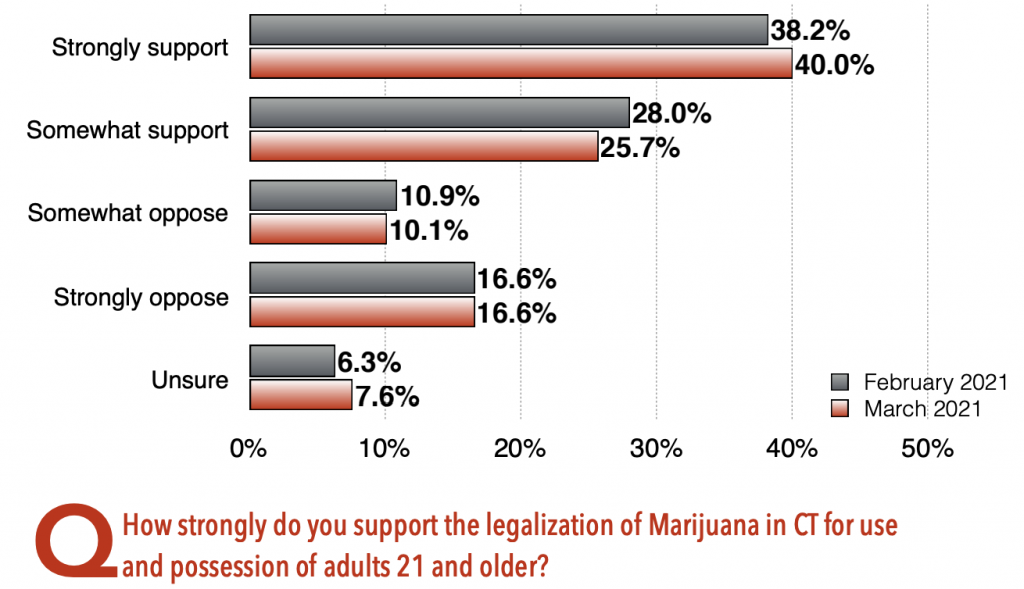 Younger people and those who identify as Democrats were more likely to back ending prohibition, compared to those 65 and older or Republicans.

Further, the poll asked about perceived harms of cannabis, and 77 percent said they felt the plant carried “fewer effects” or comparable effects as alcohol. About 72 percent drew the same contrast between marijuana and other drugs such as heroin, amphetamines and prescription painkillers.

These figures are largely consistent with a previous poll that SHU conducted in February.

And like that prior survey, nearly half of Connecticut residents again expressed that they still believe that there are potential negative public safety implications of legalization, even if they support the policy. In this case, 48 percent said they agree that allowing recreational cannabis would lead to a “significant” increase in impaired driving.

Two in five respondents said they agree that marijuana is a gateway to other drugs. The poll involved interviews with 1,000 residents from March 23-31.

But while these figures largely align with the last SHU survey, one thing that has changed is that reform legislation has started to advance in the legislature, including a bill being backed by the governor.

The Judiciary Committee approved Gov. Ned Lamont’s (D) proposal, which was amended to more comprehensively address social equity issues, last week. That said, legislative leaders have indicated that the bill is fluid and will likely see additional revisions down the road.

A competing legalization measure from Rep. Robyn Porter (D) was approved in the Labor and Public Employees Committee last month.

One amendment that was adopted to the governor’s bill would provide for the free erasure of past marijuana convictions for possession or sales of up to four ounces of cannabis or six mature plants—a policy that is evidently backed by most residents in the state.

Lamont, who convened an informal work group in recent months to make recommendations on the policy change, initially described his legalization plan as a “comprehensive framework for the cultivation, manufacture, sale, possession, use, and taxation of cannabis that prioritizes public health, public safety, and social justice.”

Majority Leader Jason Rojas (D) said “in principle, equity is important to both the administration and the legislature, and we’re going to work through those details.”

To that end, the majority leader said that working groups have been formed in the Democratic caucuses of the legislature to go through the governor’s proposal and the committee-approved reform bill.

In February, a Lamont administration official stressed during a hearing in the House Judiciary Committee that Lamont’s proposal it is “not a final bill,” and they want activists “at the table” to further inform the legislation.

The legislature has considered legalization proposals on several occasions in recent years, including a bill that Democrats introduced last year on the governor’s behalf. Those bills stalled, however.

Ritter said in November that legalization in the state is “inevitable.” He added later that month that “I think it’s got a 50–50 chance of passing [in 2021], and I think you should have a vote regardless.” The governor said in an interview earlier this year that he puts the odds of his legislation passing at “60-40 percent chance.”

Should that effort fail, the speaker said he will move to put a constitutional question on the state’s 2022 ballot that would leave the matter to voters. Lamont made similar remarks last week.

He also said that legalization in Connecticut could potentially reduce the spread of COVID-19 by limiting out-of-state trips to purchase legal cannabis in neighboring states such as Massachusetts and New Jersey.