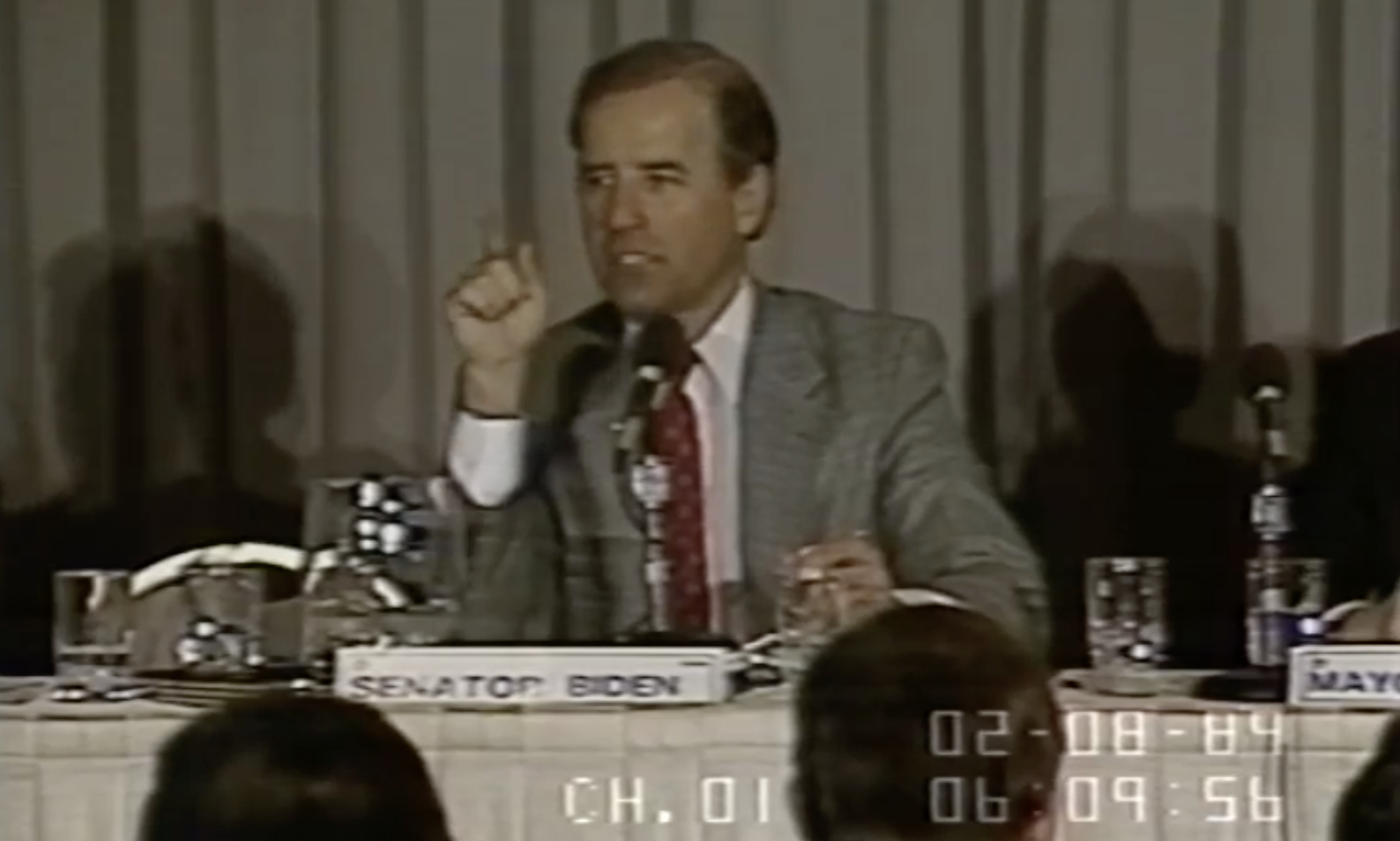 Before he was a vice president, Joe Biden was a “tough on crime” senator on a mission to end the “scourge” of drugs.

Part of that mission, he said in 1989, could involve governors armed with flamethrowers, incinerating illicit marijuana grows along the mountainsides of their states.

At least, that’s what he predicted would happen by 1995, as the domestic production of cannabis became competitive with international trafficking. Biden made the comments at a U.S. Conference of Mayors event, where he was pressed on the limitations on the use of military resources to combat drug crimes.

A Los Angeles-area mayor complained to the then-senator that the Drug Enforcement Administration is able to identify planes suspected of carrying drugs but the military doesn’t intervene and force the plane down. He said the government doesn’t just need a drug czar—a Cabinet-level position that Biden helped create—but also needs a “supreme allied commander that is going to help construct a battle plan and who is going to give the marching orders.”

If not, the mayor joked, federal dollars should go toward contracting the British Navy to lay siege to the Capitol, burn it down and start building the government all over again.

Biden picked up on the point about trafficking through the airspace and said there’s one thing happening that “you should understand.”

“You know what California’s largest cash crop is agriculturally? Marijuana,” he said. “We are likely to be, by the year 1995, totally self-sufficient,” suggesting that enough cannabis would be grown domestically that there wouldn’t be a need for international trafficking.

“We’re not going to worry about pulling down planes,” he said. “We’re going to have to worry about getting governors to go out in the mountainsides with flamethrowers, with you next to them, dealing with it in their backyards.”

“I understand your frustration,” he said. “It’s incredibly complicated and some of the things, short of burning down the Capitol, I think, are worth considering.”

Earlier in the meeting, Biden expressed frustration with the political rhetoric surrounding the drug war and said Congress can only do so much to eliminate drugs without a strategic plan in place.

“We talk about waging a war on drugs, eliminating drugs in our term if not our lifetime,” he said. “With all due respect to all of you and to those with whom I serve, our terms are not long enough for that to happen. I think it’s about time we stop kidding the American people and our constituents about what we are going to be able to do legislatively in order to end this scourge.”

“The honest truth is we have no drug strategy in America. It does not exist. It has not existed,” he said, adding that’s partly why he pushed to establish a federal drug czar position.

“I am the proud sponsor of, or the shameful father of, about 2,000 pages of tough legislation, all of which has passed under my cosponsorship or sponsorship or leadership on the Senate Judiciary Committee,” he went on to say. “We have enough laws now at the federal level. We need to figure out to make them work. We need to figure out whether any of them are worthwhile.”

Those “tough” pieces of legislation, as of Biden’s 1989 remarks, included measures to increase sentences for certain drug offenses and impose financial penalties on countries that don’t meet drug eradication standards. They would also later include notoriously punitive legislation such as the 1994 Crime Bill, which played a central role in the rise of mass incarceration in the U.S.

While the flamethrower plan isn’t likely to resurface any time soon—as Biden has since come out in support of decriminalization, modest rescheduling and allowing states to set their own cannabis policies—he recently took another page from the past when he explained his opposition to adult-use legalization by saying marijuana may be a gateway to more dangerous drugs.

Days later, after being widely criticized and called out by Sen. Cory Booker (D-NJ) during a Democratic presidential debate over the comments, Biden reversed himself and said evidence doesn’t support the idea that cannabis is a gateway drug.