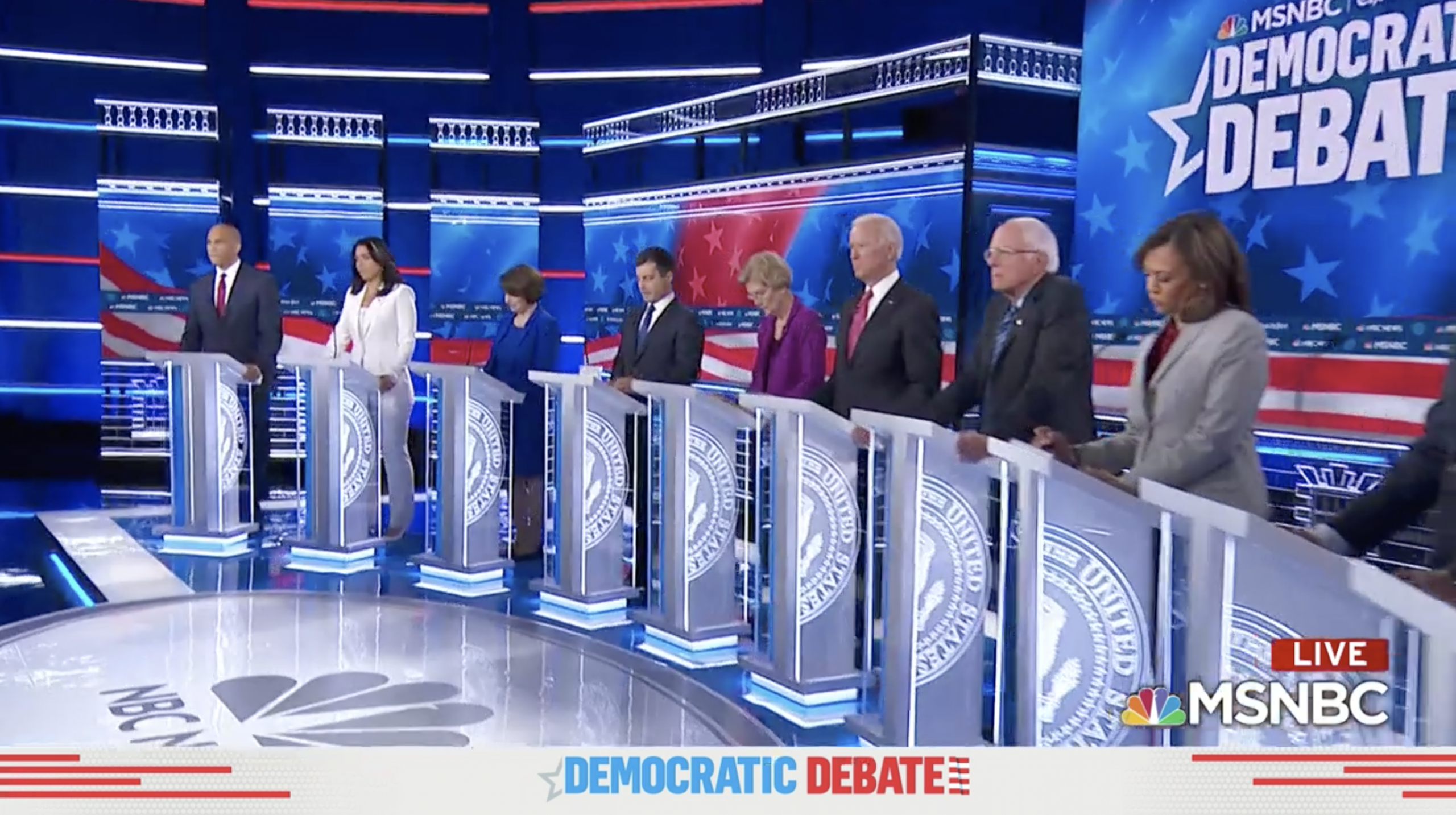 Sen. Cory Booker (D-NJ) blasted former Vice President Joe Biden at the Democratic debate on Wednesday over his recent comments opposing the legalization of marijuana, arguing that the policy stance demonstrates how Biden is out of touch with communities of color.

“This week I hear [Biden] literally say that I don’t think we should legalize marijuana,” Booker said.

The pro-legalization senator, however, went on to peddle a stereotype about cannabis consumers, quipping, “I thought you might’ve been high when you said it.”

RT if you know that marijuana is *already legal* for people who are privileged.

Add your name if you believe it should be for everyone. https://t.co/3dxgr3JFVI

“Marijuana in our country is already legal for privileged people, and the war on drugs has been a war on black and brown people,” the senator said. “There are people in Congress right now that admit to smoking marijuana while there are people—our kids—are in jail right now for those drug crimes.”

Sen. Booker on fmr. VP Biden's recent comments on the legalization of marijuana: "I thought you might have been high when you said it" #DemDebate pic.twitter.com/dQf55njB66

The cannabis policy attack comes less than a week after Biden sparked controversy after stating that he’s not in support of legalizing marijuana because “there’s not nearly been enough evidence that has been acquired as to whether or not it is a gateway drug.”

“It’s a debate, and I want a lot more before I legalize it nationally,” Biden said at the time. “I want to make sure we know a lot more about the science behind it.”

In response to Booker’s criticism at the debate, the former vice president—who played a key role in enacting harsh drug policies during his time as a senator—said that “I think that we should decriminalize marijuana, period, and I think anyone who has a record should be let out of jail, their records expunged, can be zeroed out.”

“But I do think it makes sense, based on data, that we should study what the long-term effects are for use of marijuana,” he said. “That’s all it is.”

Biden also offered a defense on Twitter, outlining his policy positions, which include a modest reclassification of the drug under federal law.

Over the last few days, there has been a lot of misinformation on where Joe Biden stands when it comes to our marijuana laws. Read the facts below. #DemDebate pic.twitter.com/JEgMfuBgLQ

Yang, for his part, did not address Biden’s “gateway drug” comments at the debate, but he told CNN in an interview that he expected the former vice president to eventually come around on marijuana reform.

Drug policy reform also came up earlier in the MSNBC and Washington Post debate. Rep. Tulsi Gabbard (D-HI) said it’s “important that we set the record straight and correct the racial injustices that exist in a very institutional way in our country, beginning with things that have to do with our criminal justice system—predominantly, the failed war on drugs that has been continuing to be waged in this country, has disproportionately impacted people of color and people in poverty.”

We must correct the institutional racial injustices in our country that disproportionately impact people of color & people in poverty. As president I will end the failed war on drugs & end the money bail system to correct injustices of the past – TULSI2020 #TulsiGabbard pic.twitter.com/Etbvbrnhpw

She added that the country must “[o]verhaul our criminal justice system, working in a bipartisan way to do things like end the failed war on drugs, end the money bail system.”

The congresswoman, who knocked Harris in a previous debate over her role in prosecuting people over cannabis, also argued later in the event that South Bend, Indiana Mayor Pete Buttigieg demonstrated his “inexperience in national security and foreign policy” when he recently indicated he was open to deploying U.S. troops to combat drug cartel violence in Mexico.

Tulsi fact checks Mayor Pete on careless statements about our military: "You were asked directly whether you would send our troops to Mexico to fight cartels and your answer was yes. The fact checkers can check this out." – TULSI2020 #TulsiGabbard pic.twitter.com/8v0GtXSJIc

The mayor pushed back, contending that Gabbard took his “remarks out of context” in an “outlandish” way and that he was simply stating that he would be willing to continue national security cooperation between the countries.