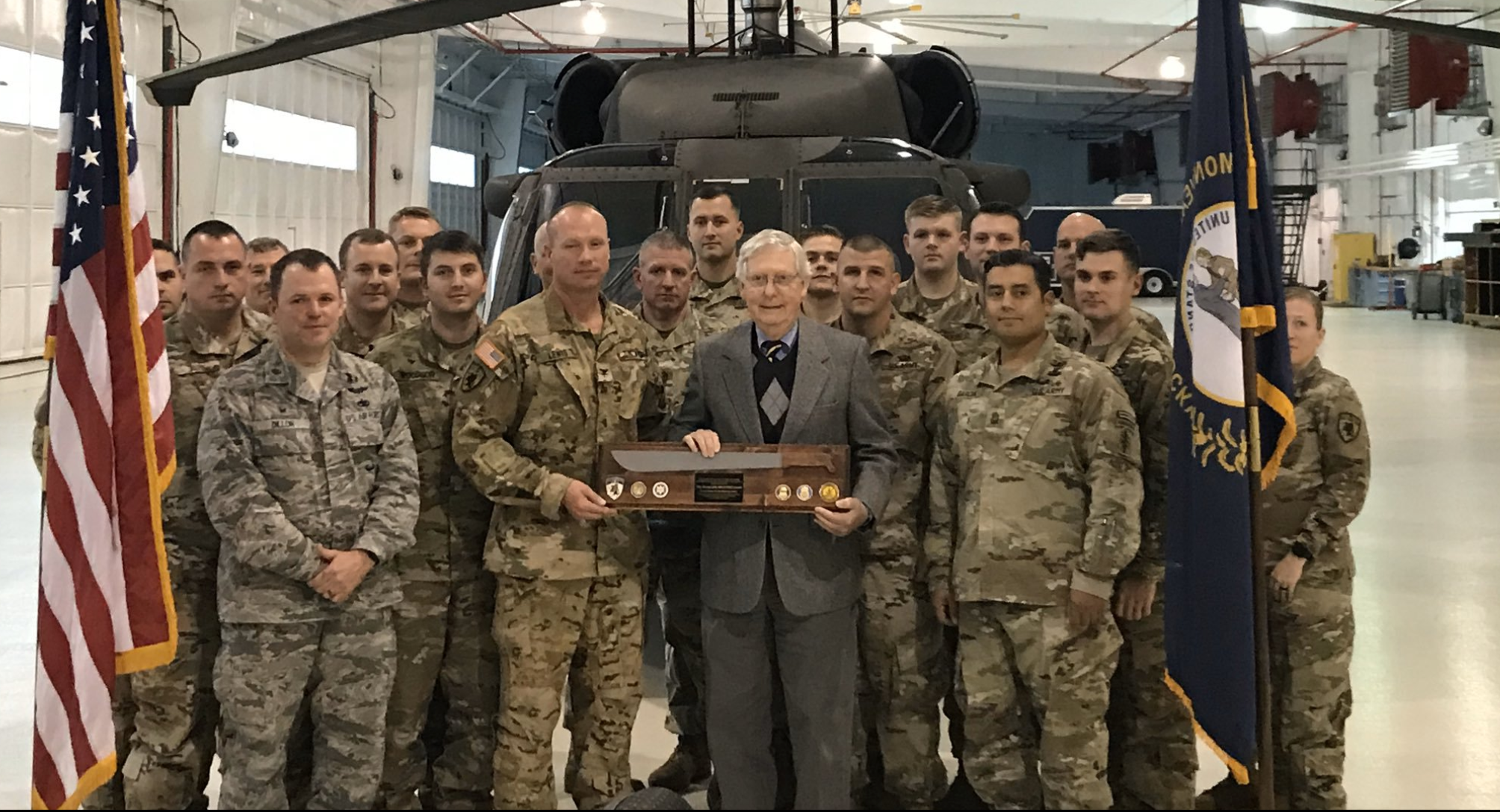 Senate Majority Leader Mitch McConnell (R-KY) accepted an honorary machete this week that was used to chop down “thousands” of marijuana plants.

McConnell received the drug war trophy following an opening ceremony for a Volunteers of America center in Kentucky focused on serving women and children coping with the effects of substance misuse.

He attended the Monday event alongside the White House drug czar, Jim Carroll, according to a press release.

“In recognition of many years of ardent & steadfast commitment to a drug-free Commonwealth this machete is hereby presented to The Honorable Mitch McConnell, U.S. Senate Majority Leader. The affixed machete was used on the eradication of thousands of clandestine marijuana plants” https://t.co/YAWQ9xRuep pic.twitter.com/A3fowl87xh

While the majority leader championed a provision of the 2018 Farm Bill that federally legalized hemp—and has since pressured federal agencies to expeditiously implement regulations for the crop and its derivative CBD—he’s no fan of the plant’s “illicit cousin” marijuana, as he calls it.

And now he’s been formally recognized for that stance. The machete, attached to a plaque, reads: “In recognition of many years of ardent and steadfast commitment to a drug-free Commonwealth, this machete is hereby presented to The Honorable Mitch McConnell, U.S. Senate Majority Leader. The affixed machete was used on the eradication of thousands of clandestine marijuana plants.”

The ceremonial sword stands in stark contrast to another product McConnell wielded around this time last year. Following the Senate passage of the farm bill legalizing hemp, the senator used a hemp pen to sign a conference report on the legislation. He also offered it to the president for final signing of the bill.

Making it official with my hemp pen!🖋️ Proud to have served as conferee on #FarmBill & to fight for #Kentucky priorities. With today's signature, my provision to legalize industrial #hemp is 1 step closer to reality. Looking forward to voting YES on this bill & sending to @POTUS pic.twitter.com/8ypwBebXy7

While McConnell has routinely resisted marijuana reform, he visited California last month and met with industry executives and toured a cannabis facility. That’s led some to speculate that he’s open to modest reform legislation, as the visit came in the backdrop of a House vote in favor of a bill that would protect banks that service marijuana businesses from being penalized by federal regulators.

But now advocates might be left wondering whether McConnell’s new marijuana machete will be metaphorically used to chop up House-passed cannabis legislation in what Democrats call his Senate “legislative graveyard.”