But while legalization appears to have been a driving factor for decreased illicit cultivation in Oregon, that doesn’t seem to be the case in Washington. The difference, it seems, may have to do with the way each state wrote its marijuana laws.

Previous studies have already identified certain benefits from legalization, including those impacting health and the economy. In the new investigation, researchers from Central European University in Hungary were interested in looking at whether legal access to marijuana could also help the environment. Their study was published this month in the journal Ecological Economics.

“The data show a decrease in the number of discovered grow sites in national forests after the vote to legalize recreational cannabis in Washington and Oregon.”

They focused on illegal grow sites within national forests because, as they explain it, these grows often result in “significant ecological impacts,” including the removal of native vegetation, chemical pollution (such as the introduction of fertilizer or pesticides in the environment) and “opportunistic” poaching of wildlife. Illegal marijuana grows also threaten the safety of people who visit these public lands, as some sites may be run by “organized crime syndicates,” the researchers wrote.

The commercial market for marijuana sales have been open in Washington and Oregon since 2014 and 2015, respectively. The two states are among what the Office of National Drug Control Policy calls the “Marijuana Seven,” or the top seven states where people grow cannabis illegally. Records show 245 illegal cultivation sites were discovered between 2004 to 2017 in the Pacific Northwest: The single largest site, found in Wallowa-Whitman National Forest, which covers parts of Oregon and Idaho, had 91,035 plants. 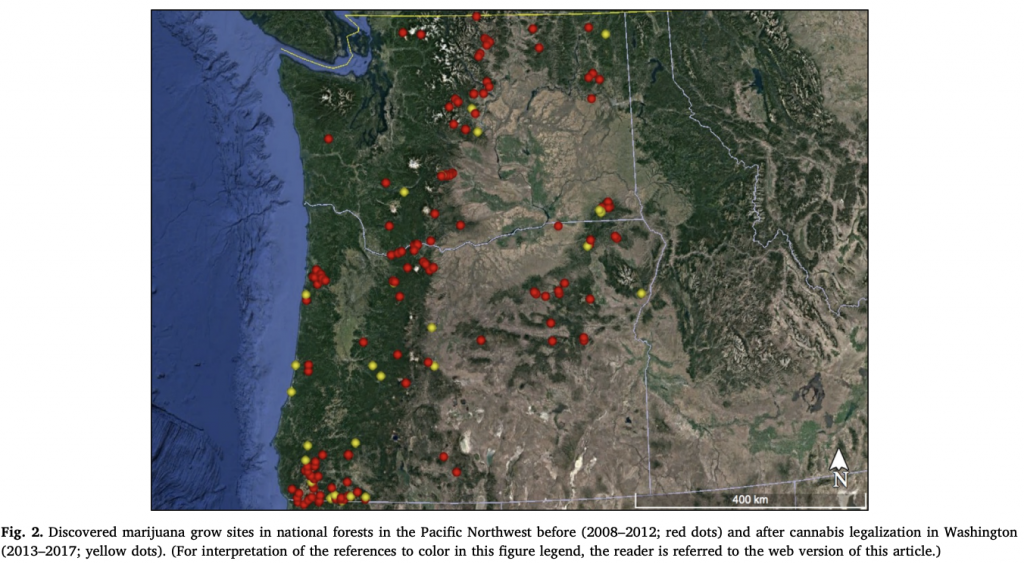 A closer look at the data and other measures, however, suggests that legalization may not have played a significant role in the decline of illegal grows in Washington’s national forests. Instead, the authors point to the annual number of law enforcement officers in the state as well as the comparatively low cost of illegal cannabis as contributing factors.

The difference, the authors write, may have to do with “state specific characteristics.” For example, Washington has a 37 percent tax on the commercial sale of cannabis, while Oregon’s tax rate is 17 percent.

“This difference in taxation may incentivize some consumers to return to the illicit market where the cost of cannabis may be cheaper, thus negating some of the beneficial effects legalization may be able to provide with regards to illegal production, as is seen in Oregon,” the study states.

Another potentially important factor, though not addressed in the study, is that home cultivation of recreational marijuana is prohibited in Washington but allowed in Oregon..

“The results of this study suggest that for areas impacted by illegal cultivation of cannabis on public and protected lands, legalization may assist in decreasing the proliferation of this activity, and thereby serve within a broader ecological conservation strategy,” the study authors write. “However, legalization policies must actively prioritize incentives and measures that discourage the continuation of illicit production for these beneficial effects to occur.”

To further inform their work, researchers also asked the U.S. Forest Service to weigh in by answering a list of questions regarding illegal cannabis operations. Representatives with the Forest Service said they actually didn’t believe legalization had impacted the number of illegal cultivation sites on public lands. Rather, they pointed to budget cuts contributing to their inability to actually go out and find these sites.

“Many state and local cooperators are reducing or even eliminating the resources that typically assist the Forest Service with counter marijuana cultivation operations,” they told researchers. “These resources are now often committed to addressing regulatory concerns or crimes related to ‘legal’ growing activities on private lands.”

The Forest Service also noted that it expects to see illegal marijuana grows on public lands as “a significant problem for many years.”

Nonetheless, the researchers concluded that “legalization of recreational cannabis is found to contribute to a decline in illegal marijuana cultivation in Oregonian national forests” and that the policy change “has been instrumental in declining illegal marijuana production.”

But the differing analysis of illegal grows in Washington underscores that “the way in which liberalized policies are enacted may be crucial in determining the end result.”

Photo by Sam Doucette on Unsplash.