In a new paper published by the National Cancer Institute, a research team of six—including authors from federal agencies such as the National Institute on Drug Abuse (NIDA), National Institutes of Health (NIH) and Food and Drug Administration (FDA)—turn a critical eye on cannabis regulatory systems in the United States, writing that administrative burdens stifle much-needed scientific investigation into the drug’s potential health applications and safety concerns.

“Conflicting federal and state cannabis regulations hinder research in several ways,” says the article, published this month in the Journal of the National Cancer Institute Monographs, “including the inability of researchers to access products that are legal in their state, a lack of standardization and quality control of cannabis and cannabis-derived products within and across states, and no national oversight of this standardization and quality control or the industry.”

“The most obvious regulatory hurdle in conducting cannabis and cannabinoid research is the schedule I status of cannabis.”

With most states having legalized marijuana in some form, an array of new and relatively unstudied products have appeared on the consumer and medical markets, the authors write. “With widespread availability of novel cannabis and cannabinoid products, there is an urgent need to understand their safety and potential effectiveness for medical indications.”

But barriers stemming from the federal Controlled Substances Act (CSA), including bureaucratic red tape and a requirement that all approved projects obtain cannabis through NIDA, mean that research—and scientific awareness—don’t keep pace with how real-world products are being used.

“The administrative challenges for cannabinoid research include the single domestic source requirement for cannabis, complex and lengthy registration processes, and schedule I classification of nonintoxicating cannabis components such as CBD,” the paper says. “Because of the time, expenses, and regulatory knowledge required to get a single study started in this field, researchers will frequently opt not to pursue work in this area. Consequently, although more issues need to be addressed by diverse experts, the field will likely continue to be limited to those institutions and researchers who have historically pursued this work.”

The article, “Challenges for Clinical Cannabis and Cannabinoid Research in the United States,” is part of a series of papers that resulted from an online symposium last year organized by the National Cancer Institute (NCI) focusing on the state of science surrounding cannabinoids and cancer. The nine-paper collection also includes articles on cannabis policy and public health, cancer risks and nonmedical cannabis use, using cannabinoids to treat adverse effects of cancer or chemotherapy and cannabinoids’ possible role in cancer treatment and prevention.

The paper on challenges faced by researchers and clinicians is especially notable because it represents members of the federal cannabis regulatory apparatus critiquing the apparatus itself.

“In an effort to elucidate both the safety and the potential therapeutic uses of these products for a range of indications for which they are already approved in an overwhelming majority of the United States,” they write, “researchers must work tirelessly through institutional, regulatory, funding, and drug supply hurdles, all of which significantly influence the scientific impact, public health relevancy, and efficiency of investigations.”

Recreational and medicinal cannabis use has changed dramatically over the past decade; yet research examining the risks and benefits of cannabis use has lagged behind the media promotion and their use by the general public and cancer patients. https://t.co/zzebFVVL6d @theNCI pic.twitter.com/4BcsamqRZf

To help clear the barriers, the paper says, collaborations can be especially effective, with more experienced researchers advising those less familiar with the field’s unique features. Universities “and agencies like the FDA can also provide guidance and support,” it adds. International partnerships, meanwhile, “have significant potential to enhance research collaboration by leveraging opportunities in other countries and potentially avoiding difficult regulations that hinder development.”

Some reforms aimed at easing federal restrictions have ultimately added to the confusion, the authors note, such as with the federal legalization of hemp and hemp-derived CBD through the 2018 Farm Bill.

“Although there has been movement in the field to relax regulations, including the landmark change decontrolling CBD derived from hemp, many changes have, in fact, made the regulatory landscape more confusing and difficult to navigate for the researcher,” they write. “For example, in the case of CBD, according to the DEA interim final rule that outlines DEA’s amendments to the CSA made by the Agriculture Improvement Act of 2018, products with CBD specifically derived from the plant that contain less than 0.3% delta-9-THC are now decontrolled, yet synthetic CBD remains on schedule I according to the CSA. Despite the fact that the molecule is the same, its origins define its regulatory standing.” 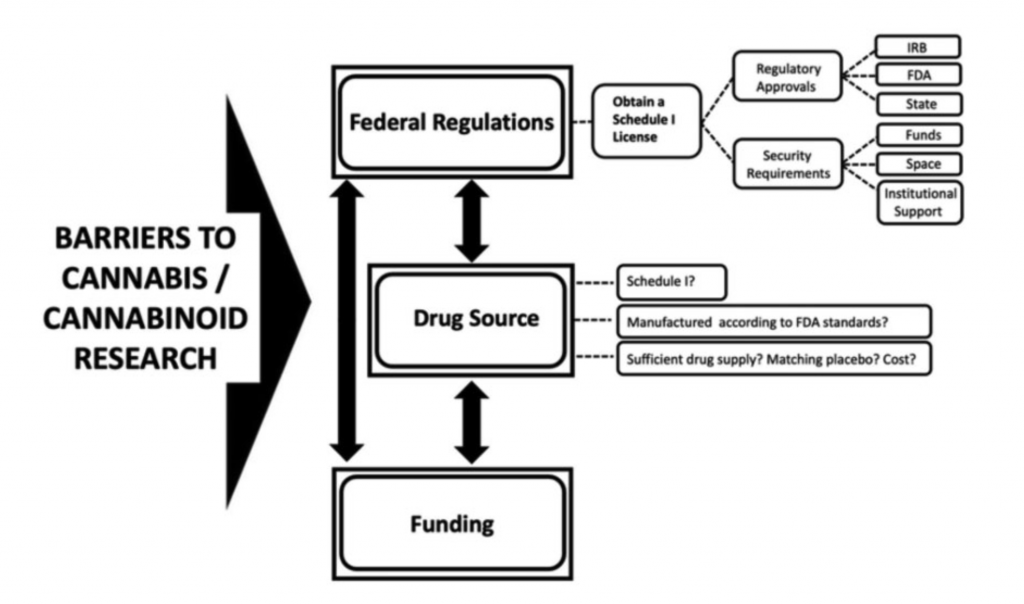 Things are even more convoluted when it comes to delta-9 THC, the main psychoactive component of cannabis, which the paper notes “has 3 distinct schedules based on the source of production and the formulation”: FDA-approved oral capsules of a synthesized version of the cannabinoid are in Schedule III of the CSA, while a similar FDA-approved liquid version is in Schedule II. Non FDA-approved formulations of the same synthesized THC, meanwhile, remain in Schedule I—along with natural THC derived from cannabis itself.

“These are a few examples of the confusing nature of cannabinoid scheduling that require near mastery to successfully identify whether a proposed trial with a potential study medication requires a schedule I DEA license,” the article says.

That’s not to say progress can’t be made when researchers and regulators cooperate, it adds, pointing to the government’s approval and rescheduling of Epidiolex, a prescription concentrate of cannabis-derived CBD. FDA approved the drug to treat certain forms of pediatric epilepsy in mid-2018, and DEA rescheduled it a few months later.

“The marketing approval of Epidiolex, particularly in light of the DEA’s placement of FDA-approved CBD-containing products in schedule V according to the CSA,” the paper says, “shows that the clinical development of cannabis-derived medicines derives from the concerted evolution of biomedical knowledge and regulatory flexibility.”

But for now, the lack of deep and thorough scientific knowledge of cannabis is having a real impact on consumers and patients. Not only are the long-term effects of high-THC or regular CBD use not well known, but doctors are shying away from recommending cannabis to patients even in cases where it might be beneficial.

“Oncologists frequently discuss the clinical use of cannabis with their patients although most feel they lack an adequate knowledge base to advise effectively,” the paper says. Despite “strong evidence in support of the use of cannabinoids for chemotherapy-induced nausea and vomiting as well as pain,” it adds, “many oncologists prefer to recommend approved pharmaceuticals with larger bodies of supporting evidence.”

State cannabis policies differ in areas that may have implications for public health and consumer safety. Studying these policy differences and their impacts on cancer health will be important to inform future policymaking. https://t.co/dO81AlOUY1 pic.twitter.com/rKGg2OoRv3

Efforts to expand research into cannabis and other Schedule I drugs, such as certain psychedelics, are currently underway. Last week, DEA and NIDA both testified at a House Energy and Commerce subcommittee hearing in favor of a White House proposal to streamline the process.

DEA said in written testimony that “expanding access to Schedule I research is a critical part of DEA’s mission to protect public safety and health.”

“It is critical that the scientific and medical community study Schedule I substances, as some may turn out to have therapeutic value,” DEA Principal Deputy Administrator Louis Milione said. “DEA supports the administration’s legislative proposal’s expansion of access to Schedule I research. DEA looks forward to continuing to work with the research community and our interagency partners to facilitate Schedule I research.”

NIDA submitted a separate report to Congress in October emphasizing that the Schedule I status of controlled substances such marijuana is preventing or otherwise discouraging research into their potential risks and benefits.

In an interview earlier this month, NIDA Director Nora Volkow said that even she—the top federal official overseeing drug research—is personally reluctant to conduct studies on Schedule I substances like marijuana because of the “cumbersome” rules that scientists face when investigating them.

Calls to expedite research into Schedule I drugs seems to be an emerging theme in the Biden administration. For example, DEA has repeatedly proposed significant increases in the production of marijuana, psilocybin and other psychedelics for research purposes, with the intent of aiding in the development of new federally approved therapeutic medications.

NIDA’s Volkow told Marijuana Moment in a recent interview that she was encouraged by DEA’s prior proposed increase in drug production quota. She also said that studies demonstrating the therapeutic benefits of psychedelics could be leading more people to experiment with substances like psilocybin.

But while the production developments are promising, advocates are still frustrated that these plants and fungi remain in the strictest drug category in the first place, especially considering the existing research that shows their medical value for certain conditions.

There has been at least one recent development in the fight to modernize marijuana research. President Joe Biden signed a massive infrastructure bill last month that includes provisions aimed at allowing researchers to study the actual cannabis that consumers are purchasing from state-legal dispensaries instead of having to use only government-grown cannabis.

A federal appeals court recently dismissed a petition to require the DEA to reevaluate cannabis’s scheduling under the Controlled Substances Act. However, one judge did say in a concurring opinion that the agency may soon be forced to consider a policy change anyway based on a misinterpretation of the therapeutic value of marijuana.