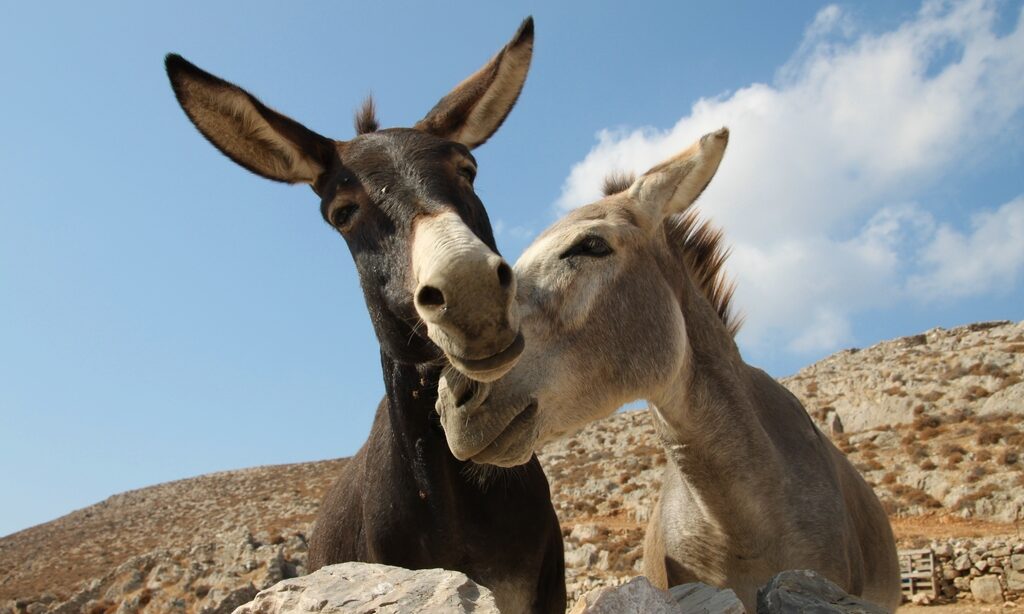 Feeding donkeys fresh marijuana buds is inadvisable, according to a new study that looked at novel cases of cannabis toxicosis in two equine.

The study, published in the Journal of Veterinary Diagnostic Investigation, investigated what happened after a jack and jenny (the terms for male and female donkeys, respectively) were fed a few grams of cannabis that was being legally grown for human consumption.

The donkeys’ symptoms sound a lot like what happens when a person takes an edible that’s too strong. They presented as lethargic and their hearts were beating faster than normal, for example. But while it took longer to come down from the high for the donkeys compared to humans, with symptoms lasting 44 hours in the younger jenny before she was taken to the hospital, the study says both “recovered uneventfully within 24 hours of peak effects.”

“Marijuana toxicosis is typically seen by companion animal veterinarians. However, with increased marijuana availability, there is a greater potential for toxicosis in other species,” the study authors wrote. To the scientists’ knowledge, this is the first study documenting cases of cannabis consumption in donkeys.

A positive outcome from the donkey highs was that scientists had a chance to experiment with testing procedures to confirm that the symptoms were due to exposure to cannabinoids. They used a “screening assay in collaboration with a veterinary diagnostic laboratory,” which the study authors said “may be useful when an equine practitioner suspects marijuana toxicosis in a patient.”

While they were able to determine those cannabinoid concentrations in the donkeys’ plasma, the researchers noted that more data is needed to figure out what dose of cannabis causes toxicosis in the species.

In terms of treating donkeys who ate too much marijuana, the study says practitioners could potentially use gastric lavage, administer activated charcoal or use laxatives.

“These adjunctive therapies are targeted at decreasing gastric absorption and facilitating excretion to limit the adverse clinical effects of cannabis,” they wrote. “There is no scientific evidence to support the benefit of these therapies for marijuana toxicosis in equine patients. However, activated charcoal and gastric lavage are effective means of supportive treatment for marijuana toxicosis in canine patients.”

The study doesn’t directly comment on the ethics of feeding cannabis to donkeys, but as a general rule, people are discouraged from intentionally intoxicating animals and should take precautions to avoid accidental ingestion.

Another study released last year found that, apparently, some canines are even getting intoxicated off marijuana by eating the feces of people who’ve consumed cannabis.

Separately, there is interest within the scientific community about the effects of non-intoxicating CBD in animals like dogs and horses.

Dogs with epilepsy experience considerably fewer seizures when treated with CBD oil, a study published in the journal Pet Behaviour Science in 2019 found.

The Food and Drug Administration (FDA), for its part, has repeatedly warned pet owners about using CBD to treat firework-related anxiety in pets around the July 4 holiday.