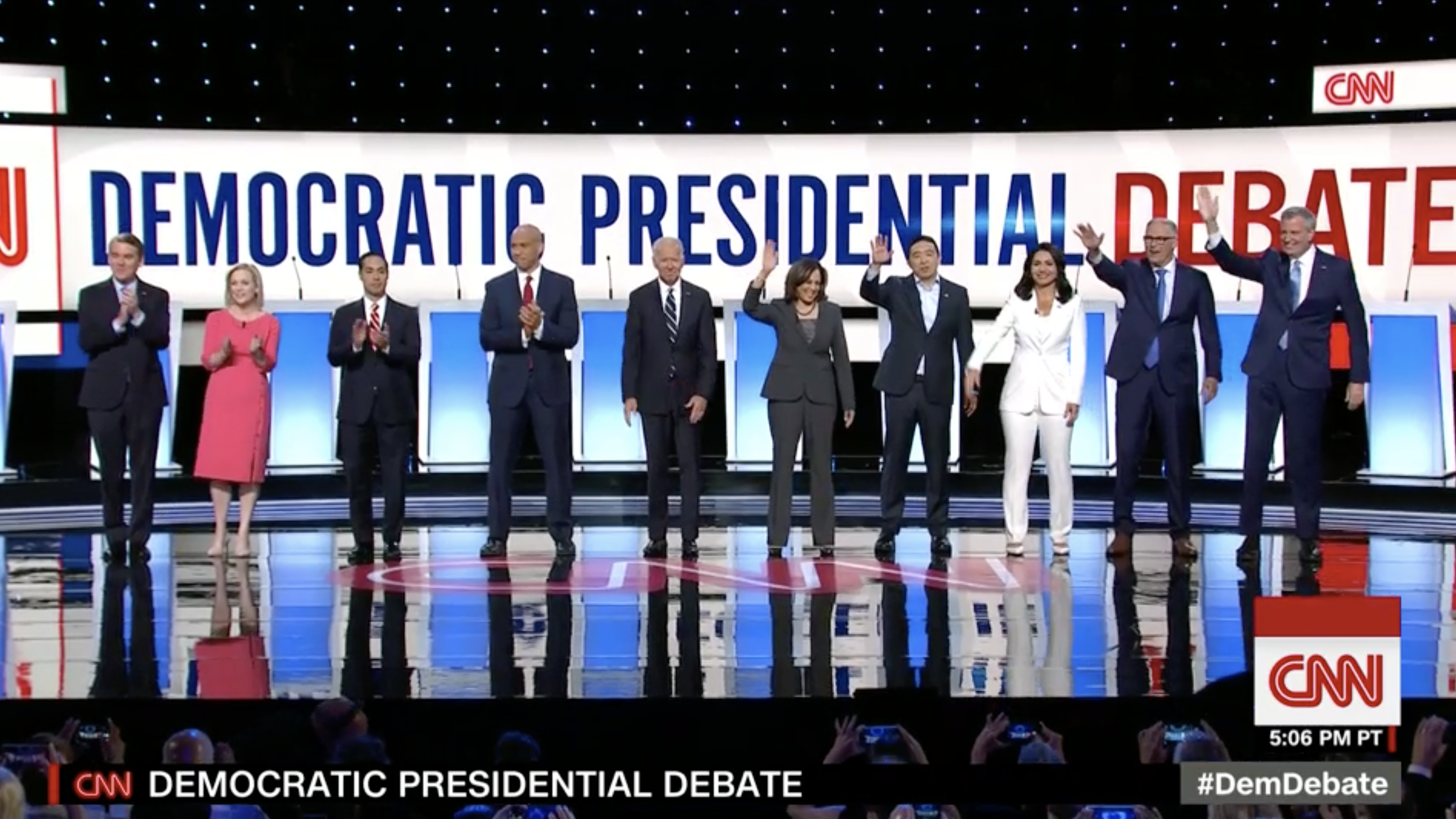 Democratic candidates clashed on marijuana policy during Wednesday’s presidential debate, with former Vice President Joe Biden’s record of supporting harsh criminalization policies being a focus of contention for other contenders.

Sen. Cory Booker (D-NJ) called out Biden, slamming his role in advancing punitive criminal justice reform legislation and arguing that the country needs “far more bold action on criminal justice reform,” and that includes “true marijuana justice, which means legalizing it on a federal level and reinvest the profits in communities that have been disproportionately targeted by marijuana enforcement.”

Sen. Kamala Harris (D-CA) and Rep. Tulsi Gabbard (D-HI) also weighed in on cannabis policy, with the California senator stating that the next president would have to be “cleaning up the mess [Biden] created in the United States Senate” and then facing criticism from Gabbard over her own marijuana record as a prosecutor who once campaigned against legalization.

“This is a crisis in our country because we have treated issues of race and poverty, mental health and addiction, with locking people up and not lifting them up,” Booker said. “Every major crime bill—major and minor—has had [Biden’s] name on it and not mine.”

Biden’s drug policy platform—and particularly his decades-long Senate record as an author of punitive anti-drug laws that have contributed to mass incarceration and racial inequities in the criminal justice system—has become a target for reform-minded candidates in recent weeks. He was first to be asked about criminal justice at the debate and, highlighting his newly somewhat evolved position, said that “when someone is convicted of a drug crime, they end up going to jail and to prison” when they “should be going to rehabilitation.”

But while the former vice president has attempted to distance himself from his drug warrior image, including by unveiling a criminal justice reform plan that would involve decriminalizing cannabis and expunging records of those with prior marijuana convictions, his opponents won’t let him forget his past positions, nor the fact that he still opposes full legalization.

“The house was set on fire and you claimed responsibility for those laws and you can’t just now come out with a plan to put out that fire,” Booker said. “We have got to have far more bold action on criminal justice reform.”

We have a mass incarceration crisis in this country because we’ve tried to solve addiction, mental health and poverty by locking people up, not by lifting people up. #DemDebate

“All of the problems that he is talking about that he created, I actually led the bill that got passed into law that reverses the damage that your bills, that you are frankly—correct me, Mr. Vice President—you are bragging, calling it the Biden crime bill up to 2015,” Booker said.

Biden pushed back by against the New Jersey senator, inquiring about the then-Newark mayor’s position on stop-and-frisk policing policies.

If we want to talk about the Crime Bill, let's hear from the President who chose @JoeBiden as his running mate—twice. pic.twitter.com/C3w9zpjrlS

Booker accused the former VP of “trying to shift the view from what you created,” noting that “there are people right now in prison for life for drug offenses because you stood up and used that tough-on-crime, phony rhetoric that got a lot of people elected but destroyed communities like mine.”

“This isn’t about the past, sir. This is about the present right now.”

Our justice system is deeply broken—it treats you better if you’re rich and guilty than poor and innocent. We need bold, comprehensive reform, and we need it now: https://t.co/TddNanXnbh #DemDebate

Former Housing and Urban Development Secretary Julian Castro joined in to say that he agreed Biden’s role in pushing the 1994 crime bill “was a mistake” and that “he has flip-flopped on these things, and that’s clear.”

Washington Gov. Jay Inslee (D) invited candidates to visit his state to witness “what criminal justice reform looks like,” touting his initiative to pardon thousands of individuals with cannabis possession convictions on their record.

Here’s some context on the Booker-Biden quarrel:

Shortly after Biden released his criminal justice reform proposal earlier this month, Booker issued a press release deeming the plan inadequate and arguing that the “proud architect of a failed system is not the right person to fix it.”

Joe Biden has the boldest, most comprehensive criminal justice reform proposal in this election.

Booker also said that Biden seems to have an “inability to talk candidly about the mistakes he made, about things he could’ve done better, about how some of the decisions he made at the time, in difficult context, actually have resulted in really bad outcomes.”

Booker has focused on drug policy reform throughout his campaign, striving to distinguish himself from the pack of candidates by emphasizing his support for comprehensive marijuana legalization legislation—bills like his Marijuana Justice Act that go beyond descheduling cannabis and include provisions aimed at promoting social equity in the marijuana industry and righting the wrongs of prohibition.

In March, he took a thinly-veiled swipe at Harris after the senator discussed her past experience with marijuana in a lighthearted manner during a radio interview. Booker contrasted the California senator’s cavalier comments about using marijuana during college with the fact that “we had more arrests for marijuana possession in this country than all the violent crime arrests combined” in 2017.

Gabbard didn’t give Harris a pass to that end, emphasizing that the then-California attorney general “put over 1,500 people in jail for marijuana violations and laughed about it when she was asked if she ever smoked marijuana.”

Tulsi takes down Kamala Harris over her record on criminal justice reform, the death penalty, and the war on drugs -TULSI2020 #DemDebate #Tulsi2020 https://t.co/7XQoiqHThu pic.twitter.com/epf58iQNYI

“As the elected attorney general of California, I did the work of significantly reforming the criminal justice system of a state of 40 million people, which became a national model for the work that needs to be done. And I am proud of that work,” Harris responded. “And I am proud of making a decision to not just give fancy speeches or be in a legislative body and give speeches on the floor but actually doing the work, of being in the position to use the power that I had to reform a system that is badly in need of reform.”

“That is why we created initiatives that were about re-entering former offenders and getting them counseling,” she continued. “It’s why, and because I know the criminal justice system is so broken, it is why I’m an advocate for what we need to do to not only decriminalize but legalize marijuana in the United States.”

Harris filed legislation this month that would remove marijuana from the Controlled Substances Act and invest in programs aimed at helping to repair the damage of the war on drugs.

Biden, meanwhile, has only gone so far as to say that he supports decriminalization and rescheduling.

While drug policy reform was strongly featured at Wednesday’s event, it received little attention during an earlier debate on Tuesday—which involved pro-legalization candidates such as Sens. Bernie Sanders (I-VT) and Elizabeth Warren (D-MA).

At that event, South Bend, Indiana Mayor Pete Buttigieg brought up alcohol prohibition and said the country’s decision to reverse that decision shows that more change on other issues is possible. “This is a country that once changed its Constitution so you couldn’t drink and then changed it back because we changed our minds about that,” he said.

Biden echoed Klobuchar’s point at the Wednesday debate, arguing that we “should put some of these insurance executives who oppose my [healthcare] plan in jail for the nine billion opioids they sell out there.”

For his part, entrepreneur Andrew Yang said he would “trust anyone on the stage more than I trust our current president on matters of criminal justice.”