A majority of Connecticut residents favor legalizing marijuana, according to a new poll released on Thursday. But even among those who oppose the reform move, a significant number said they could still be persuaded under certain circumstances, the survey found.

As lawmakers push to advance a governor-backed legalization bill, the poll showing that 63.4 percent of state residents support ending cannabis prohibition comes as a welcome result for advocates. Its release also comes weeks after a key Connecticut committee held a hearing on the legislation. 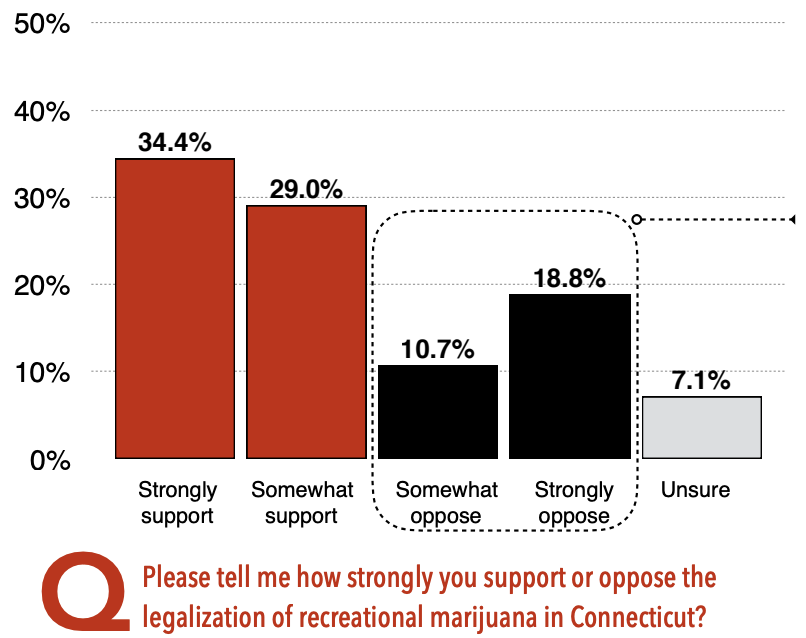 In response to a separate question, fewer people (45.3 percent) said they back the specific legalization proposal in the legislature that would give municipalities partial tax revenue from cannabis sales only if they allow a dispensary to operate in their jurisdiction.

As is typically the case with cannabis surveys, younger people and Democratic voters proved most likely to favor legalization. But unlike many others, this poll dove into the opposition and found that a solid percentage of respondents would be inclined to change their position if legalization produced specific results.

Of the roughly 30 percent of those who said they aren’t supportive of taxing and regulating cannabis, about 24 percent said they would back legalization if it lowered crime and incarceration in the state, 20 percent said they would support it if tax revenue from sales would “help with Connecticut’s fiscal situation and resolve the budget deficit” and about 28 percent said they’d change course if marijuana was regulated similarly to alcohol in a way that prevents youth access and impaired driving.

The main reasons people said they opposed legalization were concerns that marijuana leads to more dangerous drugs (18.4 percent), that it impairs driving (12.6 percent) and simply because they are “against drug usage” (10.5 percent).

Taken together, these results stand to embolden lawmakers as they work to pass a legalization bill, though the specific result on tax revenue only for cities that allow sales could lead some legislators to support amending the current proposal.

In any case, the effort, like several others across the country, could be impeded by the coronavirus outbreak. The Senate president and House speaker, who sponsored the legislation, recently said that because the state Capitol is closed until at least March 30 to mitigate the spread of the virus, legislative priorities have shifted and that could interfere with legalization.

The survey—which was conducted by the Hartford Courant and Sacred Heart University, involving interviews with 1,000 residents from February 24 to March 12—also asked participants about a proposed “clean slate” bill and its provisions. Less than half said they’d heard about the existing legislation, which would make people eligible for expungements for certain offenses seven years after their latest conviction.

However, after the proposal was described, 62.5 percent said they either strongly or somewhat support it.

“This legislation proposes to automatically erase criminal records for specific misdemeanor crimes and decriminalized felony offenses seven years after the person’s most recent conviction,” the survey explained. “Such offenses include possession of less than four ounces of marijuana before October 1, 2015, third-degree criminal trespassing and operating a motor vehicle with a suspended license.”

Of the 23 percent who said they’re against the policy, a little of a quarter said it’s because they feel people should face consequences for violating a law, 12.6 percent said records should be erased and should be available to the public and nine percent said they need more information before embracing the proposal. 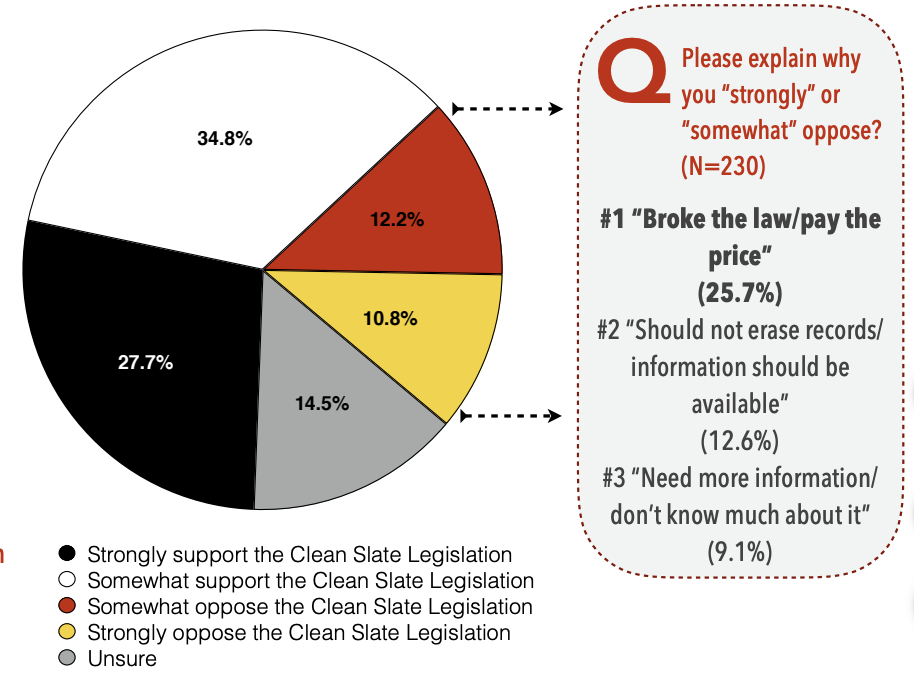 Further, the poll asked respondents whether they feel people convicted of misdemeanors alone “deserve” to have their records cleared. Nearly 70 percent said they’re in favor of that policy.

However, asked whether such individuals should not have the ability to have their records expunged, 34.7 percent agreed while 53.5 percent disagreed.

As was the case with the legalization question, Republicans and older individuals were less likely to support the criminal justice reform proposals.

While results were mixed for questions about other issues such as taxes and tolls, for example, “support for legalization of recreational marijuana and the proposed ‘clean slate’ laws seems to be strong,” Lesley DeNardis, executive director of the Institute for Public Policy, said in a press release. “These are interesting and challenging times, and while we all are now in the midst of the coronavirus pandemic, it’s also important to see how residents are feeling about other important issues that may impact our daily lives in the near future.”

Baltimore To End Most Drug Prosecutions Amid Coronavirus Outbreak