More than twice as many Americans think that marijuana has a positive impact on its consumers and society at large than say the same about alcohol, according to a new Gallup poll.

And perhaps more revealing, people who have actually used cannabis are far more likely to tout its positive impacts compared to just a small fraction of alcohol drinkers who feel the same way about their drug of choice

Overall, the marijuana poll found that Americans are evenly divided when it comes to questions about the effects of cannabis on individual consumers and society overall. Fifty-three percent of respondents said marijuana has a “positive” impact on the consumer (in contrast to 45 percent negative), and 49 percent said the plant is good for society (compared to 50 percent with the opposite view).

That makes it all the more notable that just 27 percent of people said that alcohol is good for the individual drinker and 23 percent said alcohol is a societal positive. Fully 75 percent of Americans say booze is bad for society, and 71 percent say it’s no good for most individuals who consume it. 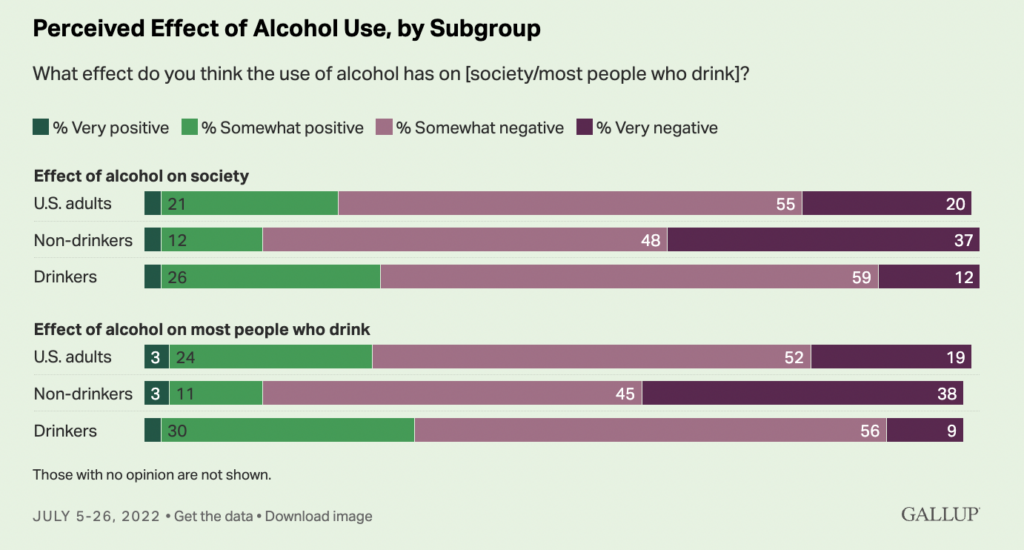 This is generally consistent with the results of a separate poll released in March that found more Americans think it’d be good if people switched to cannabis and drank less alcohol compared to those who think the substance substitution would be bad.

But the Gallup poll, released in two waves on Tuesday and earlier this month, also reveals another interesting contrast in how the two substances are perceived. People who said that they’ve at least tried marijuana were far more likely to say that it’s positive for the consumer (70 percent) and society (66 percent) compared to drinkers who felt the same way about alcohol (32 percent and 27 percent, respectively).

Thirty-five percent of non-cannabis users said the plant is good for people who use it and 27 percent said it was good for society. Non-drinkers hold even more negative views about alcohol, with just 14 percent saying it’s positive for the drinker or society.

So while alcohol is legal and widely accepted from a societal standpoint in the U.S.—and cannabis is prohibited and often stigmatized—the data suggests that people still generally feel that marijuana is the better choice. Not even people who drink believe that alcohol is a net positive.

53% of Americans say marijuana use has a positive impact on society, while 45% view it as negative for society. https://t.co/EQxpZq8laZ pic.twitter.com/IwwJpbJcBE

The new cannabis poll also included some additional datapoints of note. For example, it showed that nearly half of Americans (48 percent) have tried marijuana at one point. Gallup also asked about edible use for the first time, finding that 14 percent of Americans consume edibles. Sixteen percent of respondents said they smoke marijuana. 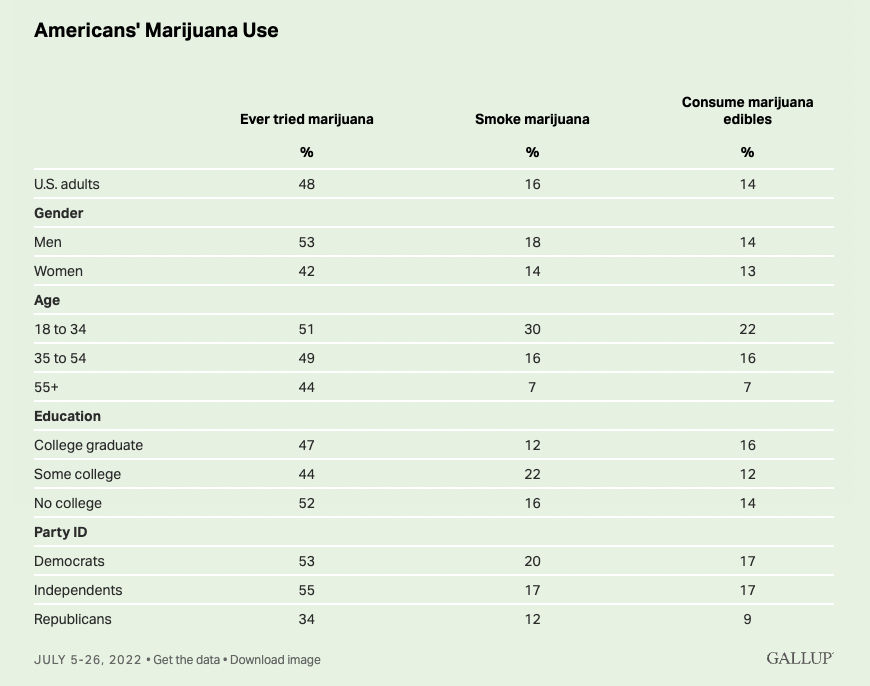 In any case, while there are differing opinions about the pros and cons of marijuana for people and society, even some of those who feel it doesn’t have a positive impact still believe it shouldn’t be criminalized. A Gallup poll from late last year found that 68 percent of Americans back legalization, for example.

“The future of marijuana legalization, at both the federal and state levels, may partly depend on what medical and other research studies show is the impact of the drug on users and society at large, particularly if its use continues to expand,” Gallup said. “But with young people being more familiar and comfortable with marijuana, their greater tolerance may be destined to prevail over time.”

“For now, Americans are roughly divided into proponents and detractors of the drug,” it said.

For these latest surveys, Gallup put the questions to 1,013 adults from July 5-26. The margin of error is +/- four percentage points.

Meanwhile, public perception aside, marijuana legalization does appear to be attracting more adult consumers in states with regulated markets. That’s partly evidenced by the fact that in states like Arizona, Illinois and Massachusetts have seen months where tax revenue from cannabis sales have outpaced those derived from alcohol purchases.