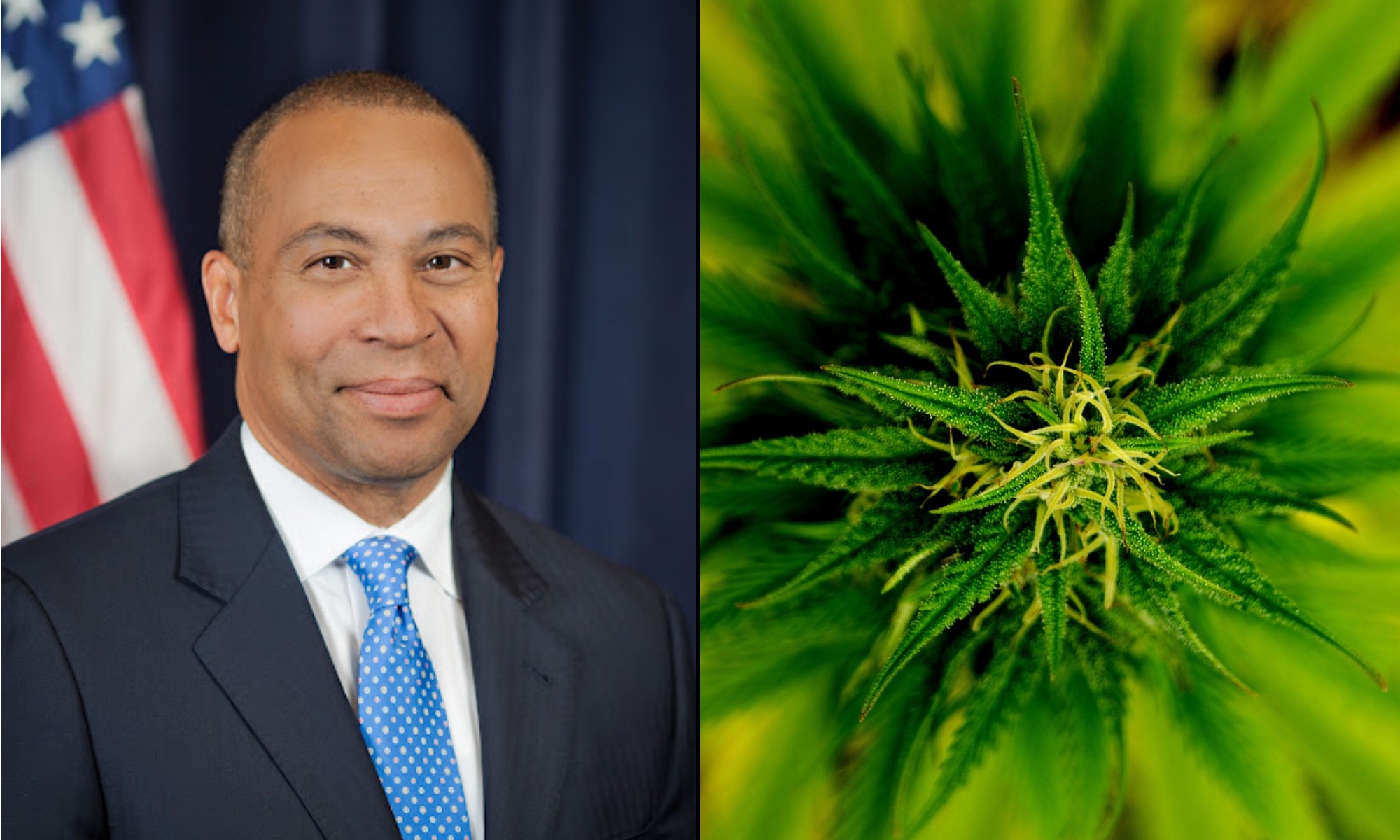 Former Massachusetts Gov. Deval Patrick (D) announced on November 14, 2019, that he was seeking the 2020 Democratic presidential nomination and dropped out on February 12.

The latecomer to the race does not have an especially reform-friendly record on drug policy issues compared to many of his rival contenders. However, after launching his campaign for the White House, he came out in favor of legalization.

During his time as governor, he voiced opposition to a marijuana decriminalization proposal and raised concerns about a medical cannabis legalization measure. After voters approved that latter initiative, he said he wished the state didn’t have the program, and his administration faced criticism over its implementation.

That said, Patrick, who also served as the U.S. assistant attorney general for the civil rights division, also previously took action in support of modest proposals such as resentencing for people with non-violent drug convictions. Here’s where the former governor stands on cannabis.

This piece was last updated on February 13, 2020 to include the candidate’s statements and policy actions on marijuana since joining the race.

Patrick’s administration said that despite a marijuana decriminalization policy going into effect following the passage of a 2008 ballot initiative, law enforcement should be able to continue to search people suspected of possession. However, his office declined to approve a request from prosecutors to delay the implementation of the voter-approved policy change.

After the decriminalization proposal passed, Patrick directed the Executive Office of Public Safety and Security (EOPSS) to develop an implementation plan.

“Our office will continue to work collaboratively with EOPSS and the district attorneys and law enforcement agencies on implementation,” a spokesperson said. “It’s an ongoing process.”

The then-governor said he would work to toughen up enforcement of fines levied against people possessing marijuana.

“The bottom line is the governor believes that if people are fined they should pay the fines,” a spokesperson for his administration said.

Following the passage of a 2012 medical cannabis initiative in Massachusetts, Patrick said simply that the “voters have voted,” and pledged that he wouldn’t seek to repeal the law.

But there were some complications that arose during his administration’s medical marijuana licensing approval process.

In February 2014, Patrick contradicted the state health department, which had recently announced that 20 business licenses had been accepted.

“Rather than wait till the end when all that vetting and screening had been done, we’re going to do that first cut from 100 [applicants] down to 20, and we’re going to tell everybody,”

The next month, he dismissed requests for a review of the licensing process by applicants who the health department had rejected.

“I don’t think we gain anything by starting over,” he said. “We are in the middle of a process. Nobody has a license, no one is going to get a license until we meet the standards of the application process.”

Patrick was also criticized for failing to follow up with patient advocates who urged him to effectively implement the program.

“It appears the governor wants to skip out of office without addressing medical marijuana because he doesn’t want to talk about it and he doesn’t want to deal with it,” Massachusetts Patient Advocacy Alliance Executive Director Matthew Allen said in 2014.

The head of the state’s Public Health Department said in 2015 that complications associated with implementing the licensing program under Patrick left her agency with a deficit of more than $1 million.

When Baker’s applications for medical cannabis licensing reopened under Patrick’s revised system, entrepreneurs flooded the office. The new licensing scheme was designed to remove elements of secrecy and subjectivity from the process under Patrick’s administration.

Despite opposing marijuana decriminalization and expressing concerns about medical cannabis legalization, the governor did sign several drug policy reform bills during his time in office.

Patrick signed legislation in 2012 that reduced mandatory minimum sentences for people with non-violent drug convictions. He’d introduced a package of bills that included a call for the repeal of such mandatory minimums the previous year, earning praise from reform advocates.

“We need an effective and accountable re-entry program for those leaving the criminal justice system,” Patrick said in a statement. “Combining probation and parole, and requiring supervision after release, takes the best practices from other states to assure both public safety and cost savings.”

Another piece of legislation the then-governor proposed was to reduce the scope of “drug-free school zones,” where people charged with drug crimes would face mandatory minimum sentences. He recommended reducing the size of these zones from within 1,000 feet of a school to 100 feet.

Patrick signed off on a bill in 2014 to expand access to drug treatment.

“This bill creates some new rules and new tools for us to use together to turn to our brothers and sisters who are dealing with these illnesses and addiction and help them help themselves,” he said.

Patrick said in December 2019 that he’s in favor of federally legalizing marijuana—a significant shift from his prior resistance to even modest reform. In an interview, the candidate said “I don’t think I ever expressed opposition, it just wasn’t high on my own list of priorities.”

Q Do you regret opposition to decriminalized marijuana as MA Gov & are you in support of legalization today?

PATRICK: "I am, I don't think I ever expressed opposition, it just wasn't high on my own list of priorities… there are concerns who participates in that industry" https://t.co/zyzsZWuxUB pic.twitter.com/rULaz3VBlY

Part of Patrick’s criminal justice reform agenda that he rolled out involves “an end to the criminal prohibition on marijuana,” “treating those dealing with substance use disorders as patients instead of criminals” and “sentencing reform that provides non-violent drug offenders a real chance at re-entering society.”

“This means a justice system that focuses less on warehousing people than on preparing them to re-enter responsible life,” the site says.

In 2007, a spokesperson for Patrick’s office said the governor would veto a proposed marijuana possession decriminalization bill. Patrick told the Associated Press that he had other priorities when asked whether he would sign the legislation.

He was listed as a supporter for a campaign that opposed the 2008 decriminalization ballot measure that voters later approved.

Oddly, two years earlier, Patrick was asked about a decriminalization proposal during a debate and said that while he’s “very comfortable with the idea of legalizing marijuana,” he doesn’t “think it ought to be our priority.” He went on to say that he would veto a proposed decriminalization measure in the legislature.

Massachusetts voters also approved a 2012 medical cannabis initiative while Patrick was in office—in spite of the fact that he declined to endorse the measure.

Asked about the proposal during a radio interview with WBZ, the then-governor first cited an argument in support of legalization made by conservative author William F. Buckley Jr., who said regulating drug sales would remove a profit motive for illicit dealers. Yet he went on to say that “I’m not endorsing” the initiative.

“I’m not expressing a point of view and I’m not dodging, it’s just I’ve got so much else I’m working on,” he said.

The host asked if Patrick would implement the law if voters approved it and he said “that’s, I think, what we’re supposed to do.”

In September 2012, he said that he doesn’t “have a lot of enthusiasm for the medical marijuana” measure, which was set to go before voters two months later.

“I mean I have heard the views on both sides and I’m respectful of the views of both sides, and I don’t have a lot of energy around that,” he said. “I think California’s experience has been mixed, and I’m sympathetic to the folks who are in chronic pain and looking for some form of relief.”

“I really have to defer to the medical views about this and individuals will get a chance to vote on this,” Patrick said in April 2012. “I haven’t been paying much attention to it.”

While his administration struggled to implement the program after voters had approved it, Patrick said in August 2014 that “I wish frankly we didn’t have medical marijuana.”

Patrick doesn’t appear to have publicly weighed in during the Massachusetts campaign about legalizing marijuana for adult-use, which voters approved in 2016 after he had left office.

In 2012, Patrick said during a State of the State Address that Massachusetts should reevaluate how it treats people convicted of non-violent drug offenses.

“In these cases, we have to deal with the fact that simply warehousing non-violent offenders is a costly policy failure,” he said. “Our spending on prisons has grown 30 percent in the past decade, much of that because of longer sentences for first-time and nonviolent drug offenders. We have moved, at massive public expense, from treatment for drug offenders to indiscriminate prison sentences, and gained nothing in public safety.”

“We need more education and job training, and certainly more drug treatment, in prisons and we need mandatory supervision after release,” he said. “And we must make non-violent drug offenders eligible for parole sooner.”

He also said that the “biggest problem is that our approach to public safety has been to warehouse people,” and that the “answer is new policies, not bigger warehouses.”

“We’ve been warehousing people for whom what they really need is treatment and not just time,” he said during a town hall event in 2009.

Patrick voiced support in 2006 for a bill that would legalize the over-the-counter sale of needles in order to prevent the spread of disease.

“Deval Patrick supports this legislation because he believes it will reduce dangerous diseases in our state,” a campaign spokesperson said. “Studies in other states have shown that programs such as these decrease the rates of disease infection without increasing drug use.”

Patrick said in 2012 that he has never “experienced marijuana myself” but that during his school years there “was probably enough around me that there was a second-hand, a contact-high.”

Marijuana Under A Patrick Presidency

It is difficult to assess how Patrick would approach federal marijuana policy if elected president, but his vocal opposition to decriminalization in Massachusetts and his administration’s troubled implementation of medical cannabis legalization is likely to give advocates pause.

That said, his newfound support for legalization is notable.

But for the time being, it appears that Patrick would not make marijuana reform as much of a priority as many of his fellow candidates.