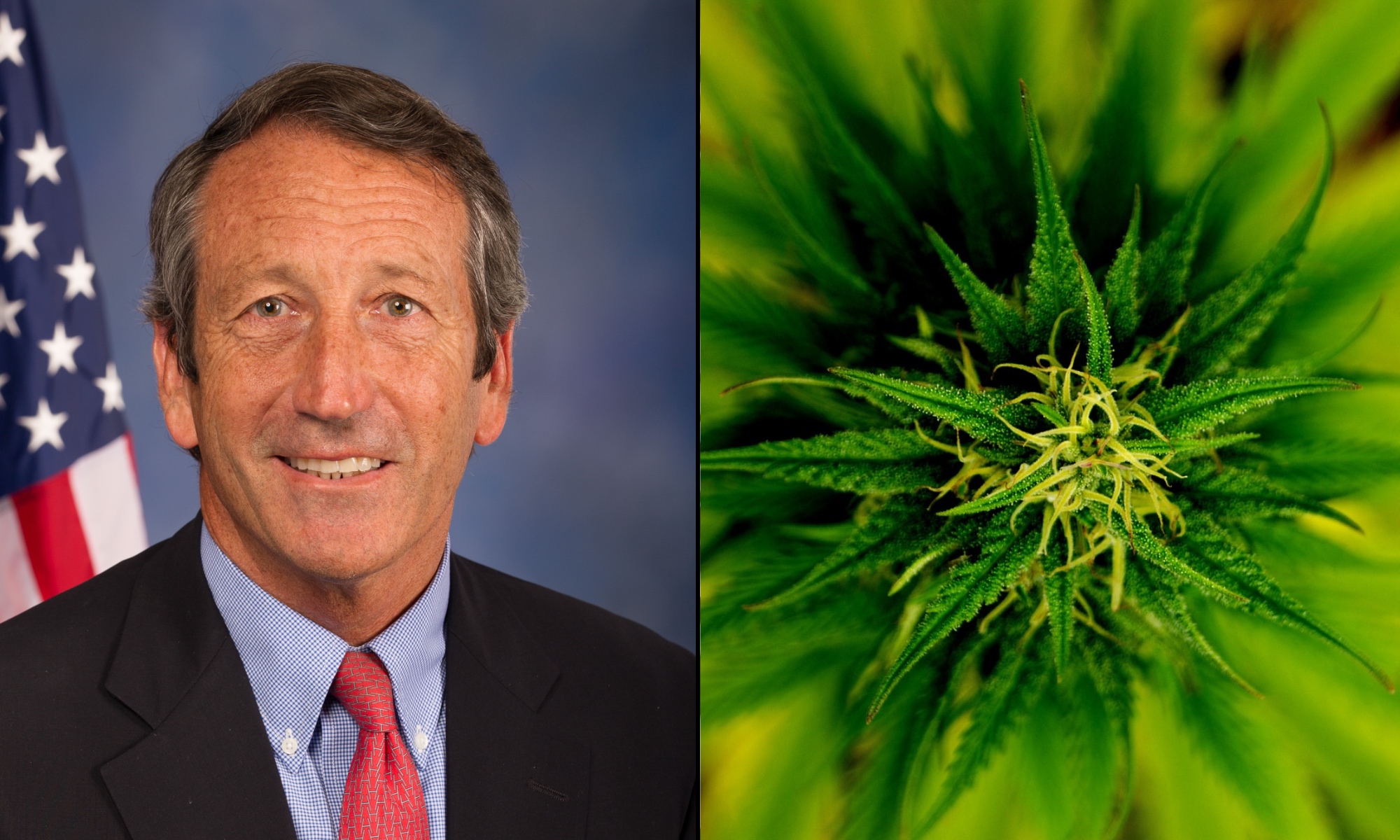 Mark Sanford, a former congressman who also served as governor of South Carolina, announced on September 8, 2019 that he was mounting a primary challenge against President Donald Trump, and he dropped out of the race on November 12.

The third candidate to enter the GOP race aside from the incumbent, Sanford’s voting record and comments on marijuana policy indicate that as president he’d be supportive of efforts to at least protect states that have legalized cannabis from federal intervention. Here’s a look at Sanford’s stance on marijuana.

This piece was last updated on November 13, 2019 to include the candidate’s statements and policy actions on marijuana since joining the race.

During his time in the House of Representatives, Sanford cosponsored five pieces of cannabis legislation—including bills to shield medical cannabis states from enforcement actions under the Controlled Substances Act.

He signed on to bills that would promote research into marijuana, legalize industrial hemp and amend the Internal Revenue Code so that cannabis businesses could access tax credits and deductions.

Sanford consistently voted in favor of House floor amendments concerning cannabis reform, with a couple of exceptions. Besides his two votes in support of protecting medical cannabis states (and one for CBD-only states) from federal interference, he was also one of 45 Republicans to back a measure that would extend that protection to adult-use states as well.

In 2014, 2015 and 2016, he supported amendments to allow doctors at the U.S. Department of Veterans Affairs to recommend medical cannabis to military veterans.

Sanford also voted for a 2014 measure to provide marijuana businesses with access to banking services.

On four occasions, the congressman voted in favor of hemp measures, though he voted against one hemp measure in 2015 for reasons that aren’t clear. There were two similar proposals on the day of the vote, with one amendment coming from a Republican that he supported and another from a Democratic that he voted against.

In another standout vote that doesn’t comport with his more recent record, Sanford voted for a resolution in 1998 that was meant to express “the sense of Congress that marijuana is a dangerous and addictive drug and should not be legalized for medicinal use.”

As governor in 2010, Sanford signed sentencing reform legislation that was meant to “reverse the trend toward incarcerating non-violent criminals who pose little or no risk to the public, discourage recidivism by providing inmates with a more closely supervised transition to society once their sentences have been served, and at the same time save taxpayers more than $400 million over the next five years.”

Though the former congressman hasn’t spent as much time and energy discussing his views on cannabis as most of the Democratic presidential candidates in the race, he has made clear that his position on the issue is informed by a federalist perspective that places emphasis on the importance of upholding states’ rights.

After then-Attorney General Jeff Sessions rescinded Obama-era guidance outlining federal marijuana enforcement priorities in 2018, Sanford took to the House floor to make a point about how the move was an infringement upon the principles of federalism.

“This is yet another example of how democracy can be hard. I guess it might be easier if a king just decided everything for us. But that’s not the American way,” he said. “We are an independent lot based on the traditions that were given to us by our Founding Fathers. Each one of us had a voice. We have a say.”

“Washington shouldn’t dictate how our coastline develops, or determine which businesses are illegal in a state like Colorado.”

In a Facebook post from 2017 about his support for legislation that would give cannabis businesses access to federal tax credits and deductions, Sanford said the “principle here is simple, if a state makes something legal…it ought to be treated on par and equally with other legal businesses in the state.”

Thirty states currently have legalized marijuana in some capacity, but because it’s classified as a Schedule I substance, small businesses in the states that sell marijuana legally are not allowed to deduct business expenses like payroll, rent, utilities, etc…

The Small Business Tax Equity Act enshrines the principle of federalism. If a state makes something legal, it ought to be treated on par and equally with other businesses in the state. https://t.co/PuGcAh5t20

The concept of federalism “very specifically applies to marijuana policy, wherein many states have legalized its medical use, and yet federal policy still works against what the states have decided,” he wrote.

“Whether you’re for or against the medical use of marijuana matters less than whether we really subscribe and adhere to the founders’ belief in federalism…because it was one of the key balancing tools to offsetting an overgrown and controlling federal government. In short, even with ideas we may not like, it’s important to adhere to federalism if you believe in limiting the size of our federal government.”

“Yeah, I voted accordingly,” Sanford said in 2017 after being asked whether he supports states’ right to legalize marijuana.

Sanford is asked if he supports states' right to legalize cannabis.

In 2015, Sanford complained about federal barriers preventing South Carolina hemp farmers from fully capitalizing on the crop after the state legalized industrial hemp.

“Industrial hemp is not a drug – it’s used as a material in paper products, textiles, and plastics,” he said. “In fact, the U.S. imports more industrial hemp than any other country in the world, but a current federal ban means that state industries are having a hard time getting off the ground.”

“I don’t believe that the federal government should be in the business of penalizing someone for following state law, and in that vein, I hope this bill becomes law,” he added, referencing federal hemp legalization legislation he cosponsored.

Following a vote on an amendment to allow banks to service state-legal cannabis businesses, Sanford again tied the issue to federalism.

“Some say that because marijuana is illegal on the federal level, and banks are federally regulated, that the federal government should use its powers under the interstate commerce clause to block banks from doing any business with these companies,” he said. “In my mind though, the genius of what our founding fathers intended, and explicitly laid out in the Constitution, was that most powers were to be left to the states and individuals rather than the federal government.”

“Whatever side of the debate you fall on for having marijuana be illegal, applying the founding principle of federalism leads me to believe that states should not be constrained by the federal government in matters that most concern their own businesses and citizens. The beauty of the great American experiment and the founding fathers wisdom in including federalism is that it allows states to pioneer on ideas. We see whether they work or fail and the ways in which they do so. It is part of what allows our Republic to innovate and change and as these amendments came to the floor last night, I couldn’t help but think we would be wise to work to preserve that concept…whether we agree or disagree with the local perspective of other states affected.”

In 2018, Sanford condemned a House vote in favor of expanding the attorney general’s authority to add drugs to the list of federally controlled substances. An example of the problem with that, he said, is that state-level marijuana legalization movement.

“I don’t know exactly where this goes, but if one believes in the principle of federalism, it’s important that an Attorney General not have sole discretion in stymying states’ efforts on this front,” he said.

He also used federalism to explain his vote in favor of a spending bill amendment granting VA doctors with the ability to recommend medical cannabis, writing that his vote “came down to one question – should the federal government be in the business of usurping all state law?”

“The beauty of the American experiment is that it included ‘federalism,’ which allows states to pioneer ideas,” he said. “Some we may agree with, others not…but the operative question in this instance is whether or not the federal viewpoint should always prevail over the view of the state.”

He made the same point in a post after voting for a similar measure in 2015.

Sanford was critical of the federal drug scheduling system in a 2016 Facebook post where he noted that cannabis oil is listed in a more restrictive category that cocaine and prescription opioids.

“This is strange given that opioid painkillers are currently causing an epidemic that kills about 50,000 Americans a year and is at such a crisis level that Congress recently passed a bill dealing with it,” he said, adding that a Schedule I classification inhibits research into the substances.

“This is a problem. A lot of people at home have contacted me about cannabis oil being part of the treatment for epilepsy and, in other cases, things like the nausea that comes with chemotherapy. Whether these things are true or not could be debated, but why would you put this drug on a list that would prevent research so that we might end the debate? Either it will help people or it won’t, but it just seems to me to be burying one’s head in the sand to say we won’t allow any research going forward to determine these things.”

Sanford has repeatedly said that he’s “never used any drug” and doesn’t want his children to use them either.

Marijuana Under A Sanford Presidency

If there’s one thing consistent about Sanford, it’s that he holds the principles of federalism in high esteem and has linked numerous votes in favor of marijuana reform to states’ rights. Though there’s not much in his record to indicate that he would necessarily embrace comprehensive legalization legislation at the federal level, it seems likely that he would oppose any federal crackdown on state-legal cannabis businesses if elected to the White House.