On Wednesday, the U.S. Department of Agriculture (USDA) gave stakeholders in the nation’s hemp economy an opportunity to provide input on rules to legally regulate the crop that are currently being developed.

Hemp, which was federally legalized as part of the 2018 Farm Bill signed by President Trump in December, had previously been restricted by the Justice Department as a controlled substance. Now USDA has primary responsibility for overseeing legal cultivation of marijuana’s non-psychoactive cannabis cousin.

But the agency is still in the process of establishing a set of regulations covering areas such as land use, certification, product testing and disposal of hemp containing excess THC. After those federal rules are in place, USDA will begin reviewing proposed hemp plans submitted by state agriculture departments.

Officials from at least seven state governments and a number of Indian tribes gave testimony during the roughly three-hour online feedback session, which was occasionally interrupted by technical difficulties, as did several hemp industry operators.

We didn’t miss the chance to chime in on the first USDA Hemp webinar this afternoon. Kentucky’s hemp program is a national leader and we are fortunate to assist @USDA in implementing the 2018 Farm Bill hemp legalization provisions. pic.twitter.com/pySeg7eb0f

All told, more than 3,000 people tuned in to the webinar to hear three-minute presentations from some 50 scheduled speakers.

The stakeholders registered concerns about testing procedures for hemp, shipping parts of the plant and its derivatives between states, access to banking and hemp’s relation to its still-Schedule-I counterpart, marijuana.

After the 2018 Farm Bill was signed into law, Kentucky’s Commissioner of Agriculture Ryan Quarles headed to Washington, D.C. to personally deliver to USDA a plan to regulate hemp, making his state the first to take formal action under the new federal legalization provisions.

“We don’t know if it can replace tobacco,” Quarles said during Wednesday’s event. “But we know it’s becoming part of our greater agriculture portfolio.”

I was proud to participate in a hemp webinar hosted by ⁦@USDA⁩ Agricultural Marketing Service. I spoke specifically about the need for USDA and FDA to work w/ states on bank lending, the regulation of CBD, & developing uniform testing standards across the nation. #KyAg365 pic.twitter.com/lwFWD46Kft

The Kentucky Agriculture Department received more than 1,000 applications to participate this year in the state’s limited industrial hemp research pilot program that is authorized under the prior 2014 Farm Bill.

As Kentucky looks toward broader industrialization, Quarles said the state is particularly concerned about hemp farmers’ access to banking.

“These farmers and companies need access to capital just like any other farmer or agri-business,” he said.

Quarles also called for guidance from the Food and Drug Administration (FDA) and Congress about what the federal government plans to do about CBD and other derivatives of industrial hemp—an area of focus for Kentucky’s hemp program.

“If the FDA regulates too hard against CBD, it would really harm small Kentucky family farms,” he said. “We’ve got to develop rules that allow our farmers an opportunity to continue supporting this crop and benefitting economically from it, especially during a period of depressed farm cash receipts.”

Sara Walling, an administrator at the Wisconsin Department of Agriculture, Trade and Consumer Protection, oversees the department where the state’s hemp program resides. She said the application period for growing hemp in the 2019 season yielded 1,461 grower applications and 711 processor applications under the state’s research program.

She described the Badger State’s relation to hemp as “enthusiastic and energetic” but said there is still some confusion among state regulators about how to proceed.

We talked to the USDA today about what we'd like to see in federal rules for industrial hemp programs. Testing and finances were uppermost in our minds. Read more at https://t.co/MNA8xEUQAP. pic.twitter.com/fClANxxb1q

“We’re optimistic about the future of hemp as an agricultural crop but we’re in a chicken-and-the-egg process: Which comes first, processing or production?” she said.

At least six representatives from groups of indigenous people described their visions for a regulated and equitable industrial hemp program. Angie Kennedy, of the Seneca Nation of Indians, sought clarification on how tribes and sovereign nations can participate in the 2019 planting season. The 2018 Farm Bill allows continued planting of hemp under the earlier 2014 legislation’s research provisions.

“But the 2014 Farm Bill, it does not allow that [tribes] can grow under those requirements,” she said. “When the USDA comes out with the regulations, it’ll be too late for this farming season.”

That concern was echoed in other speakers’ remarks as well.

Ben Fenner, an attorney with Fredericks, Peebles & Morgan LLP, spoke on behalf of the tribal attorney for the Flandro Sanchi Sioux Tribe in North Dakota. Fenner said that as more hemp is cultivated, tribes cannot afford to miss out on access the market.

“Delaying this out to 2020 or beyond is going to hurt tribes,” he said. 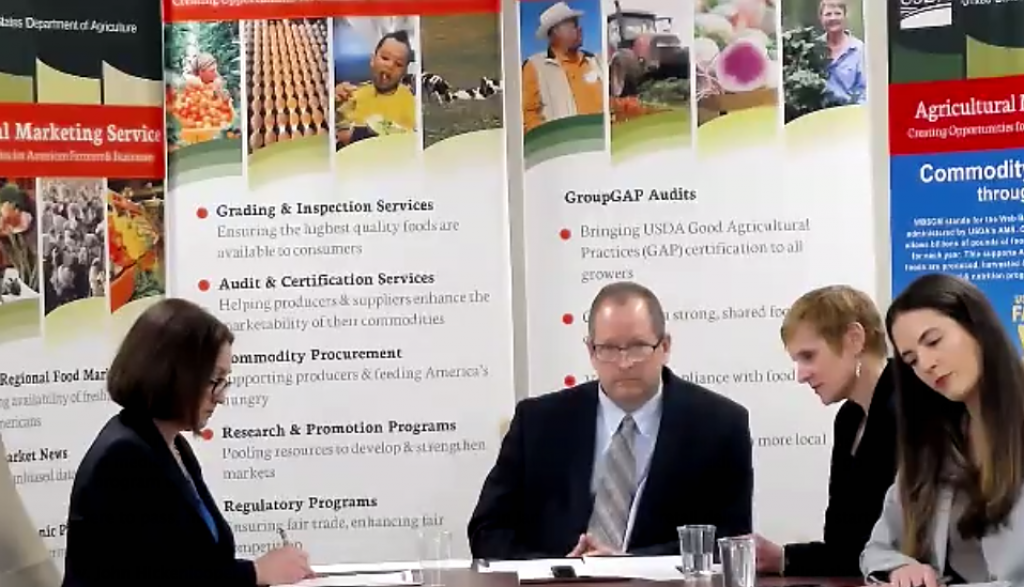 Wednesday’s listening session also included testimony from groups that transport hemp and related products, along with vendors that sell the goods.

Federal regulations for interstate transportation of hemp have not yet been issued and, while the federal agriculture legislation covers the whole nation, hemp production and processing is still illegal under the laws of some states.

Collin Mooney is the executive director of the Commercial Vehicle Safety Alliance, which represents the local, provincial, state and territorial agencies responsible for commercial motor vehicle enforcement throughout the U.S., Mexico and Canada.

“States will need to make the necessary regulatory changes and to make officials aware of those changes,” Mooney said.

Aside from changing the legal status of hemp, Mooney said the roadside enforcement community would face other challenges. While industrial hemp is defined federally as cannabis that is comprised of 0.3 percent or less of THC, it can look and smell similar to marijuana, and available field kits only demonstrate whether THC is present in a sample, regardless of the concentration.

“Since the state drug labs that can make this distinction already have a backlog of work, this can lead to unavoidable delays in traffic stops and maybe even mistaken arrests,” Mooney said.

Regardless of the legal challenges of transporting hemp and hemp products, Peter Matz of the Food Marketing Institute, a lobbying group that represents grocery stores and pharmacies around the country, said the demand for these products is “already pretty staggering, and we know that it’s growing.”

“The fact remains that our members are seeking clarity on everything—which kinds of products can be sold and where, as well as the labeling requirements, as well as sourcing and transporting the ingredients,” he said.

Until USDA’s rules are formalized, hemp farmers are still able to grow under their respective state’s hemp research pilot programs under the 2014 Farm Bill.

Secretary of Agriculture Sonny Perdue said last month that his agency is working to create the new regulatory framework by the 2020 growing season.

“We’re proceeding very judiciously obviously because of the uniqueness of the crop hemp and its relationship to other crops that we’re not encouraging. It’s complex,” he told the House Agriculture Committee.

Dr. Scott Gottlieb, outgoing head of the FDA announced that his agency will hold a similar listening session next month to discuss plans for regulating hemp-derived CBD. FDA is considering pathways to allow cannabis and its derivatives in food and dietary supplements and to permit those products to be marketed and transported between states.

Bipartisan Bill Shields Federal Workers From Being Fired For Marijuana

Evan Johnson is a contributing reporter to Marijuana Moment and Heady Vermont.