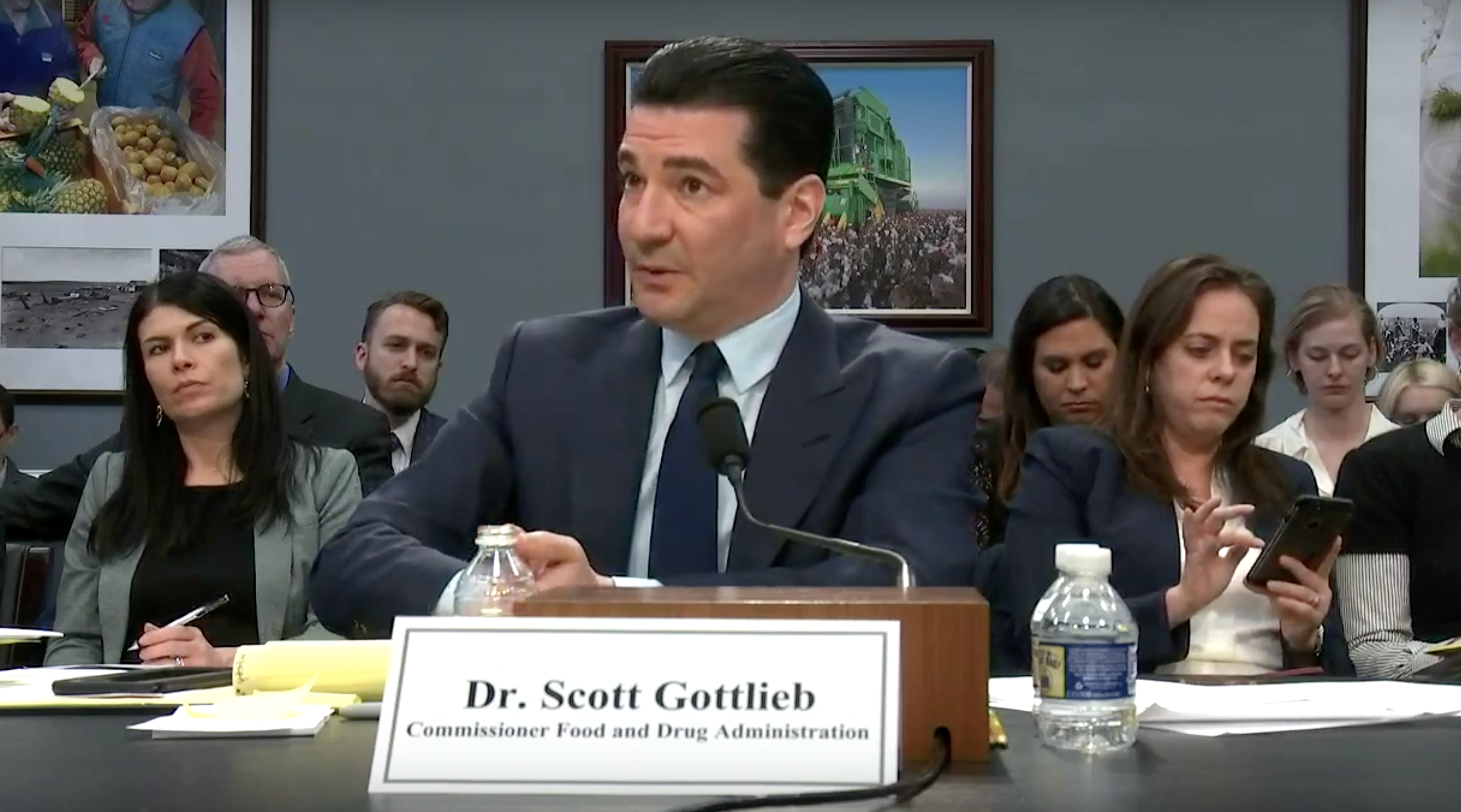 Gottlieb’s latest comments were in response to questions from Reps. Barbara Lee (D-CA), Chellie Pingree (D-ME) and Mark Pocan (D-WI) during a hearing before a House Appropriations subcommittee.

Among the revelations that came out of the hearing was that Gottlieb will shortly announce that the FDA will hold a public meeting “sometime in April” to hear from stakeholders about how to best regulate CBD derived from hemp, which was legalized late last year as part of the 2018 Farm Bill. He also said he’d be forming a working group comprised of agency experts to inform him on regulatory options for CBD.

Pocan wanted to know “how actively” the FDA was considering different pathways to regulate food and dietary supplements that contain hemp-derived CBD, and he requested a timeline for when the agency expects to release guidance on the issue.

“I’ll say at the outset that we heard Congress loud and clear with respect to that legislation,” Gottlieb said, referring to the Farm Bill. “I understand Congress wants there to be a pathway for CBD to be available.”

But he added that this “is not a straightforward issue.” Not only has the already FDA approved a CBD medication for epilepsy, Epidiolex, which generally means the compound can’t be added to food, but it’s also the “subject of substantial clinical investigation”—another reason it wouldn’t be be allowed in the food supply.

That said, “the law does allow us to go through a regulatory process and go through a notice and comment rule-making to establish a framework to allow it to be put into the food supply,” Gottlieb said. Their first step to that end will be a public meeting “sometime in April” that the agency will soon formally announce.

The commissioner offered a theoretical regulatory model that the FDA could implement for CBD.

“We believe it does have therapeutic value and has been demonstrated,” he said. “But I will tell you this is not a straightforward process. There’s not a good proxy for us doing this through regulation.”

If the task of developing an alternative regulatory approach for CBD proves “sufficiently complicated,” Gottlieb said the FDA will “come back and have a discussion with Congress about how we might be able to work together on this,” suggesting that further legislative action beyond the Farm Bill may be necessary.

Rep. Andy Harris (R-MD) briefly followed up on Pocan’s questioning and said he goes into markets and see “displays of CBD-containing products, and it’s not at the pharmacy behind the counter obtained with a prescription.”

“I think this is something that crept up on us and I appreciate your answer to Mr. Pocan on that,” Harris said.

Pingree was the lead author of a bipartisan letter that was sent to the commissioner last week, inquiring about the timeline for the FDA’s guidance on how businesses can lawfully sell hemp-derived CBD products across state lines. At the hearing, the congresswoman said she wanted to “emphasize the need for some sense of urgency” around the issue.

“I will tell you that we’re deeply focused on this. We have taken on other hard challenges before,” Gottlieb said. “I think we have a good track record of trying to come to resolution on other challenges. You have my commitment that I’m focused on this one.”

Today I asked Commissioner Gottieb about FDA's timeline and resources to develop legal pathways for food products with #CBD. He said the agency is developing a working group focused on this issue, but if it takes too long Congress may need to act. #mepolitics pic.twitter.com/l8TX0DrrVD

The commissioner said he will soon announce “a high-level working group that’s going to report to me on this, with some senior officials in the agency who are going to be chairing that.”

“I will tell you that if we make a determination that the pathway here is going to be a multi-year regulatory process that could take two, three, four years, I will come back to Congress to have a discussion about whether or not there are other frameworks that could help address this,” he said.

Further, the FDA may “need statute that either addresses this as a whole framework or address CBD specifically.”

Lee, who became the first woman and first person of color to co-chair the Congressional Cannabis Caucus in January, said she was excited to have the opportunity to speak about two of her favorite subjects: “Cuba and cannabis.”

For the latter, she focused on the FDA approval of Epidiolex. Specifically, she wanted to point out that a UK-based pharmaceutical company was awarded the drug approval because the UK government licenses them “to privately grow strains of cannabis for the purpose of drug development.”

“Is it possible under our US federal system, Schedule I, can a U.S.-based company similarly bring a plant-derived cannabis-based drug to market via the traditional FDA review and approval process?” Lee asked. “Because so many states now have passed medical marijuana initiatives and it’s a shame that we haven’t been able to move forward with the research.”

He added that it remains an “active question” as to whether hemp-derived CBD was legalized under the 2018 Farm Bill, which would mean the compound “can be studied in a more fluid fashion.” (Some experts don’t see this as an open question, however, as the agriculture legislation did remove hemp-derived products from the Controlled Substance Act.)

The commissioner said he has his “own personal opinion” about the issue but said his lawyers wouldn’t want him to give a “legal opinion.”

“I think we’re going to have a resolution on that very soon about whether or not the CBD derived from hemp doesn’t fall under the scheduling process,” he said.

Finally, Gottlieb conceded that existing federal marijuana laws mean that “the ability to conduct research on marijuana is more restricted, more heavily regulated.” While he said he didn’t know “all of the nuances” around it, one problem is that there’s only one federally authorized marijuana manufacturer in the United States, and that lack of supply has driven some researchers to conduct studies in other countries.

“Over the years, you have seen, in all candor, companies go overseas to conduct research with foreign-grown product that is more easily sourced for the purposes of clinical trials,” he said. “I think the issue you’re getting at is a valid one. The only thing I can say is that the environment here is changing quickly.”