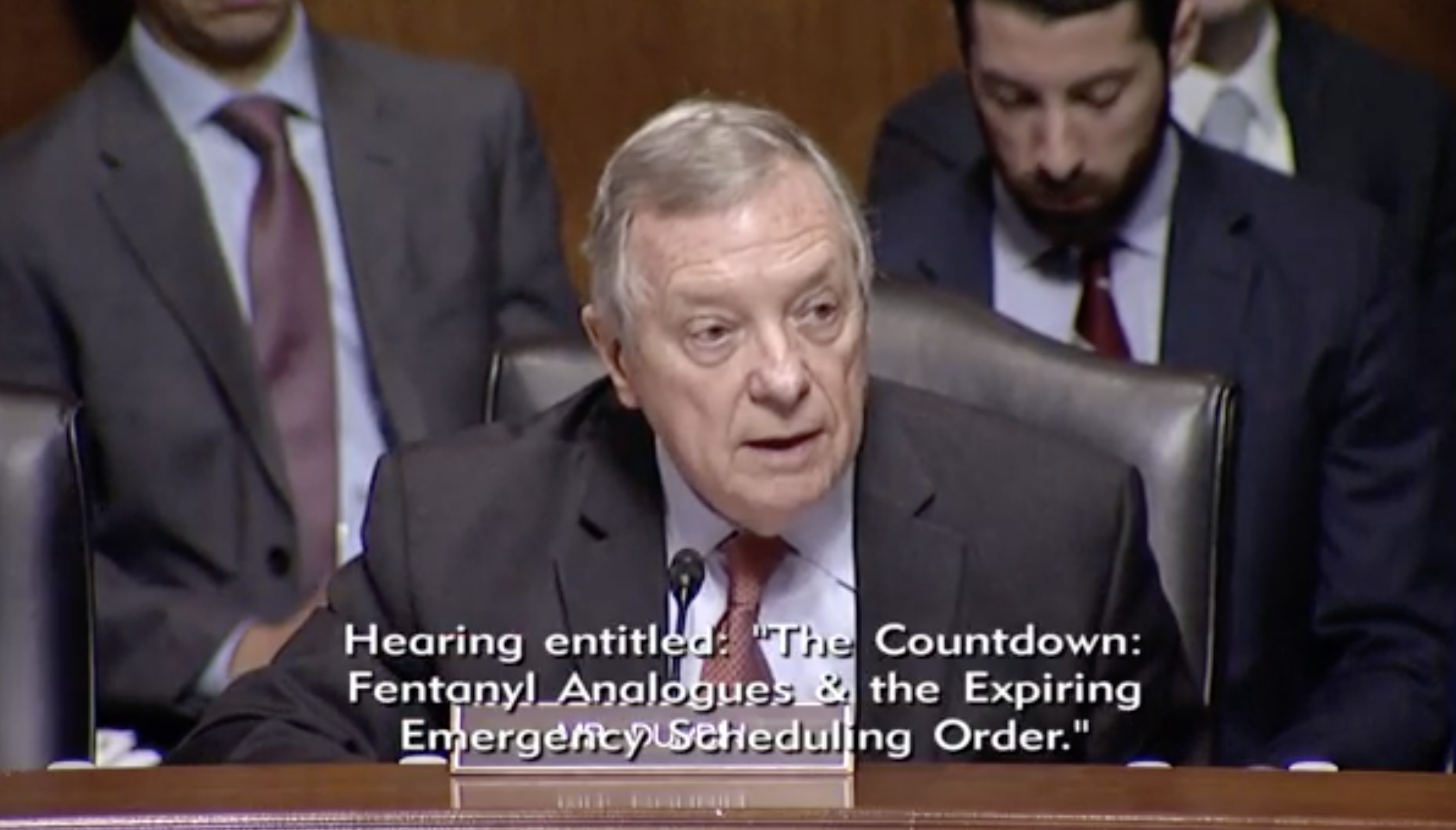 A top-ranking Democratic senator called into question the therapeutic value of marijuana on Tuesday while also making a broader point about how the federal drug classification system inhibits medical research.

Sen. Dick Durbin (D-IL) made the comments during a Senate Judiciary Committee hearing on the opioid epidemic and federal moves to restrict powerful fentanyl analogues.

Before getting into his views on the potential consequences of permanently placing those opioids in Schedule I of the Controlled Substances Act (CSA), Durbin, the Senate Democratic whip, took a hit at medical cannabis.

“My state just decided in the last few days to make marijuana legal in my state for recreational purposes, starting January 1,” he said, referencing the passage of a cannabis legalization bill through the Illinois legislature last week. “We’ve had medical marijuana. I’ve been to one of those clinics. It was almost a laughing matter.”

“The medical claims they make about marijuana go way beyond anything that’s been proven,” he said. “There are no clinical trials going on.”

Watch Durbin’s medical cannabis comments around 1:00:00 into the video below:

Durbin’s views on medical cannabis and marijuana reform in general are at odds with those expressed by many of his Democratic colleagues—not to mention a majority of voters. He said earlier this year that he opposed criminalizing cannabis use, but he cautioned against the other “extreme” of legalizing the plant.

“Senator Durbin’s comments surrounding the efficacy and therapeutic benefits of cannabis are ignorant at best and cruel at worst,” Justin Strekal, political director of NORML, told Marijuana Moment. “There are over 30,000 peer-reviewed studies hosted on pubmed.gov on the effects of cannabis, including many showing declines in cases of opioid abuse and overdose fatalities.”

“If Mr. Durbin is serious about addressing the opioid crisis, then he ought not to disparage the role or lives saved that legal marijuana can play,” Stekal said.

Michael Liszewski, principal of The Enact Group, a lobbying and consulting firm that focuses on cannabis, told Marijuana Moment he agrees that the “Schedule I status has prevented more robust medical cannabis research,” but that “it’s disappointing that Senator Durbin is characterizing it as a ‘laughing matter.'”

“To imply that patients need to look sick enough in order to obtain relief from medical cannabis ignores at least two points: First, many ailments that are treated by medical cannabis are not readily visible to observers, such as Crohn’s, lupus, and PTSD (all of which are qualifying conditions in Illinois). And second, it ignores the very real possibility that these individuals look healthy because their medical cannabis therapy is providing them with benefit.”

“Senator Durbin’s comments about the medical cannabis program in Illinois are an insult to the thousands of people in his state’s program who use cannabis as a life-saving medicine,” he told Marijuana moment.

“Ignoring the fact that there are nearly 400 [National Institutes of Health] supervised clinical trials on cannabis either underway or recruiting participants, and comparing cannabis to fentanyl analogues, is disingenuous, ill-informed, and dangerous for public policy,” Mangone said.

While the senator was dismissive of medical cannabis at the hearing, arguing that we “are not establishing whether marijuana is in fact medically appropriate in so many circumstances where they claim they are,” he also said that the Schedule I status of cannabis is the reason, in his view, that evidence about its therapeutic benefits of cannabis is insufficient.

“Why don’t they [research cannabis]? Because we’ve moved marijuana to Schedule I—the same place we’re about to move all fentanyl analogues,” he said.

“Under a blanket Schedule I framework, which is being asked for today, we could imperil research into more powerful naloxone—a stronger and better treatment to save lives of those who have used fentanyl analogues,” he added. “Is that what we want to do? I don’t think so.”

Liszewski said there “simply was no need for the senator to slander medical cannabis therapy while making his valid point about how Schedule I status harms medical research.”

Durbin later questioned the Drug Enforcement Administration’s opioid production quota, stating that there’s no need to manufacture such a high volume of prescription painkillers. In one of his closing remarks, he made a play on a Reagan-era anti-drug message.

It’s time to say no,” he said. “Just say no—to pharma when they want that kind of production.”

Though the senator made his thoughts on the scheduling system clear, he’s so far declined to sign on to legislation that would amend the issue, by rescheduling or descheduling cannabis. In fact, Durbin has only cosponsored two marijuana-focused bills over the course of his 36 years in Congress to date.

One would have required the DEA to conduct clinical trials on cannabidiol (CBD) and later determine whether the compound should be a controlled substance. The other would have allowed defendants in federal court cases to introduce evidence showing that any marijuana activity was in compliance with a state medical cannabis law.

Notably, during his time in the House, Durbin cosponsored the Anti-Drug Abuse Act of 1986, which included provisions that expanded the criminalization of drugs as well as a section tied to the problem he complained about at Tuesday’s hearing. That provision amended the CSA “to provide that controlled substance analogues shall be treated as a schedule I substance.”

“I appreciate Senator Durbin’s comments about limiting federal research,” Don Murphy, director of federal policies for the Marijuana Policy Project, told Marijuana Moment. “I’d feel even better about it if he channeled that energy and interest by putting his name on legislation to fix the problem”