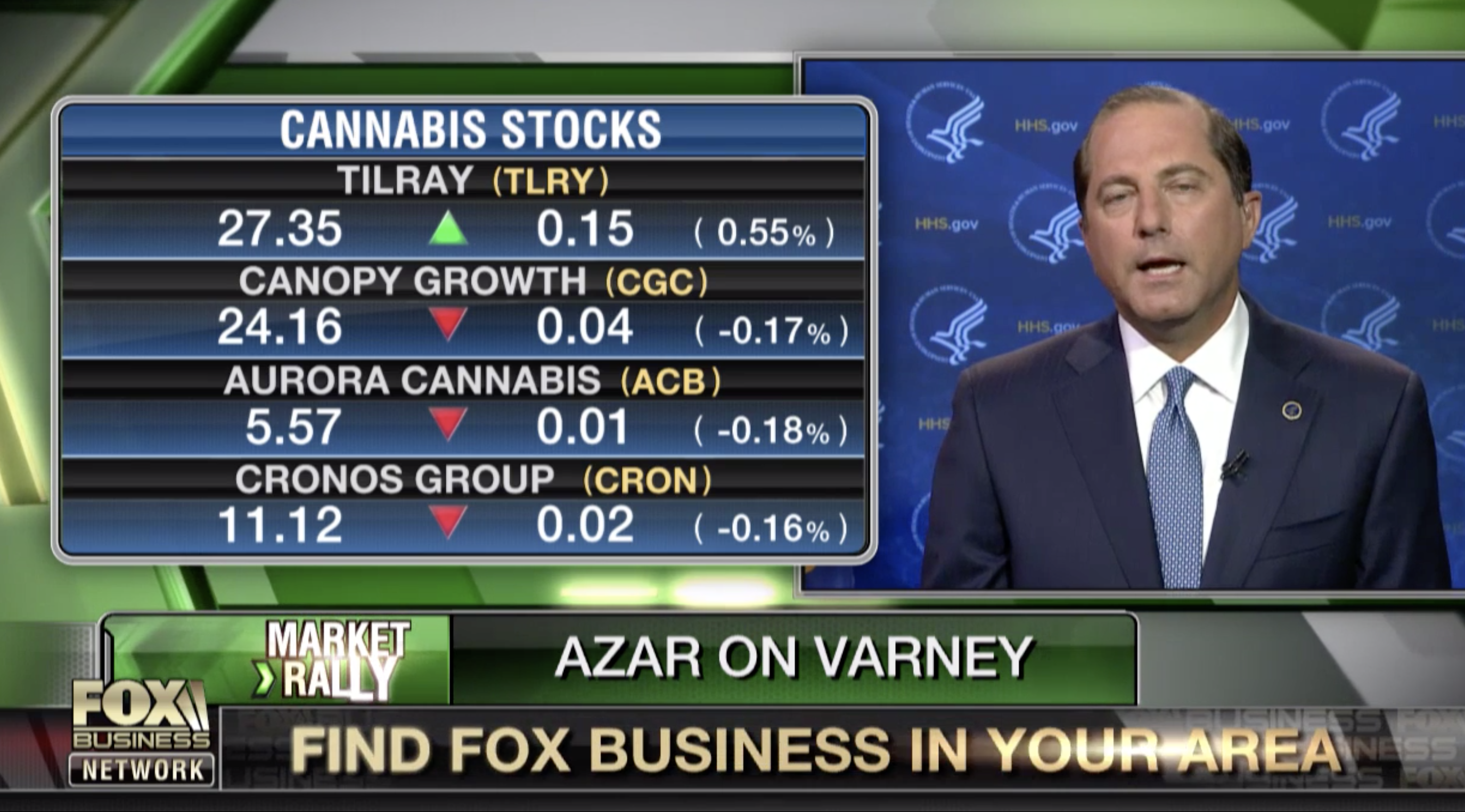 Federal health officials say that want to warn people about the risks of using marijuana, but prohibition prevents them from using a basic tool—warning labels on products—to achieve that.

Hours after the surgeon general issued an advisory expressing concern about cannabis use among adolescents and pregnant women, Health and Human Services (HHS) Secretary Alex Azar discussed the announcement in an interview with Fox Business News.

“What we’re doing is making sure that adolescents, that pregnant women and the doctors and teachers and parents who care for them are aware of the grave risks to them of marijuana use,” he said.

.@SecAzar joined @Varneyco to discuss today’s @Surgeon_General Advisory on the dangers of #marijuana to the developing brain: https://t.co/tqyHp3yfPg

“Is that warning labels?” the host asked, referring to a regulatory instrument that’s been used to warn people about the dangers of using tobacco products for more than 50 years.

“Well, because of course there’s no such thing as legal marijuana in the United States—it is against federal law—there’s also no labeling regime for illegal products,” Azar said. “This is about public health education at this point.”

He also emphasized that HHS is “the public health agency, not the law enforcement or marijuana regulating agency.”

While the public education campaign that HHS is backing, with $100,000 that was donated from the President Donald Trump’s salary, will fund digital advertisements to get their message out, it stands to reason that including warning labels that would be seen by consumers at the point of sale could have a broader and more lasting impact.

“This obviously is why we need to finish the reform of our outdated marijuana laws at the federal level. We need to allow research, we need to regulate and enforce more realistic marijuana laws to protect young people and stamp out the black market,” Rep. Earl Blumenauer (D-OR) told Marijuana Moment. “The sooner we recognize that cannabis is reform is inevitable, the sooner that doctors and patients will have the full scope of information at their disposal to find adequate care.”

“Despite a lot of misinformation and selective analysis being promoted by the surgeon general and HHS today, pretty much everything they said has bolstered the case for making cannabis legal and regulated at the federal level,” Morgan Fox, media relations director for the National Cannabis Industry Association, told Marijuana Moment. “Research, honest fact-based education, and effective public health resource allocation are all stymied by prohibition.”

“Keeping cannabis illegal does nothing to decrease the availability or popularity of this relatively safe substance, and discouraging states—as well as federal lawmakers—from regulating cannabis is the antithesis of a public health-oriented solution to potentially problematic consumption in any demographic,” Fox said. “If we want robust education and labeling, we need to get cannabis out of the illicit market and stop wasting federal resources on failed scare tactics.”

Don Murphy, federal policies director for the Marijuana Policy Project said that Azar “made a contorted statement for ending federal prohibition in support of regulation and labeling to better protect children and pregnant women from marijuana.”

“If that’s what he meant, we applaud him and look forward to his clarification and action to that end in the future,” he said.

Azar’s admission that health officials have their hands tied to that end is another example of how the federal government’s prohibition of marijuana undermines its ability to protect consumers.

The same dilemma prevents federal regulatory bodies such as the Food and Drug Administration and Environmental Protection Agency from developing and enforcing quality control standards for cannabis products, a report published in a federally funded journal last week determined.

“States have had to determine on their own how to protect millions of cannabis users [from dangerous contaminants], and they have come up with widely varying responses,” the article states. “The result is an uncertain and occasionally incoherent regulatory landscape.”

Federal officials are also facing criticism amid a spate of lung injuries that seem to be linked to vaping unregulated THC oil. Experts suspect that a contaminated batch was introduced into the illegal market, but because marijuana is federally prohibited, the federal response to the health crisis has been confused.

Marijuana labeling requirements represent another issue that’s had to be decided at the state level. Several states that have legalized cannabis, including California, require marijuana products to be labeled so that consumers are reminded that it’s for adults 21 and older only and that using cannabis while pregnant or breastfeeding “may be harmful.”

Not every legal state mandates such labeling, though, which is where some federal regulations could come into play if it weren’t for existing drug laws.

This piece has been updated to include comment from Blumenauer.