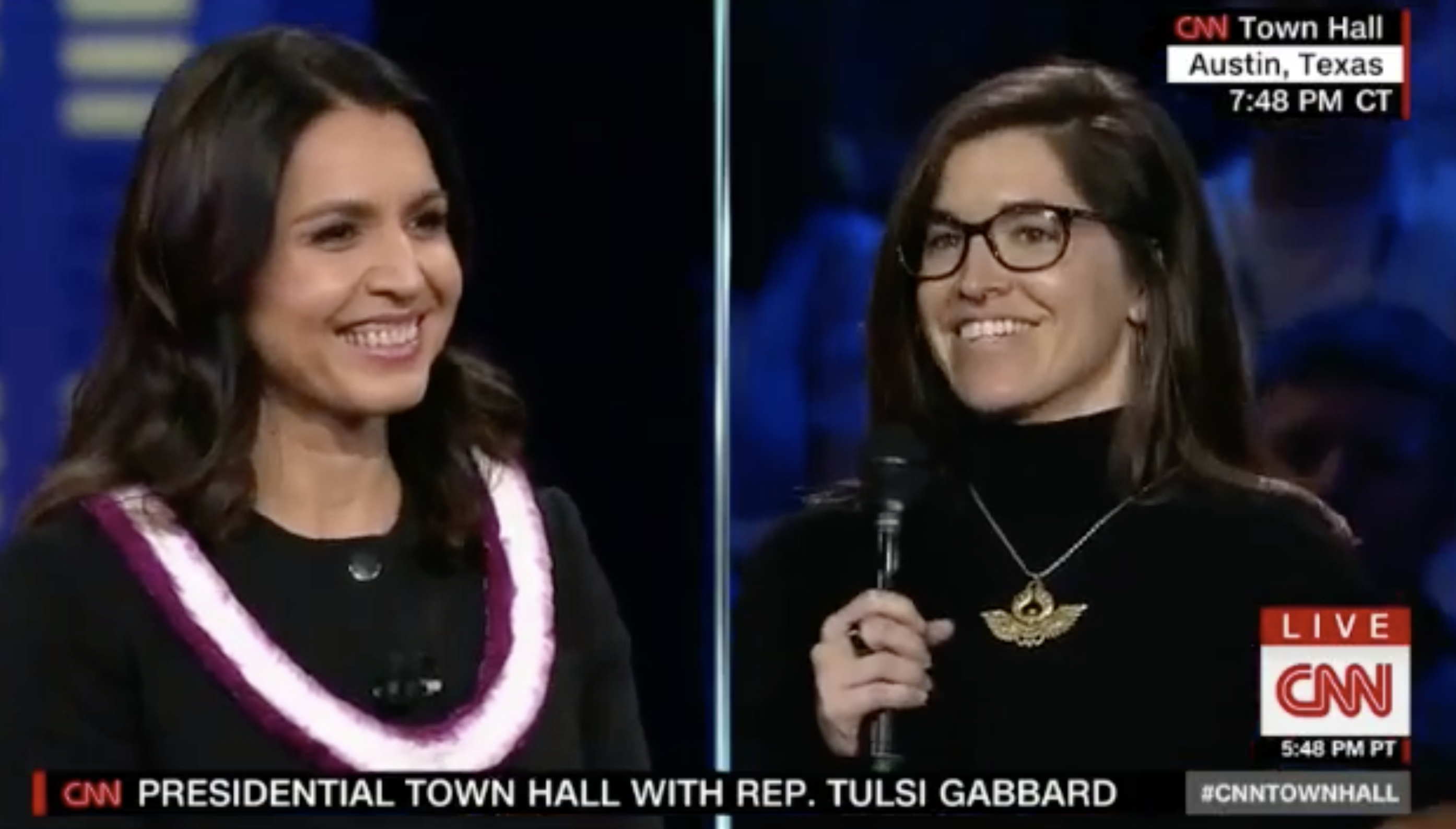 When Rep. Tulsi Gabbard (D-HI) was asked about decriminalizing all drugs during a CNN town hall event on Sunday, she didn’t rule out pursuing the policy if she is elected president next year—though she declined to explicitly endorse it.

Liana Sananda, an audience member who was described as a “drug legalization activist”—and who works for the Multidisciplinary Association for Psychedelic Studies—said substance use disorder is a national public health concern and asked the congresswoman if she would “end the war on drugs by decriminalizing all drugs and working to remove the stigma, the shame and the fear that so often prevents people from accessing the help they need.”

Gabbard, who announced that she was running for the 2020 Democratic presidential nomination in January, started by discussing a recent meeting she had with various people in recovery for drug addiction and said she admired “their strength and their resilience.”

“This is about recovery. This is about addiction,” she said. “We need to address that reality and help resolve some of the root causes of why people are turning to different substances in the first place.”

“We must end this failed war on drugs.”

Gabbard then pivoted and touted a bipartisan bill she recently filed alongside Rep. Don Young (R-AK) that would end federal marijuana prohibition by removing cannabis from the list of controlled substances.

The policy change would “have a great impact in so many ways on the opioid crisis,” she said, referencing studies that shows states with legal marijuana have fewer opioid prescriptions and opioid-related deaths on average compared to non-legal states.

CNN anchor Dana Bash, who moderated the event, picked up on the fact that Gabbard hadn’t directly responded to the audience member’s question about substances beyond cannabis and said “you’re talking a lot about marijuana, but where do you draw the line on decriminalization, because one of the questions was about all drugs.”

“I think that the heart of her question was really recognizing that this is about addiction, not criminalization,” she said. “Our failed war on drugs has turned everyday Americans who are struggling with substance abuse and addiction and turned them into criminals.”

While that response again failed to explicitly address whether Gabbard herself supported decriminalizing all drugs, it’s notable that the congresswoman didn’t draw a line in the sand when pressed, giving the impression that she is at least open-minded about the prospect.

Similarly, Gabbard hinted that a broader drug reform platform could become part of her presidential campaign in an interview with Marijuana Moment last week.

“I think that there’s no question that this overall war on drugs has not only been a failure, it has created and exacerbated a number of other problems that continue to afflict people in this country,” she said. “[T]his is something that I’m working on on my presidential campaign that we will be rolling out a detailed policy position statement on.”

For Tulsi Gabbard, Marijuana Sits At Nexus Of Good Policy And Smart Politics