Ohio marijuana activists on Monday submitted to the state what they say are enough signatures for an initiative to force lawmakers to take up the issue of legalization.

The Coalition to Regulate Marijuana Like Alcohol (CTRMLA) said it turned in petitions with 206,943 signatures to the secretary of state’s office—more than required to get the legislature to act.

This comes just four months after the campaign was initially cleared by the state to begin signature collection.

The measure that legislators would be required to consider would legalize possession of up to 2.5 ounces of cannabis for adults 21 and older, and they could also have up to 15 grams of marijuana concentrates. Individuals could grow up to six plants for personal use, with a maximum 12 plants per household.

Activists needed to collect 132,887 valid signatures from registered voters for the statutory initiative during this first phase of the effort.

If the required signatures are verified by county officials, the legislature will then have four months to adopt the measure, reject it or adopt an amended version. If lawmakers do not pass the proposal, organizers will then need to collect an additional 132,887 signatures to place the proposal before voters on the ballot in November 2022. 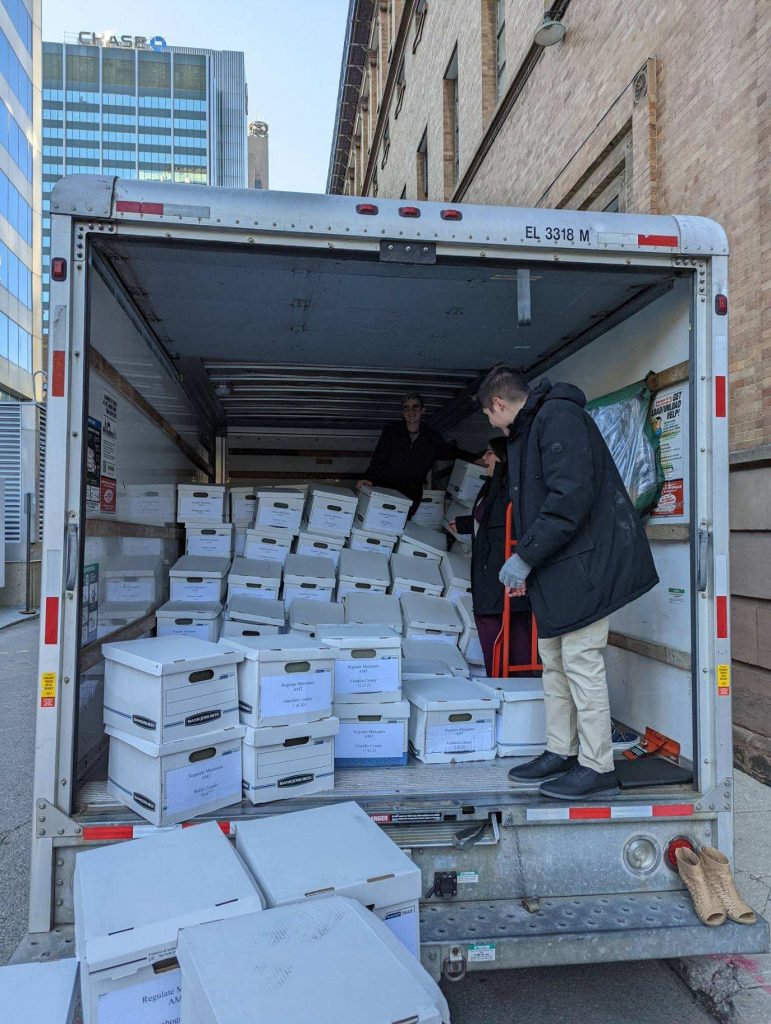 “Eighteen states have already legalized cannabis for adult use, including our neighbor to the north,” CTRMLA spokesman Tom Haren said in a press release, referring to Michigan. “Ohio is behind the curve on this issue and can’t afford continued inaction.”

Under the measure, a 10 percent sales tax would be imposed on cannabis sales, with revenue being divided up to support social equity and jobs programs (36 percent), localities that allow adult-use marijuana enterprises to operate in their area (36 percent), education and substance misuse programs (25 percent) and administrative costs of implementing the system (three percent).

Under the proposal, a Division of Cannabis Control would be established under the state Department of Commerce. It would have authority to “license, regulate, investigate, and penalize adult use cannabis operators, adult use testing laboratories, and individuals required to be licensed.”

The division would also be required to issue 40 recreational cultivator licenses and 50 adult-use retailer licenses “with a preference to applications who are participants under the cannabis social equity and jobs program.” And it would authorize regulators to issue additional licenses for the recreational market two years after the first operator is approved.

Individual municipalities would be able to opt out of allowing new recreational cannabis companies from opening in their area, but they could not block existing medical marijuana firms even if they want to add co-located adult-use operations. Employers could also maintain policies prohibiting workers from consuming cannabis for adult use.

Further, regulators would be required to “enter into an agreement with the Department of Mental Health and Addiction Services” to provide “cannabis addiction services,” which would involve “education and treatment for individuals with addiction issues related to cannabis or other controlled substances including opioids.”

With respect to social equity, some advocate are concerned about the lack of specific language on automatic expungements to clear the records of people with convictions for offenses that would be made legal under the legislation. That said, it does include a provision requiring regulators to “study and fund” criminal justice reform initiatives including expungements.

“The success of our petition drive shows just how eager Ohioans are to end prohibition and legalize the adult use of marijuana,” Haren said. “We look forward to receiving the results of the Secretary of State’s review, and are eager to begin working with legislators on this important issue.”

Ohio voters rejected a 2015 legalization initiative that faced criticism from many reform advocates because of an oligopolistic model that would’ve granted exclusive control over cannabis production to the very funders who paid to put the measure on the ballot.

Activists suspended a campaign to place another measure on the 2020 ballot due to the coronavirus pandemic.

Aside from the new voter initiative, state lawmakers from both parties are separately working to advance marijuana reform.

A legalization bill that was the first of its kind to be introduced in the Ohio legislature earlier this year would legalize the possession, sale and cultivation of cannabis by adults. It’s being championed by Reps. Casey Weinstein (D) and Terrence Upchurch (D).

A pair of Ohio Republican lawmakers similarly filed a bill to legalize marijuana in the state this month.

Reps. Jamie Callender (R) and Ron Ferguson (R) first announced their plan to push the legislative reform proposal in October and circulated a co-sponsorship memo to build support for the measure.

A recent legislative survey found that Republican lawmakers in the state are more supportive of legalizing marijuana than their Democratic colleagues are.

But leadership in the legislature, as well as Gov. Mike DeWine (R), will likely present obstacles for any recreational legalization bill that advances.

House Speaker Robert Cupp (R) laughed when he was asked about Callender’s legislation after its initial announcement, though he added, “Let’s just see where it goes. I haven’t read it yet.”

Callender said that although Republican legislative leaders and the governor are not yet on board, “there is more bipartisan support than most people would think.”

Ohio marijuana activists have also successfully proved that they turned in enough valid signatures to put a local decriminalization initiative before Kent voters after having missed the 2021 ballot due to a verification error on the part of county officials.

Separately, an Ohio bill to expand the state’s medical cannabis program—in part by allowing physicians to recommend marijuana if they “reasonably” believe it could benefit the patient—cleared the Senate last week.