The number of accounts that banks and credit unions informed federal regulators they are maintaining for cannabis businesses dipped slightly at the end of the last quarter, according to new data. But that seems to be primarily related to revised reporting requirements for financial institutions servicing hemp-specific businesses following that crop’s federal legalization, rather than a decline in the number of marijuana companies with bank accounts.

Under guidance issued by the Obama administration in 2014 that remains in effect, banks and credit unions are required to submit suspicious activity reports, or SARs, if they elect to provide financial services to marijuana businesses. As more states have legalized marijuana, the number of cannabis-related SARs filed has consistently increased, though it began to level off late last year, a federal report released this week shows.

The Financial Crimes Enforcement Network (FinCEN) reported that SARs for marijuana businesses declined from 747 as of November 2019 to 739 by the end of the following month.

While the overall number is higher than was reported in the previously quarterly data (723), the recent dip appears to coincide with updated guidance to financial institutions that FinCEN and other federal regulators issued at the beginning of December.

Those memos clarified that because the 2018 Farm Bill removed hemp from the Controlled Substances Act, banks are no longer required to automatically submit SARs for businesses that produce, process or sell the crop and products derived from it.

Some in the industry expected to see a sizable spike in the number of banks that work with marijuana firms after the House of Representatives passed a bill last year that would protect financial institutions from being penalized for doing so by federal regulators. Even though the legislation has stalled in the Senate and has not yet been enacted into law, the bipartisan margin of support it got in the House has ben seen as a signal that formal federal changes are likely on the way.

While the new data doesn’t show that expected big increase, that could be partially explained by the change in hemp’s legal status.

Of the 739 depository institutions servicing marijuana businesses, 203 “indicated that they were providing banking services to hemp-related businesses,” the agency said. Based on the language of the SARs, FinCEN said it was likely that 61 financial institutions provide services to companies that exclusively market hemp and not marijuana. 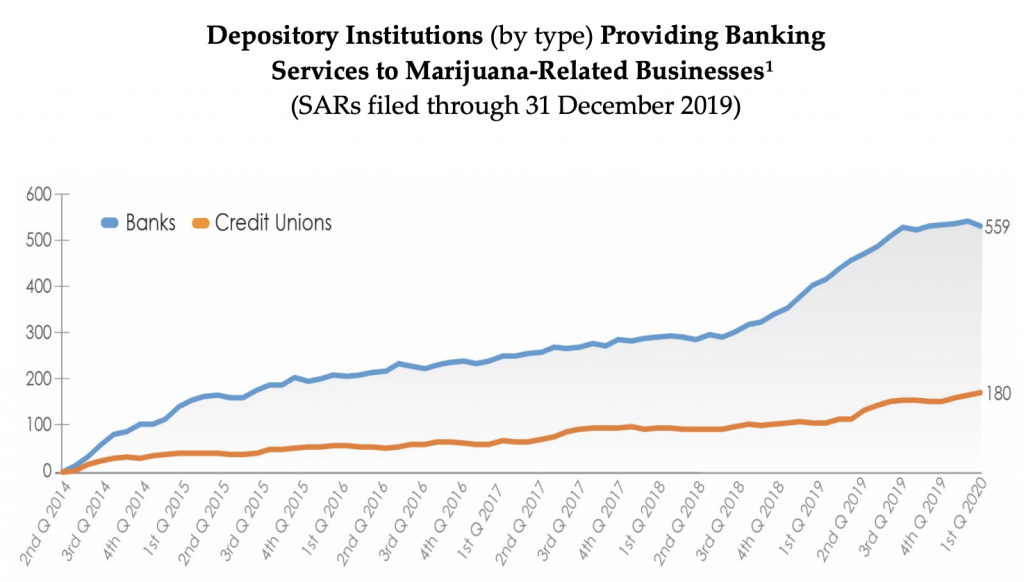 As more banks and credit unions become aware of the updated guidance on hemp reporting standards, it’s possible that fewer institutions will issue SARs for what FinCEN defines as a “marijuana-related business.”

All that said, if Congress passes the Secure and Fair Enforcement (SAFE) Banking Act, the number of financial institutions working with marijuana firms will likely increase substantially, as banks would then have the security of a codified law to protect them against adverse actions.

“Hemp-related reductions in filings aside, I think these latest FinCEN numbers continue to show that most banks are extremely hesitant to work with cannabis businesses in the absence of clarifying legislation,” Morgan Fox, media relations director for the National Cannabis Industry Association, told Marijuana Moment. “I would imagine that this problem still exists for hemp producers given the relatively small drop in banks filings SARS that is attributed to changes in filing requirements for hemp-related activity.”

“This level of banking access does not come close to fulfilling the needs of regulated cannabis businesses or their employees, and ensures that issues we are seeing with public safety and lack of access to capital for small businesses will continue,” he said. “The Senate must act now to remedy these problems, and it can start by holding a markup on the House-approved version of the SAFE Banking Act in the Senate Banking Committee as soon as possible.”

Sen. Cory Gardner (R-CO), a lead sponsor of the bill, said last week that he expects the Senate to take it up within months and revealed that lawmakers are “close” to reaching a compromise with Banking Committee Chairman Mike Crapo (R-ID), who has proposed several restrictive changes to the House-passed legislation.