New Mexico’s House of Representatives passed a bill to legalize marijuana for adult use on Thursday.

After getting a favorable report from two House committees last month, the legislation cleared the full chamber in a narrow 36-34 vote, but not before being significantly amended from its original form. 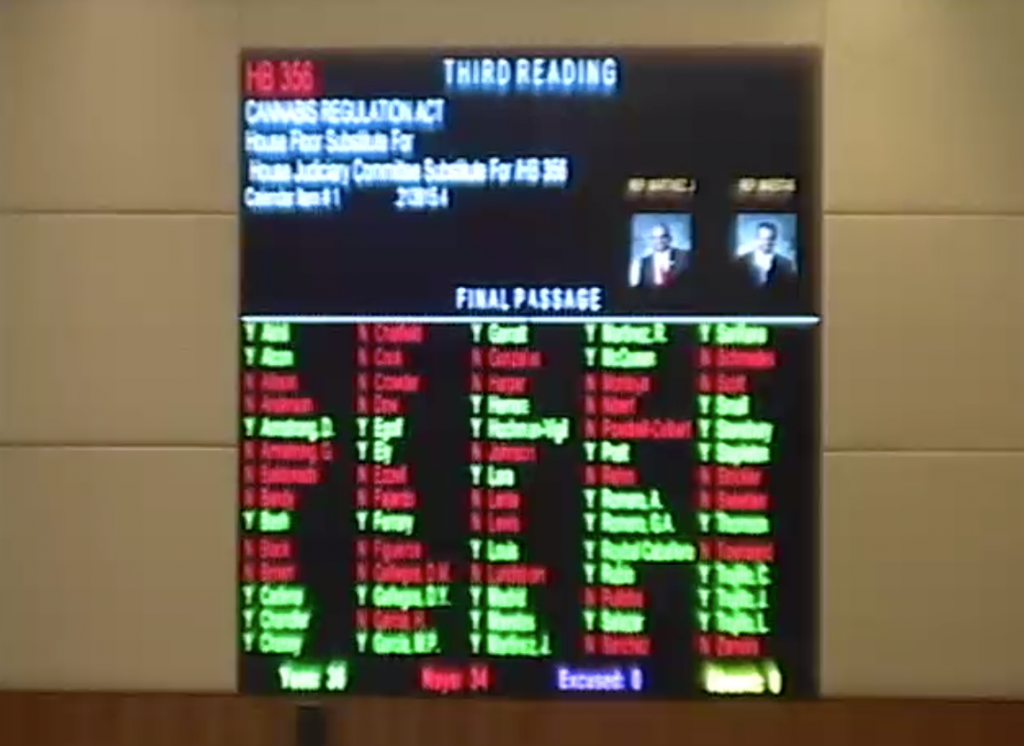 Sponsored by Reps. Javier Martinez (D) and Antonio Maestas (D), the bill would establish a retail cannabis system in the state and would automatically seal previous records of individuals with convictions for marijuana offenses that are made legal by the bill.

Before final passage on the floor, Martinez offered a compromise substitute version of the bill that its sponsors worked out with Republicans “in the spirit of bipartisanship.”

✅PASSED: House Bill 356 has passed the House of Representatives — the first time in history that the House has passed recreational cannabis legalization. #nmleg #nmpol

“We have what could potentially be a watershed moment in the recreational use of cannabis legalization movement,” he said, noting the bipartisan nature of the amended proposal.

The new version merges in ideas from a separate Republican-backed bill in the New Mexico Senate that would have the state government directly run cannabis shops. The proposal was approved by the body’s Public Affairs Committee last month, but has not yet been scheduled for floor action in that chamber.

Under the compromise approved by the House, marijuana stores would generally be run by a new state regulatory commission. In areas where there isn’t a government-run retail operation within 25 miles, private sellers could be licensed.

Notably, the amended bill also requires that cannabis consumers maintain a receipt of sale for marijuana they possess. Those found without the receipts could face criminal charges, Martinez said when describing the changes.

The initially proposed legal possession limit of two ounces was lowered to one ounce.

And, unlike the original House legislation, the new version does not allow for home cultivation of recreational marijuana. Patients would still be allowed to grow their own medical cannabis, however.

The Departments of Agriculture, Environment and Health would have varying regulatory responsibilities.

Marijuana tax revenue would be directed toward a grant fund for research into marijuana, public education campaigns, community grants for workforce training and substance abuse and mental health treatment.

In the first year, #cannabis legalization is projected to generate 11,000 jobs and more than $70 million in tax revenue. #nmleg #nmpol

“New Mexicans are with us on this issue,” Martinez said in floor remarks prior to the vote, referring to polling data showing that a majority of the state’s voters support legalizing marijuana.

“For 50 years we’ve waged the war on drugs with pretty poor results.”

He also spoke about growing up near the U.S.-Mexico border and “seeing narco culture all around me.”

“At a young age I realized how big an enterprise that was,” Martinez said, referring to drug cartels that would stand to lose profits once the marijuana market is legal and regulated.

Maestas said that the state-run stores in the compromise bill might be the “most responsible way” for regulating marijuana sales that has yet been tried in the U.S.

“Folks have been waiting 82 year for this vote,” Maestas added. “Prohibition does not work. We must prosecute the war against drugs differently than we are now.”

“Let’s end 82 years of a crime that should have never been on the books.”

Gov. Michelle Lujan Grisham (D) championed marijuana legalization during her gubernatorial campaign last year and would likely sign the bill if it is passed by the Senate.

On Tuesday, that chamber passed a separate bill to decriminalize low-level cannabis possession and on Thursday approved legislation to expand the state’s medical cannabis law.

“Tonight’s vote on the House floor was historic,” Emily Kaltenbach, New Mexico director for the Drug Policy Alliance said in a press release. “Not only did legalization of cannabis pass a NM legislative chamber for the first time in our state’s history, it was a bi-partisan effort. Cannabis reform was an issue that was untouchable just a few years ago. After tonight’s debate, I’m even more optimistic this bill has a path to the Governor’s desk.”