About seven in 10 Americans say that marijuana should be legalized—including majorities of all political parties and age demographics—according to the latest Gallup poll released on Tuesday.

A week after midterm elections that saw two more states legalize cannabis for adult use, Gallup’s survey shows that public support has held strong, with 68 percent of Americans agreeing that “the use of marijuana should be legal,” compared to 31 percent who said it should remain prohibited. 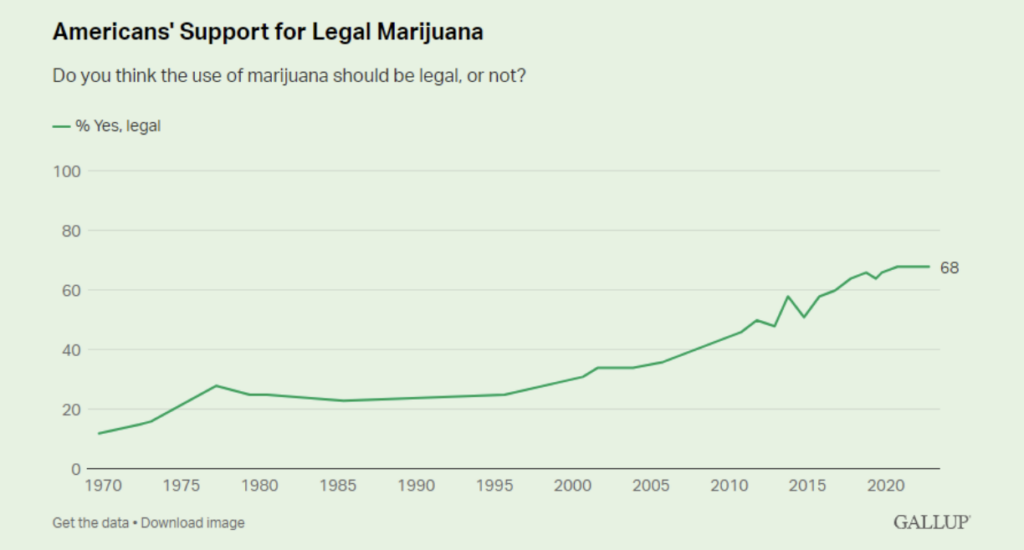 Support has stayed the same since the last two times the research organization conducted a survey on the issue last year and in 2020. Opposition dropped off by one percentage point from 2021, however, from 32 to 31 percent, with one percent now saying that they have “no opinion” on the issue.

The poll—which involved interviews with 1,009 Americans from October 3-20, with a +/-4 percentage point margin of error—also reflects the growing, bipartisan popularity of marijuana reform.

There was majority support among people from all sides of the political spectrum, including 84 percent of Democrats, 73 percent of independents and 51 percent of Republicans.

68% of U.S. adults think the use of marijuana should be legal, unchanged from 2020 and 2021 and tied for the highest in Gallup’s polling history. https://t.co/h7k2JeCvyX

“Marijuana is overwhelmingly popular amongst voters under 45 and the older prohibitionists are dying daily,” Justin Strekal, founder of the BOWL PAC, told Marijuana Moment. “It is becoming clearer every year that Republican politicians will be forced to reverse their prohibitionist ways or face even more defeats at the ballot box in the future.”

Gallup has been surveying Americans about legalization since 1969, when just 12 percent of respondents said that they oppose prohibition. Support has gradually increased since then, and it’s risen demonstrably in the years since states started individually legalizing marijuana.

Notably, a person’s level of educational attainment and the geographic region where they live are two factors that “do not have meaningful relationships with marijuana attitudes,” the firm said in its latest analysis.

“Americans have grown much more supportive of legalizing marijuana over the past two decades, but support appears to be leveling off for now, not showing any change in the past three years,” Gallup’s Jeffrey Jones wrote.

“While majorities of most major subgroups are in favor of legalizing marijuana, there are a few holdouts—namely, political conservatives and regular churchgoers,” it says.

That said, the firm indicate that demographic trends indicate that the share of the population that backs legalization will increase in the future.

“Small segments of the population (in particular, older conservatives) are still disinclined to think marijuana use should be legal. However, younger conservatives and younger moderates are more inclined than their older counterparts to think cannabis should be legal. As such, in future decades support for legalizing marijuana can be expected to continue to grow as newer, likely more pro-marijuana, generations replace older generations in the U.S. population.”

In an effort to provide more robust data, particularly when it comes to where various demographic subgroups stand on the issue, Gallup did something differently this round by analyzing aggregated findings from five years of polling, from 2018-2022.

That dataset showed average support for legalization at 67 percent for the general population, but opinions “varied significantly by subgroup.” 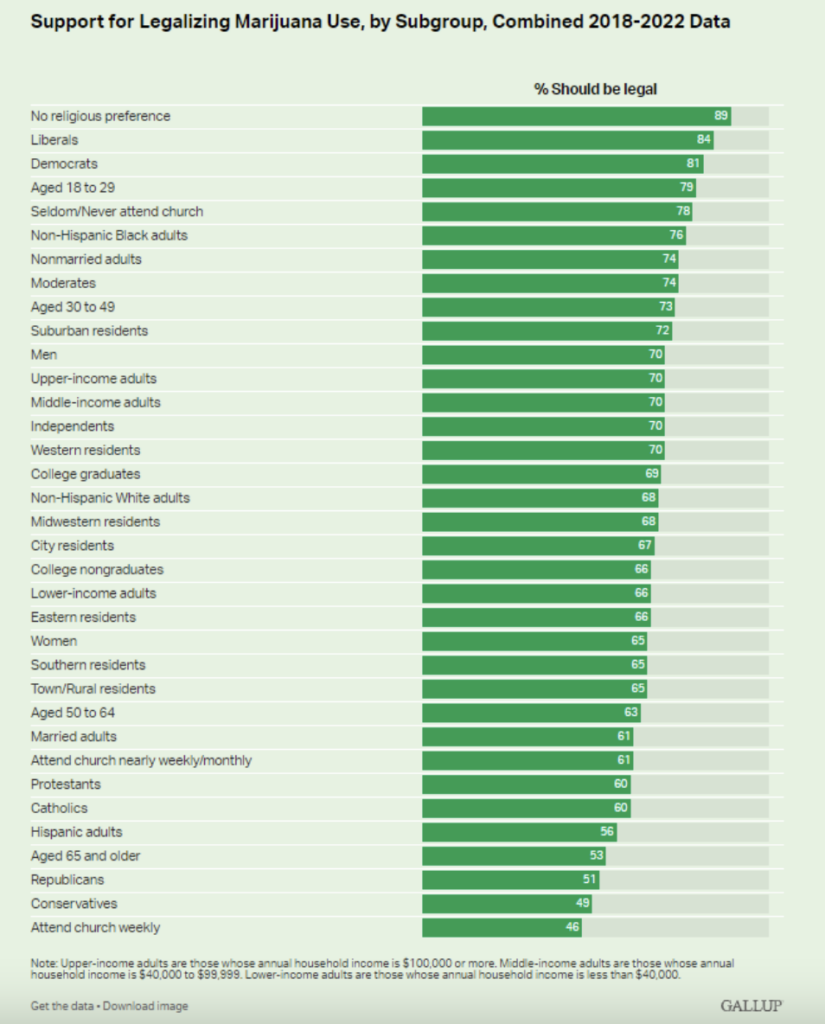 “Specifically, subgroups whose support for legalization exceeds the national average by 10 or more percentage points include those with no religious preference (89 percent), self-identified liberals (84 percent), Democrats (81 percent), young adults (79 percent) and those who seldom or never attend religious services (78 percent),” the analysis says.

“Groups whose support is at least 10 points below the national average include those who attend church weekly (46 percent), conservatives (49 percent), Republicans (51 percent), older adults (53 percent) and Hispanic adults (56 percent),” it continues.

“A statistical analysis that takes into account the influence of multiple respondent characteristics simultaneously confirms that ideology, religiosity, age and party identification are the most important predictors of marijuana attitudes. The model indicates that ideology is slightly more influential than the other variables.”

The aggregated data collectively involved a sample of interviews from 5,412 Americans, with margin of error of just +/-1 percentage point.

The findings and demographic trends from this latest survey are generally consistent with past polling on the issue, including one that was commissioned by Fox News and the Associated Press and conducted in the lead-up to the election that found 63 percent support for legalization nationwide.

Interestingly, that survey also found majority support for ending prohibition among voters in two states that rejected legalization initiatives last week, signaling that the measures might have failed in part because of disagreements about specific provisions rather than the basic concept of legalization.

A poll released last month also shows that a majority of Americans are in favor of President Joe Biden’s decision to grant pardons to people who’ve committed federal marijuana possession offenses, and most also want to see their own governors follow suit with state-level cannabis relief.

Most Americans don’t think marijuana is dangerous despite efforts by legalization opponents to cast the plant in a negative light, another recent survey showed.

With respect to Gallup, the firm separately released data in August that found more than twice as many Americans think that cannabis has a positive impact on its consumers and society at large than say the same about alcohol.