With cannabis legalization on track to be on Missouri’s November ballot, a newly released poll indicates strong support in the state. Of those surveyed, 62 percent said they support legalizing marijuana, while 25 percent said the drug should remain illegal. Another 13 percent said they weren’t sure.

Support for legalization was strong across party lines. Though majorities of Democrats and independents have long favored the policy change more than Republicans, the new poll also that more GOP voters support legalization (49 percent) than oppose it (38 percent).

The survey comes on the heels of activists at Legal Missouri 2022 earlier this month turning in what they said are more the double the required number of signatures needed to qualify a legalization initiative. Provided the signatures are validated by elections officials, the measure would go before voters in November. 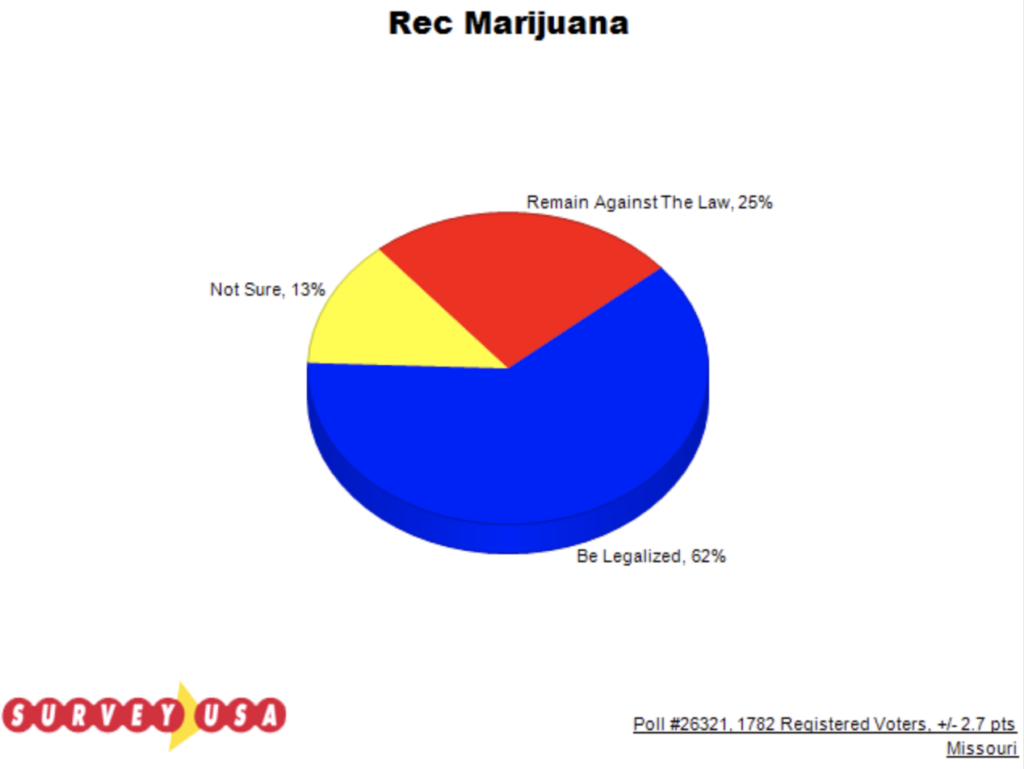 The new SurveyUSA poll, conducted on behalf of TV stations across the state between May 11 and May 15, asked 2,175 Missouri adults questions about various policy issues, including law enforcement and public schools.

On aggregate, a greater proportion of men (66 percent) than women (58 percent) said they support legalizing marijuana. Younger respondents, such as those in the 18-34 and 35-49 age groups (both of had 71 percent support) were also more likely to favor the policy change than older groups in the 50-64 (59 percent) or 65+ (46 percent) age groups.

Black and white respondents showed near-equal levels of support for legalization, at 62 percent, but white people also were more likely than Black respondents to say cannabis should remain illegal (27 percent and 14 percent, respectively). Among people who said they belong to another racial group, 57 percent favored legalization, 19 percent opposed it, and 24 percent—more than any other group—said they weren’t sure.

The only groups that had more people opposing legalization than in favor were those who identified as “very conservative” or who said abortion should always be illegal.

The campaign manager for the adult-use legalization push, John Payne, previously led the successful 2018 ballot effort in Missouri to legalize medical cannabis. If Legal Missouri 2022’s proposal becomes law, it would allow all adults 21 and over to possess and consume cannabis.

Legal Missouri 2022’s initiative is backed by the Missouri Medical Cannabis Trade Association as well as ACLU of Missouri; St. Louis City, St. Louis County and St. Charles County chapters of the NAACP; NORML chapters in the state and Missouri Association of Criminal Defense Lawyers. However, certain advocates and stakeholders have pushed back against the campaign.

Some advocates and stakeholders have raised concerns about the largely industry-funded proposal and pushed for legislative reform instead, like a legalization bill from Rep. Ron Hicks (R). That measure moved through the committee process, but failed to advance to a floor vote before the session adjourned on May 13.

Critics of the proposed initiative say its lack of language specifically prohibiting a licensing cap on businesses means that any market that emerges will be neither open nor competitive. Some have also raised concerns about the measure’s provisions to give medical cannabis dispensaries a head start in serving the adult-use market.

While Legal Missouri 2022’s measure appears to be headed for the ballot, those advocates aren’t the only ones who’ve called for legalization be decided by voters. Rep. Shamed Dogan (R) also introduced a GOP-led joint resolution this session that sought to put the matter on the state ballot. That measure cleared a House committee as well but did not see floor action.

A different campaign, Fair Access Missouri, separately explored multiple citizen initiatives this year with the hopes of getting at least one on the ballot.

Also this year, Republican Rep. Jason Chipman (R) filed a joint resolution this session that would let voters require additional oversight over how medical cannabis tax revenue is distributed to veterans. And another state lawmaker filed a bill late in February to decriminalize a range of drugs including marijuana, psilocybin, LSD, MDMA and cocaine.

In March, a Missouri House committee held a hearing on a GOP-led bill to legalize a wide range of psychedelics for therapeutic use at designated care facilities while further decriminalizing low-level possession in general.

Nearly 1 in 10 jobs that created in Missouri last year came from the state’s medical marijuana industry, according to an analysis of state labor data that was released by a trade group last month.