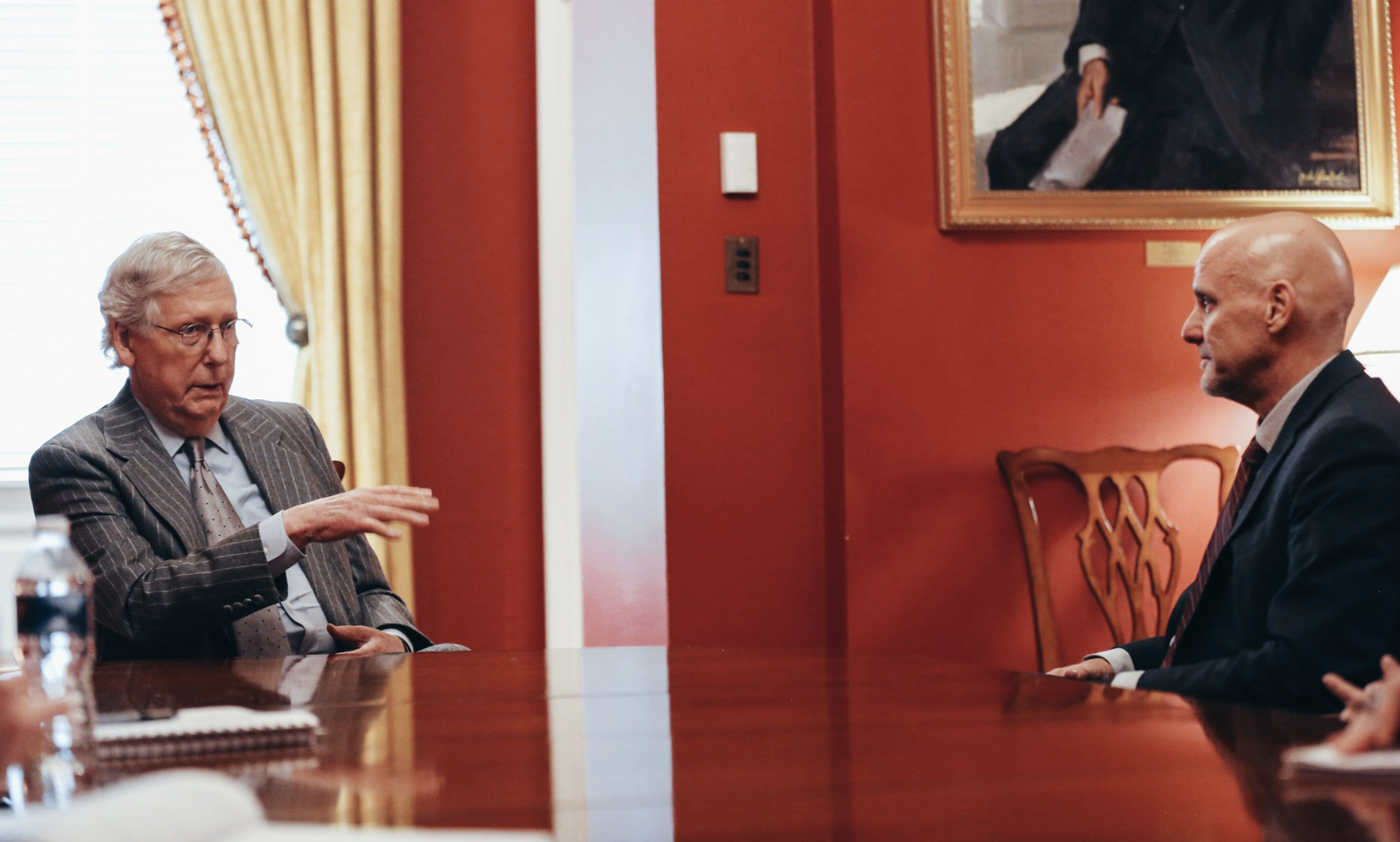 Senate Majority Leader Mitch McConnell (R-KY) met with the nominee to become the next Food and Drug Administration (FDA) commissioner on Wednesday and discussed the need for a regulatory framework for CBD products.

While there are few specific details available about their conversation, McConnell said he emphasized the importance of hemp legalization for Kentucky farmers and pointed out that those producers are also facing challenges given the lack of FDA regulations concerning CBD.

“I look forward to working closely with Dr. Hahn on several important issues for Kentucky,” McConnell said in a press release. “Like many Kentuckians who are taking advantage of hemp’s legalization, I am eager for FDA’s plans to create certainty for CBD products.”

As @senatemajldr, Senator Mitch McConnell advocates for #Kentucky priorities with the Trump Administration and discussed his Tobacco 21 legislation, #hemp, and CBD with President @realDonaldTrump’s nominee for @US_FDA Commissioner: https://t.co/GZhkVgPeFV pic.twitter.com/a0gBs9z42u

The majority leader has previously pressed FDA to issue enforcement discretion guidance that prioritizes action against only CBD companies making especially unfounded medical claims about their products while allowing responsible businesses to continue to market their products as the agency continues to develop rules.

McConnell similarly raised his concerns about the importance of expediting CBD regulations during a separate meeting with Acting FDA Commissioner Ned Sharpless in June.

Stephen Hahn, the FDA nominee, was also pressed on CBD issues during a confirmation hearing on Wednesday. Sens. Jacky Rosen (D-NV) and Pat Roberts (R-KS) noted that there’s wide consumer interest in the cannabis products but stressed that more research is needed, barriers to research should be lifted and public health interests should be balanced with policies that support the industry.

Hahn replied that he believed there’s untapped therapeutic potential in the cannabis compound, but he also agreed that there are “unanswered questions that need to be filled in by data and science and research.”

In related developments, several consumer groups have recently expressed concerns about the current status of the CBD market.

Three groups—National Consumers League, Consumer Federation of America and Community Anti-Drug Coalitions of America—announced on Tuesday that they are launching an initiative called “Consumers for Safe CBD” that is designed to “warn the public of the potential risks related to CBD products.”

According to a press release, the coalition will also encourage FDA “to use its existing authority to protect consumers, provide guidance to manufacturers, and encourage further research for FDA-approved CBD treatments.”

Another group, the Consumer Healthcare Products Association (CHPA), launched a citizen petition to FDA last week that implores the agency to quickly develop rules for CBD so that the products can be lawfully marketed as dietary supplements.

“Intense consumer demand and commercial interest has resulted in a flood of CBD products of uncertain quality and unapproved claims already in the marketplace, and this scenario has created an urgent need for FDA action,” CHPA President Scott Melville said in a press release.

“The request in our petition seeks to have FDA utilize the authority it already has to establish a lawful regulatory pathway for manufacturers to bring dietary supplements containing CBD to market,” he said. “Only then will consumers be able to purchase CBD-containing dietary supplements in a manner that ensures product quality, safety, and a level-playing field for enforcement.”