Mexico’s Senate released a report this week that lays out general considerations for lawmakers to keep in mind as the country moves toward legalizing marijuana for adult use.

The report doesn’t make explicit recommendations, but instead details how various jurisdictions around the world have approached regulating cannabis sales.

The document looks at standard considerations in designing post-prohibition models for marijuana, such as product labeling, age restrictions for sales, THC limits, how to manage retail cannabis shops and what methods of consumption to allow.

“The focus should be on ensuring that the minor populations do not have legal access to consumption,” the report says, referring to underage people, adding that it is important to make the health consequences of illegal consumption “widely known,” according to a Google translation from the original Spanish.

There’s also a section dedicated to the need for restorative justice in marijuana legalization legislation.

For example, the Senate summarized a separate 2018 report from the Global Drug Policy Commission and wrote that a priority in transitioning to legalization should be the “interests of people and communities engaged in illegal non-violent activities due to poverty, marginalization or lack of opportunities, and those people who were more negatively impacted by the current punitive efforts of application of the law on drugs.”

The same earlier commission report indicated that a strongly regulated legal market would pose the lowest risk to public health, as opposed to prohibition, decriminalization or unregulated legalization. 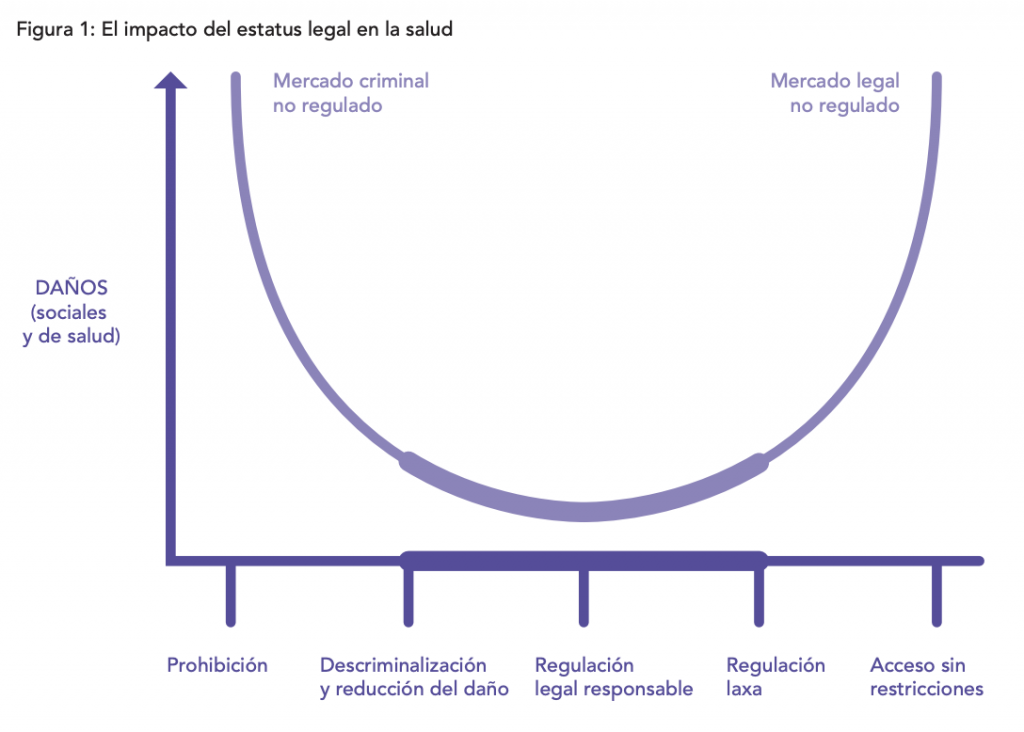 Another important consideration concerns the illicit market, and how the government must “establish a balance between the supply of products, their quality, power and price to reduce the risk of developing, in parallel, a black market.”

Steve Rolles, a senior policy analyst with the Transform Drug Policy Foundation in the UK, who is cited frequently in the legislative report, told Marijuana Moment that “it’s welcome to see the Mexican Senate are engaging in some of the wider international thinking on how to regulate cannabis.”

“It’s important they learn from whats worked and not worked in the U.S., in particular seeing the potential risks of an overcommercialised model where profits can be prioritised over public health,” he said.

The new report offers a timely preview of the kinds of debates that Mexico’s government will have in the months ahead, as legislation to create a commercial marijuana market proceeds. There are currently three legalization bills before the Senate.

“Today, the nation has taken the decision to change,” Olga Sánchez Cordero, now the country’s secretary of the interior, said last year after introducing a legalization bill as a lawmaker. “We don’t want more deaths. It will be a major contribution to bringing peace to our beloved country.”

Separately, the Mexican Supreme Court ruled last year that the country’s prohibition of marijuana consumption was unconstitutional—a ruling that has ignited calls for legislative reform and regulation.

“In Colorado they have more accidents,” the president said in the clip captured by Lev Parnas, an associate of Trump attorney Rudolph Giuliani, who is at the center of the Ukraine scandal that led to the president’s impeachment. “It does cause an IQ problem.”

Chief Brian Manley said he would continue to enforce marijuana laws the day after the city council unanimously approved stopping arrests and tickets for low-level cases.

The day after the Austin City Council approved a resolution to stop arresting or ticketing people for most low-level marijuana possession offenses, the police chief made clear he had no plans to do so.

“[Marijuana] is still illegal, and we will still enforce marijuana law if we come across people smoking in the community,” Chief Brian Manley said during a news conference Friday afternoon.

Though cracking down on those in possession of small amounts of marijuana has never been a priority for the department, he said, police will continue to either issue tickets under the city’s “cite-and-release” policy or arrest people if officers “come across it.”

The difference, according to City Council member and resolution sponsor Greg Casar, is that the council’s move now guarantees those actions will come with no penalty. Tickets will be meaningless pieces of paper and any arrests will result in a quick release with no charges accepted from prosecutors, he told The Texas Tribune after the news conference.

“What has changed since yesterday is that enforcement, almost in virtually all cases, is now handing someone a piece of paper with no penalty or no court date,” Casar said.

The move by the City Council came as a direct result from Texas’ new hemp law which complicated marijuana prosecution across the state. Last summer, when lawmakers legalized hemp, they also changed the definition of marijuana from cannabis to cannabis that contains more than 0.3% THC, the psychoactive ingredient in the plant.

Many prosecutors, including those in Austin’s Travis County, now won’t accept pot cases based on look and smell alone, requiring lab testing to determine THC levels before accepting a case. Such testing is not yet available in public crime labs, though some counties and cities have spent money to obtain test results from private labs.

The council’s resolution prohibited using city funds or personnel to conduct such testing in non-felony marijuana cases. It also directed the elimination, to the furthest extent possible, of arrests or citations for cannabis possession. As Manley also noted, the resolution clarifies it can’t technically decriminalize marijuana, since that is state law.

The resolution gave the city manager until May 1 to report back to the council on how police were trained in this new resolution, and Casar said he hopes Manley reviews his policies before then.

Manley said in the news conference that he would continue to review the resolution, as well as police policies.

But, he assured, “a City Council does not have the authority to tell a police department not to enforce a state law.”

During a town hall event at an Iowa college on Thursday, the 2020 Democratic presidential candidate was asked whether he would take initiative and allow veterans to access medical marijuana if elected. Yang replied he “will be so excited to be that commander-in-chief” that he would not only end federal cannabis prohibition but would go one step further by legalizing the psychedelic fungus for veterans as well.

“We need to get marijuana off of the Controlled Substances Act and legalize it at the federal level, make it freely available,” he said. “I say this because I’ve talked to hundreds of veterans and other Americans who benefit from marijuana as a pain relief treatment, and it’s much less deadly than the opiates that many, many people are using for the same conditions.”

“I’ve talked to veterans who’ve also benefited from psilocybin mushrooms,” he added. “They said it was the only thing that actually has helped combat their PTSD. I’m for legalizing psilocybin mushrooms for veterans as well. Pretty much if it’s going to help a veteran, we should make it easier, not harder, for them to get access to it.”

Yang’s drug policy reform platform is unique in that respect. While the majority of Democratic candidates support marijuana legalization, he’s pushed unique proposals such as decriminalizing possession of opioids and making psilocybin mushrooms “more freely available” for therapeutic purposes. The candidate also wants to invest federal funds in safe injection facilities where individuals can use prohibited drugs in a medically supervised environment and receive help getting into treatment.

He hasn’t gone so far as embracing the decriminalization of all drugs, as former South Bend, Indiana Mayor Pete Buttigieg has, however.

At the Iowa town hall, Yang went on to say that he’s particularly interested in legalizing marijuana, and he again pledged to “pardon everyone who’s in jail for a non-violent marijuana-related offense because they shouldn’t be in jail for something that’s frankly legal in other parts of the country.”

“And I would pardon them all on April 20, 2021, high-five them on the way out of jail and be like, ‘things got a lot better in the last year,'” he said, referencing the unofficial cannabis holiday 4/20.